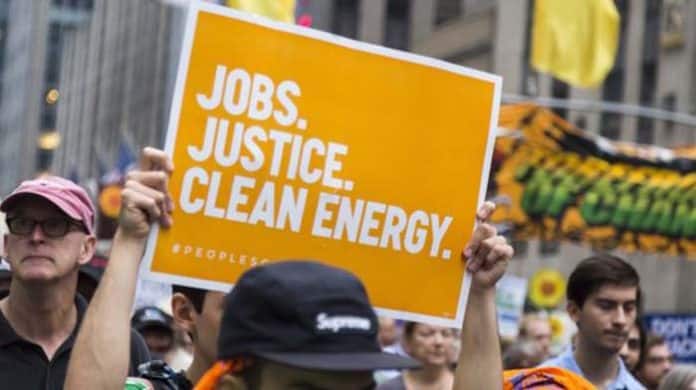 One lesson from the disastrous federal election is that the current climate debate is leaving workers in communities dependent on fossil fuel extraction concerned about their future.

This left the door open to right-wing, pro-coal parties.

One Nation championed climate denial and ran two coal miners as candidates in coal mining areas: Stuart Bonds, a CFMMEU member, received 21.6 per cent of the vote in Hunter NSW while the ALP lost 14 per cent. In Capricornia in Queensland, Wade Rothery won 17 per cent and the ALP lost 14 per cent of the vote. This has led to some Labor MPs drawing the conclusion that party has to be more explicitly pro-coal.

What is actually necessary are more explicit and forward-looking plans for jobs that communities can trust. We need to campaign for a real climate transition plan that includes good unionised jobs across the economy, including a jobs guarantee for workers and communities currently reliant on fossil fuels.

Decarbonising the economy requires massive investment in new infrastructure and industries. An important first step is a plan for a rapid transition to 100 per cent renewable energy.

However, the efforts to build renewable energy are currently being left to private investors and the free market. Even where there are public subsidies, or loans from the Government’s “Clean Energy Finance Corporation”, projects are built and owned by private companies, and run for profit. The result is an overriding emphasis on cost cutting, as energy generation projects and technologies compete against each other within the National Electricity Market.

This is leading to a race to the bottom for workers in these industries. In contrast to the heavily unionised coal industry, there is little union organisation in the renewables industry and many existing jobs are poorly paid.

A just transition is impossible unless new industries can offer good jobs. Unfortunately, workers’ experience of industry transitions in Australia is not good—an ACTU report shows that only one-half to one-third of displaced workers find an equivalent job.

It is critical that the climate and union movement ensure that action on climate change does not come at the expense of decent jobs and workers’ pay and living standards.

A race to the bottom for workers

The cut-throat competition that dominates the renewables industry leads to constant attempts to drive down working conditions. While 11,000 jobs were created in construction of large-scale renewable energy in 2018 and another 3000 ongoing jobs, this work has been largely casual, low paid, and often dangerous.

There are virtually no programs in place for workers in high-emissions industries to transition to renewable energy, and no industry-wide agreements or minimum labour standards in the industry.

This is even the case when renewables companies are receiving government subsidies or participating in “reverse auctions” run by state Labor governments.

Electrical Trades Union (ETU) Queensland and NT secretary Peter Ong warned of a, “wild west, get away with what you can until you are caught, mentality within the solar industry” when solar company RCR Tomlinson announced their bankruptcy in November 2018. At the time, the company was responsible for eight of the 22 solar projects completed or under construction in Queensland, more than any other company, and at least another two projects in Victoria. Peter Ong described the company’s failure as due to, “significantly undercutting competitors during the tender process” which, “delivered nothing but a race to the bottom on wages, safety and conditions”.

At the RCR site in Kerrang, Victoria, the ETU found unlicensed backpackers performing electrical work, and at least one received a serious electric shock. After a complaint, the regulator ruled that RCR had to use licensed electricians for the remainder of the project.

The pattern was repeated at RCR’s next project in Wemen, Victoria. The company’s CEO quit a few months before the bankruptcy, taking a $1 million payout and $10 million in shares.

At the Ross River solar farm being constructed outside Townsville, the ETU discovered four migrant workers being paid $40 per day and eating only plain rice, as they were unable to afford any other meals. Unionists raised money for them and forced the employer to provide backpay, but the workers were soon dismissed.

The CEPU in South Australia was able to secure a good union agreement at the Taliem Bend solar farm, with permanent jobs and good facilities. The CEPU and ETU are fighting to ensure that the Taliem Bend standard is spread to all solar farm projects. But they describe the site as the “exception” to the “sub-par pay and conditions” that are “the deplorable norm” in the industry.

At the Bangala site in Port Augusta, the largest solar farm in Australia, 150 workers were effectively locked out in October 2018 after the labour hire company that brought them to the site tried to force them to sign contracts once they arrived on much worse conditions than they were promised. Workers contacted the CEPU and CFMEU, but when they showed up for work found a contractual dispute between the labour hire company, the subcontractor and the owner left them with no employer, no work and no pay.

In February of that year, a worker was killed on the same site, and in December another worker at the site was hospitalised after an electrical shock. The site is regularly subject to dangerous dust storms—but there is only room for 50 workers in crib rooms, although there are up to 350 people on site at a time.

In NSW the CFMEU construction division has union agreements with most mobile crane companies. But contracts to build wind farms have often gone to non-union companies, and the union reports many safety issues on sites, as well as underpayment of wages specified under their enterprise bargaining agreements.

Fighting for a public renewables industry

Despite recent attacks from employers leading to growing casualisation, working conditions in the coal industry still reflect over 100 years of struggle, and unions remain strong.

Public ownership and investment will be crucial in planning these new systems and securing a just transition to these jobs. In April the Queensland government established a new public renewable energy company called CleanCo. The power industry in Queensland remains state-owned, thanks to a series of determined union campaigns.

Two existing government-owned hydro power stations, a pumped hydro storage facility and a gas generator, along with their workers, have been transferred to CleanCo. The state government also says it will also invest $250 million in 1000 MW of new renewable energy through CleanCo, about half the capacity of a large coal-fired power station.

Employees transferring to CleanCo from either state-government corporations CS Energy or Stanwell (which operate coal-fired power plants) will maintain their existing conditions, including no forced redundancies or relocations. New CleanCo employees will also be on the same terms and conditions. This is a model that needs to be expanded, and that other state governments should follow. The ETU are calling for all state renewable energy to be built through CleanCo, and for the profits from state-owned firms CS Energy and Stanwell to be invested in renewables.

But at present the Queensland government is still expecting private investors to deliver the bulk of its planned renewable energy target of 50 per cent by 2030.

The Queensland government has also brought in a new Safety Code of Practice for solar farms, the first in Australia. The Code requires licenced electrical workers to install solar facilities above 100kW. The Code was developed following a safety audit of solar farms across the state in late 2018 which resulted in 67 statutory notices being issued for breaches of work health and safety and electrical safety laws. These included unlicensed electrical work, non-compliant electrical installations and inadequate safe work method statements and emergency plans.

It is also critical that systems are put in place for workers to transition directly from high-emissions to low-emissions jobs, and that jobs in renewables are secure union jobs.

The climate movement needs to take up this fight.