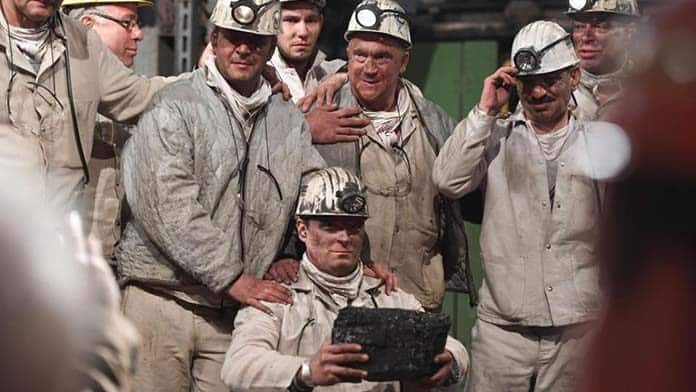 While Australia plans to open new coal mines, Germany is in the process of closing down its mining sector.

The last of the black coal mines in the historic industrial centre of the Ruhr Valley was decommissioned in 2018, although other coal mines remain. In the face of catastrophic climate change and an urgent need to transition away from coal-fired power, Germany is an example of how a just transition could work in practice.

At the height of industrial coal mining, Germany was producing 150 million tonnes of black coal and employed 607,000 miners in the fossil fuel industries. In 1957, the coal, iron and steel industries provided 70 per cent of the jobs in the Ruhr region.

The industry’s decline began because mining coal underground in deeper and deeper shafts became more expensive than importing it from elsewhere. By the 1980s the industry was already in sharp decline, and required large government subsidies to continue operating.

The government began investing heavily in re-training for new industries such as engineering, business and technology. Since 1961, there have been six new universities, 15 technical colleges and 60 research facilities built in the Ruhr.

Together with funding for the environmental clean-up of old mines, this meant the same number of jobs were created in new service industries as were lost in coal and steel between 1957 and 2000.

By 2007, coal industries accounted for less than 2 per cent of total employment. That year an agreement was struck to close coal mining in the region altogether, although coal-fired power stations and manufacturing continue.

Staggered mine closures aimed to ensure not a single worker was sacked. A just transition package provided early retirement schemes as well as training and on-the-job certification to move into other industries. Unions have ensured that former miners are entering high-wage, high-skill industries and secured substantial pay outs for people leaving the workforce altogether. However the process of closure took 11 years, allowing 10,600 workers to transfer to work at other coal mines during gradual closures.

The German transition has been pro-active and long term, allowing for new jobs and investment to fill the hole left by the coal industry. By contrast the Hazelwood coal power station and mine in Victoria closed with just five months’ notice.

Germany has sought to reinvent itself as a leader in new energy production, focusing on environmental technologies and renewable energy as well as playing on the existing strengths, skills and industry of the Ruhr region. Two of the world’s leading wind turbine manufacturers, for instance, are companies in the Ruhr that formerly produced coal mining equipment.

This all required large-scale public investment, to the tune of 14 billion euros in grants to stimulate the local economy, with a further 26 billion euros for research and development programmes. These funds are being used to build new infrastructure projects such as road and rail, as well as sports and recreational facilities, and investment in leisure and cultural industries including eco-tourism.

Germany continues to use significant amounts of coal, which produced 29 per cent of its energy last year. Much of it is cheap and heavily polluting brown coal.

But in January 2019, the German government announced it would also be shutting down all remaining coal power stations along with remaining brown coal mines by 2038.

However, the transition is not without fault. It would allow the burning of coal to continue for another two decades. This is too slow compared to what is needed to meet Paris Agreement targets to keep global warming below 2 degrees. Germany looks unlikely to reach its 2030 target of 55 per cent emissions reduction until 2046, according to a McKinsey study.

And it is currently constructing a brand new coal power station, Datteln 4, the only one being built in Western Europe.

Its plan also relies mainly on private investment in new industries, with companies being encouraged to invest through tax cuts and regulatory exemptions. We need to fight for 100 per cent publicly-owned renewable energy to ensure that investment reflects what is needed to maintain energy production, and not what is profitable for the capitalists.

While the German transition is not perfect, it shows how a properly funded and planned transition away from fossil fuels can ensure secure, well-paid union jobs are at the heart of new industries.

The Morrison government is desperately trying to keep coal power stations running, committing millions of dollars in subsidies. Australia should take a leaf out of Germany’s book and ensure that public investment is spent on new infrastructure projects and public renewable energy to ensure that every coal worker has a good, union job to transition into.