Klein film foregrounds fight for the climate, but skirts what we’re up against 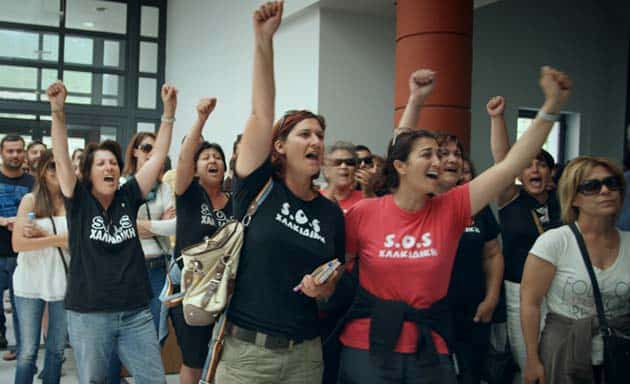 This Changes Everything was screened around the world in the lead up to December’s climate summit in Paris to promote the People’s Climate March. The focus of Avi Lewis and Naomi Klein’s film is the front-line struggles around the world against fossil fuel expansion and exploitation.

Klein knows saving the planet is a battle, and she speaks to people resisting the day-to-day impacts of climate change. No time is wasted talking to smooth politicians, “green” business entrepreneurs, or suited experts. This in itself puts the film well ahead of the pack.

The film’s release follows Klein’s book of the same name, subtitled “Capitalism vs. the Climate”. But the film shies away from the book’s unapologetic spotlight on the capitalist system. Elsewhere, Klein has denounced the corporate influence over climate negotiations, questioned the value of carbon pricing “solutions”, and called for a direct approach to cutting emissions based on “planning and banning”. But little of this makes it into the documentary.

The film adopts a more ambiguous framework, blaming the “story” humans have been telling ourselves, that we can control nature without any consequences.

Nevertheless, the documentary is filled with gems, particularly the story of the ongoing campaign against the Canadian Eldorado company in Halkidiki, Greece.

This is the site of a collision between the environmental and economic crises. Suffering austerity and unemployment, the residents have been assaulted with Eldorado’s propaganda campaign promising “development” and jobs. But most residents aren’t buying the blackmail.

They say the mine will turn the area into a barren industrial zone, create minimal jobs on “starvation wages”, while destroying many others. The anti-capitalist coalition Antarsya has dubbed it, “the violent imposition of a Third World model of ‘development’”. Demonstrations of thousands have continued for several years. The radical left Syriza party promised to halt any further work on the latest mine, but abandoned this promise in government.

Mary Christianou of the Halkidiki Citizen’s Committee insists on getting to the core of the problem. “And what is the core of the problem?” Klein probes. The woman laughs nervously, “You want me to say it on camera?” Klein reassures her. “I would say it’s the economic system…capitalism, I guess”. “You’re not sure if you should say that on camera?” Klein asks. “I don’t know if it helps the struggle.” It feels like a window into Klein’s own mind.

Towards the end of the film she has another stab: attending a Heartland Institute conference of climate deniers, she films one speaker warning that sustainability is a “green Trojan horse whose belly is full with red socialist economic doctrine”. To her credit, Klein suggests they just might have a point here!

The film’s theme is that climate change is about people, not polar bears and ice caps. Klein deals with oppression and inequality, such as the racism suffered by the original inhabitants of the Alberta Tar Sands area, the Beaver Lake Cree Nation. Despite having formal land rights, Crystal Lameman, a young indigenous activist, is hurled back at every attempt to access her land and survey the damage done by the mammoth oil fields.

Klein also grapples with the consequences for workers in the fossil fuel industry. A young boiler maker, Liam, tells her he has friends working in the Tar Sands and he would not support shutting it down today or tomorrow—but that if stable clean jobs were available as an alternative, nobody would miss the gruelling work.

Elsewhere the film challenges the myth that the fossil fuel industry is pulling everyone out of poverty in rapidly developing India. She visits communities living under the shadow of colossal coal-fired power stations, urged to give up their fishing and take jobs in the plant. But they’ve seen it before, and say they will be spat out and end up beggars.

Viewers are reminded that the agents for change exist in all countries—it is not up to activists in the global north to campaign against the fossil fuel industry of the global south. We have our own governments to reckon with.

The focus on struggle from below is the film’s strength. And it is no accident that it is Greece where the filmmakers encounter a critique of capitalism—a country where strikes, occupations, and experiments in workers’ control have been features of the resistance to austerity.

Avoiding this issue is a mistake. The climate movement needs to understand what it is up against, and the kind of change that will be necessary to stop climate chaos.

Spelling this out would have added punch to Klein’s otherwise spot-on take home message, “we can seize the existential crisis of climate change to transform our failed economic system into something radically better”.

This Changes Everything
Directed by Avi Lewis
Limited screenings