Morrison lies as the planet dies—drive him out 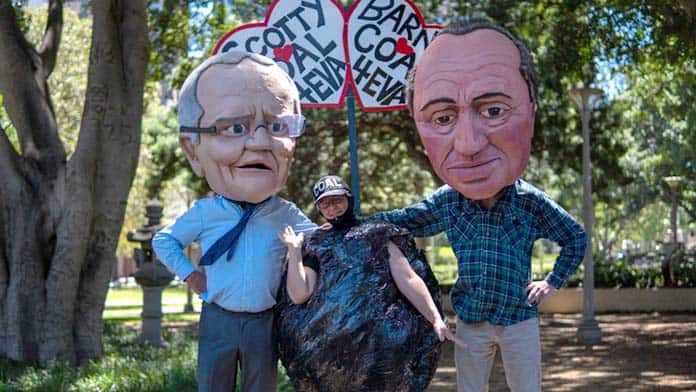 Scott Morrison’s approval rating has hit its lowest point since the 2020 bushfires in the wake of his humiliating trip to Glasgow for the COP26 climate summit.

Australia was widely seen as blocking climate action, refusing to lift its 2030 target beyond the figure Tony Abbott set six years ago. The government refused to join either the agreement of 40 countries to phase out coal power, alongside other major coal users like Canada, Poland and Indonesia, or the pledge to cut methane emissions by 30 per cent in ten years.

Embarrassing video footage showed Morrison struggling to find another world leader who would even shake his hand.

And Morrison was blasted as a liar by French President Emmanuel Macron over the decision to acquire nuclear submarines from the US or Britain, cancelling the contract to build submarines with France. Former Liberal Prime Minister Malcolm Turnbull added fuel to the fire by volunteering that, “Scott has lied to me many times.

But the real scandal is not deceiving France but spending tens of billions of dollars on nuclear submarines that will deepen the arms race and cold war with China. The estimated $100 billion being thrown at these weapons of war could deliver a dramatic shift to renewable energy and climate jobs.

All this comes as the government prepares for an election between March and May.

Morrison now trails Labor by almost 54 to 46 per cent in two-party terms. His long-delayed adoption of the net zero by 2050 target is a fraud. The “plan” to reach the new target contained no new funding or policies to get us there. There was literally nothing more than the vague hope that new technologies would fix the problem.

The Coalition has spent years denying the reality of global heating. Morrison himself famously paraded a lump of coal in parliament.

But it now fears losing inner city Liberal seats over its climate failures and is even under pressure from the Business Council of Australia, which is worried companies will miss out on business opportunities in low-emissions technologies.

Yet even as he pretends to want action, Morrison insists he will be “preserving our existing industries”. And he is doing all he can to expand fossil fuels, using millions of taxpayer dollars to help open new gas fields at Narrabri in NSW and the Beetaloo basin in the NT, alongside new gas power plants.

In coal-dependent communities in Queensland and the Hunter in NSW the fear of job losses remains potent. Morrison and Nationals MPs want to repeat their efforts at the last election to win votes through supporting coal mining.

But it is now clear that Morrison is caught straddling conflicting demands—while pretending to support climate action, his solution is “can-do capitalism”.

Climate change is now a major weakness for Morrison.

Yet Labor is still hopelessly timid. The possibility of creating thousands of jobs in renewable energy, from solar power to offshore wind, becomes clearer every day. But instead of guaranteeing jobs, Labor has adopted a small–target policy.

It says the government should do more but has released little policy of its own. It even supported Morrison’s refusal to sign the pledges to phase out coal or reduce methane emissions. And it won’t clearly oppose his plans to expand gas fields either.

Serious government investment in publicly-owned renewable energy, and electrifying transport, manufacturing and heating, could provide good-quality jobs and rapid action. But Labor still wants to rely on business and the market instead.

The climate movement needs to go on the offensive. Pre-election rallies to demand climate action and jobs can help drive Morrison out. But the fight for climate justice won’t end at the election. Protests now can start putting pressure on Labor and build the basis for the protests and union action that can stop expanding gas fields and millions more being wasted on the Kurri Kurri gas power plant.

“System change, not climate change” was the call from the climate protests in Glasgow. Every strike and union campaign between now and the election will help build the struggle for real change from below.

Delivery drivers at Toll, LinFox and others have already won improvements on job security. Warehouse workers at Country Road are on indefinite strike to win a pay rise.

On the docks at Patrick, the maritime union has postponed industrial action over fears of the company using the law to ban strikes. But now is not the time to retreat.

Workers here can take inspiration from “Striketober” in the US, where essential workers have begun to use their increased bargaining power due to labour shortages to demand better conditions.

The Liberals have presided over a decade of record low wage growth. Building every bit of struggle can help to throw them out and lay the basis for the system change and the socialist alternative we really need.