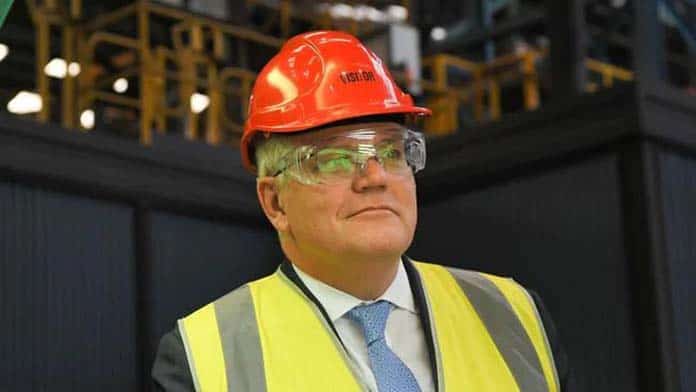 In a series of energy announcements, the Morrison government has doubled down on its climate denialism and thrown its support behind a “gas-fired recovery”.

The government says this is needed to keep energy prices down when the Liddell power plant closes in 2022-2023.

Two separate government reports have said this is not necessary. AGL already intends to build a small gas peaking plant in the Hunter Valley as part of a package of measures to replace Liddell.

Days later Morrison wound back his claim to say that only 250MW would be necessary.

After a summer of deadly fires, there is strong public support for action on climate change.

Instead, Morrison has rejected the target of reaching net zero emissions by 2050 agreed at international climate talks and included in the Paris Agreement.

Gas is largely composed of methane, a potent greenhouse gas when released directly into the atmosphere during mining, which also releases carbon dioxide when burnt.

The decision to target the Hunter Valley coal region is no accident. Morrison and Taylor are intent on continuing the campaign that proved successful around the Adani coal mine at last year’s election: pretending to support jobs and workers in fossil fuel industries, and giving fossil fuel companies a green light for ongoing expansion.

Labor has responded by again attempting to have a bet each way: saying it supports the role of gas while also wanting to boost the use of renewable energy.

A few days later Morrison and Taylor went to the Port Kembla steelworks to announce that funding for the Australian Renewable Energy Agency would continue, but with a changed mandate allowing it to fund carbon capture and storage, hydrogen technologies and programs to reduce businesses’ energy bills.

Carbon capture and storage has been promised for years as a way to allow continued use of fossil fuels. But it can only take place in areas with the right geology—mainly those where gas extraction is already taking place such as northwest Australia and the Bass Strait. So it is mainly a way to prolong gas extraction while claiming it is low-emissions.

These announcements all fed into the government’s first “Low Emissions Technology Statement,” part of its Technology Roadmap.

The statement declares that wind and solar are already “mature technologies” with no need for public funding or support. Instead it will focus on hydrogen (including hydrogen produced from gas and coal), energy storage, low emissions steel and aluminium, carbon capture and storage, and soil carbon.

Instead of targets for emissions reduction, its targets are for delivering these technologies at a competitive market price.

The $18 billion of funding over ten years announced with the Roadmap rolled in many of the previous energy announcements, including funding for ARENA and the Clean Energy Finance Corporation.

The Roadmap has at least backed away from supporting nuclear power, which was included the earlier consultation draft, and is being spruiked by One Nation, sections of the Liberals and Nationals, and the AWU and the Victorian branch of the CFMEU Mining and Energy division.

The Electrical Trades Union have declared the Roadmap to be “hot air” that delivers little to support clean energy, far less renewable energy jobs, cheaper power or lower emissions. They say the priority should have been upgrading and maintaining the electricity grid so it can accommodate a shift towards wind, solar and hydrogen power.

Concrete planning and coordinated public investment in the electricity system is urgently needed to achieve a transition.

While the Australian Energy Market Operator has developed a plan for a renewables-based energy grid, it is based on a range of possibilities for future climate action, not clear emissions reduction targets or timelines. The plan prioritises minimising cost, and doesn’t include any consideration of a just transition.And the actual management and operation of the grid is so fragmented that it is unclear who can actually deliver the plans they are making.

Planning and support are also necessary to ensure a just transition where workers’ jobs, wages and conditions are protected.

This is the only way to counter Morrison’s efforts to present a climate transition as a threat to fossil fuel-dependent communities.

It is critical for the union and climate movement to break the idea that a climate transition is a threat to jobs, and win the argument for massive investment in public renewable energy and climate jobs.