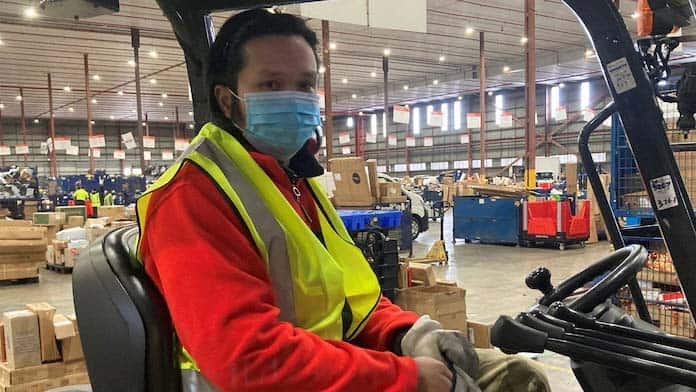 Scott Morrison is forcing workers into unsafe conditions and fuelling the spread of COVID through new rules designed to protect business profits.

The Omicron surge is putting enormous strain on the workforce, with staff shortages across supermarkets, deliveries, hospitals, aged care and other essential industries. Business has been demanding watered down COVID rules so it can force close contacts and even COVID positive workers back to work.

The Australian Industry Group’s Innes Willox declared that staff isolating or off work sick were “a handbrake on the economy” and demanded new “rules that allow businesses to maintain as strong a workforce as possible”.

Morrison already revised close contact rules in late December, narrowing them to household contacts with four hours exposure, and others deemed a high risk by health authorities. This meant those exposed at work were no longer automatically deemed close contacts.

Now Morrison and the state premiers will allow workers in a wide range of basic industries including health care, agriculture, delivery, energy, resources, media, education and childcare to work even if they are deemed close contacts. Workers are required to have a rapid antigen test the day after their exposure in order to work—but with the tests impossible to find some employers will simply ignore this.

NSW previously recommended a rapid test every day before work for close contacts—but this has now been watered down even further.

The Transport Workers Union’s Michael Kaine slammed the changes, saying, “Scrapping isolation requirements for transport workers is beyond reckless—workers are being thrown to the wolves.”

Employers are pushing for more and more industries to be given exemptions—from construction to banking and real estate.

ACTU Secretary Sally McManus has reported that employers are already demanding staff who can’t access a test turn up to work, even if they feel sick.

Teys Australia, a supplier of meat to Woolworths, has made COVID positive workers in South Australia turn up for shifts, making them wear yellow hairnets so others would know they were infected. Disgracefully, SA Health confirmed it had approved the plan.

Morrison’s failure to prepare means we don’t have the rapid tests needed to keep workplaces safe. This is despite numerous health experts telling the government months ago that PCR testing could collapse once Australia faced a serious outbreak. Unions have been calling for wider use of rapid tests at workplaces since at least June last year—but Morrison failed to listen.

Instead he has dismissed calls to provide free rapid tests at workplaces and for the general public, saying, “We can’t just go round and make everything free.”

When the pandemic began, the government introduced JobKeeper, funded free PCR testing and praised “essential workers”, saying we were “all in it together”. That was always a lie, with businesses rorting JobKeeper to boost profits and casual workers thrown on the scrap heap. But now Morrison’s failures are more obvious than ever, with the health system buckling and workers left to fend for themselves as COVID cases surge.

Staff shortages everywhere are again showing that workers are essential to keeping society running. But Morrison and the bosses’ contempt for essential workers and their health is now on full display.

Two years into the pandemic, none of the problems exposed at workplaces as a result of casualisation and lack of government funding have been fixed. Hospitals are at breaking point due to staff shortages and the surge in hospitalisations.

Aged care centres are in complete crisis, also short of staff even before the Omicron outbreak, the product of years of underfunding. Aged and Community Services Australia CEO Paul Sadler told the Sydney Morning Herald, “Right now we have staff isolated, leaving the sector and homes that have severely depleted rapid test supplies and PPE shortages.” And there have again been vaccination delays, with 40 per cent of federally funded aged care homes still waiting for booster shots. Aged care centres should have been among the highest priority.

Casuals still have no access to paid sick leave, forcing many to head into work even if they’re sick. With COVID payments wound back, workers are again losing pay when isolation requirements reduce staff and force businesses to close.

Morrison refuses to fund free rapid tests or the hospital and aged care staff needed, yet has just announced another $3.5 billion in spending on 120 new tanks and military hardware. The priorities of capitalism are on stark display—with workers’ health less important than business profits and state power.

Every worker has the right to a safe workplace. Morrison’s changes will mean some workers will be forced to risk taking the virus home to vulnerable family members with serious health conditions who are at higher risk.

Workers have the right to stop work if they are put in unsafe conditions. Throughout the pandemic bosses have looked to cut corners on safety to protect their profits. Cleaners at Westmead hospital, bus drivers in Sydney and supermarket distribution centre workers, among others, have all taken stopwork action and won increased safety measures at work over the past year.

We need much more of this. Companies running short staffed are particularly vulnerable to stopwork action that threatens to shut them down completely.

Union leaders are talking about a push for big pay rises this year in enterprise bargaining to make up for years of stagnating wages and rising inflation. We need a union fightback to make sure workers get the pay, safety and proper funding for services that we deserve.