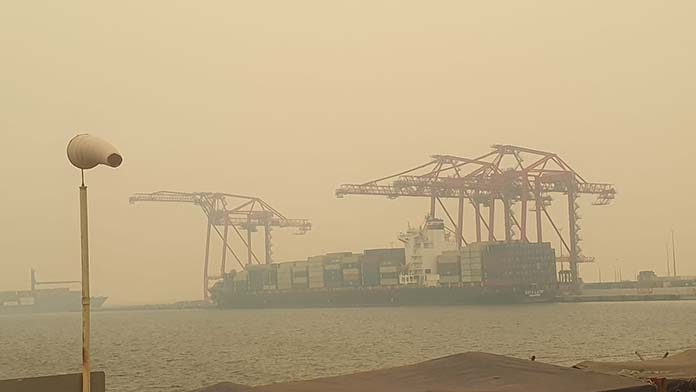 Air pollution and smoke has blanketed Sydney for days, as bushfires continue to burn across the state. Up to 100 workers, members of the MUA, at Port Botany refused to work as smoke reached hazardous levels last Thursday.

“The workers who aren’t in air-conditioned areas [were] stood down and sought to work through safety issues with the company and the regulator,” MUA Deputy Branch Secretary Paul Keating told the ABC.

The MUA convened a port safety committee which called on the port operators to re-schedule all outdoor work when smoke pollution reached levels on the official NSW government Air Quality Index (AQI) described as “very poor” or “hazardous”.

Work also stopped on the NorthConnex and M1 Pacific Highway road projects due to air quality and visibility problems.

“At sites where there is a clear threat to well-being we are stopping work,” the AWU’s Daniel Walton told Nine Media.

In the ACT around 90 per cent of construction sites were shut down on Monday due to similar safety issues.

Under existing industrial laws workers have a right to stop work when there is a serious risk to safety. But asserting these rights requires strong workplace union organisation. Even at Port Botany the stevedoring bosses tried to force work to continue in hazardous conditions.

“Two companies have threatened our members with outrageous claims that it’s illegal industrial action,” Keating said, “but these are legitimate safety issues and under the safety laws workers are protected.”

The toxic smoke from the bushfires are an immediate health risk. We need our unions to implement policy to make sure that the risk to workers’ health is minimised.

The biggest concern is the level of microscopic particulates or PM 2.5, which are so small they can enter the bloodstream and cause heart attacks, lung disease and even cancers. Sydney’s air has become so polluted that breathing it has been the equivalent of smoking between four and ten cigarettes a day. In one area of southwest Sydney the toxic smoke was equivalent to 34 cigarettes a day, as the AQI index hit 680.

Action around the immediate impacts also needs to be connected to the wider social threat the fires pose. The NSW Liberal government has cut funding for rural firefighters and cut back jobs and resources for land management and back burning.

The Liberals’ cuts have made it harder to fight these bushfires. But their unwillingness to do anything about climate change means that these fires are a sign of things of to come.

Almost the whole of NSW is stricken by drought and western rivers are running dry. Yet neither of the Liberal governments, state or federal, take climate change seriously. They will do nothing to fund the transition to 100 per cent renewable power under public control.

The federal government has recently folded environment issues into a new Department of Agriculture, Water and the Environment, to make it clear that its priorities are with agribusiness that has been robbing the water to boost their production and profits. Both governments are still considering sinking tens of millions of dollars into extending the life of coal-fired power plants (like the ageing Liddell power station) rather than renewable energy projects that can create jobs and cut carbon emissions.

Strike back for climate

As the statement from the MUA put it, “Catastrophic climate change is real, and is right now having an effect on workers on the job.”

Climate change is a class issue—the worst impacts are going to be felt by workers and the poor. Those already working in unsafe or dangerous conditions are at particular risk.

When workers at Port Botany refused to work in the dangerous smoke the bosses threatened them with fines because they were taking illegal industrial action.

Workers need the right to strike—to both fight for protection against toxic smoke, heat stress and other immediate effects of climate change and to fight the root cause of climate change—the Liberals and the corporate bosses who want to maintain business-as-usual and their profits while NSW and the planet burns.

Many workers joined the global Strike for Climate on 20 September. We need more workers and more unions to join the protests for climate action to step up the fight.