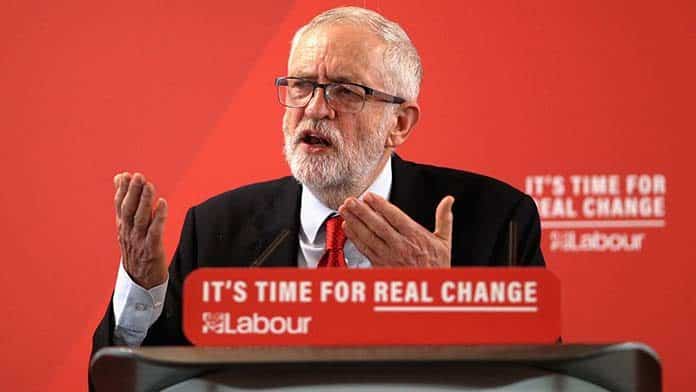 Corbyn has already said he will stand down as leader after the party spends a period analysing what went wrong.

But the result is less a rejection of Corbyn’s left-wing policies than a judgement on his compromises over Labour’s position on Brexit.

Labour lost heartland seats across the old industrial midlands and north of England, where strong majorities had voted for Brexit in the 2016 referendum. Its vote fell by over 10 per cent on average in the areas that voted most strongly for Leave. Some former Labour votes swung to the Tories, others simply abstained.

Brexit has been the defining issue of British politics for at least two years—through then Prime Minister Theresa May’s attempts to negotiate a deal with the EU acceptable to her party, and capable of passing parliament.

It was also the centrepiece of Johnson’s campaign, as he declared he would “Get Brexit done”.

After becoming Tory leader in July he managed to strike his own Brexit deal, taking it to the election with a promise to have Britain out of the EU by 31 January.

This does not mean that all those who voted for the Tories are nationalistic or anti-migrant.

Johnson was able to pose as a champion of the democratic vote in the 2016 referendum. Many voters just wanted the issue settled after seemingly endless parliamentary bickering.

By contrast Corbyn’s position on Brexit was muddled. When the referendum result was delivered he said he would respect the vote and support leaving the EU. But he moved further and further towards a pro-Remain position, bowing to pressure from right-wing Labour MPs.

During the election campaign, he promised a new referendum on any final Brexit deal, in which remaining in the EU would be an option. And he would not rule out campaigning for a Remain vote in such a referendum.

Throughout his whole period as leader, Corbyn was undermined and attacked from within by his own Labour MPs. His socialist policies, despite the backing of the party membership, were never accepted by the party establishment.

But Corbyn made compromise after compromise with the right in an effort to keep them on board. He accepted the plan to renew Britain’s Trident nuclear missiles at a cost of almost $400 billion. He conceded to the slander from the right attempting to paint Labour as anti-semitic. And he abandoned support for free movement of people within the EU, as part of a policy which criticised the Tories for not meeting their targets on cutting immigration.

This was a result of his commitment to the reformist politics of the Labour Party.

British Labour, like its Australian counterpart, seeks to represent the working class as a whole.  And it is more concerned to win office than to consistently fight for left-wing policies. To win office it needs the votes of both militant trade unionists as well as workers who are more conservative in order to win elections. Corbyn’s concern to hold the part together meant he made constant concessions to the right of the party.

The Labour right is already on the attack, moving to tear down Corbyn along with all his supporters inside the party. They hope to push the party back to the right.

As soon as exit polls showed Labour was in trouble right-wing Labour MP Margaret Hodge rushed to declare, “this is the utter failure of Corbyn and Corbynism. There is no other way of looking at it.”

Here, one commentator in the Sydney Morning Herald declared the result was “Shorten on steroids”. This has been echoed by Labor’s Jim Chalmers, who said Corbyn’s policies had simply preached to Labour’s base instead of looking, “to build much bigger constituencies of support”.

But Corbyn’s socialist policies have been consistently popular.

In the 2017 election he forced the Tories into minority government and increased Labour’s vote by the most in any election since 1945. He also ran an insurgent campaign, featuring mass rallies up and down the country that created a sense there was a real movement for change.

But in the two years since there has been little attempt to build a struggle against the Tories’ savage austerity and pay cuts. Instead Corbyn was drawn into the parliamentary manoeuvres around Brexit and ran a much more conventional election campaign. The hundreds of thousands who joined British Labour to support Corbyn’s radical program to reverse privatisation and scrap university fees were mobilised for door-knocking rather than building a real fight against austerity.

Britain now faces further Tory cuts to the health service and welfare as well as further stalling on climate change. Racists will feel more confident now the man Donald Trump endorsed has been cemented as Prime Minister of the UK.

The reliance on purely electoral politics led to Corbyn’s defeat. Instead of the reformist focus on parliament we need a revolutionary party to further the fight for socialism. The left needs to focus on building demonstrations, strikes and struggle outside parliament in order to win change.