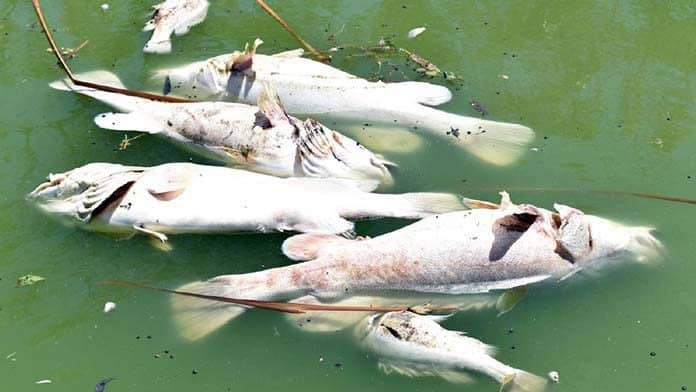 Towns are running out of water and fish are dying in alarming numbers in Western NSW, providing a glimpse of what is at stake as the climate crisis drives temperatures to record levels.

A long, harsh drought has put enormous pressure on river systems, but it is mass irrigation by agribusiness corporations that has pushed the Barka, as local Aboriginal people call the Darling River, to complete collapse.

Walgett, a town in northern NSW on the Namoi and Barwon Rivers which feed the Barka, ran out of water in January when its water system broke. This shut off many air-conditioners as temperatures that month hit an average high of 40 degrees.

The town has relied on dangerously poor quality bore water since the local dam dried up 18 months ago.

Donations of bottled water are being delivered to Walgett, as well as other towns along the Darling River including Menindee, Wilcannia and Pooncarie, where emergency bore water is hazardous to drink. All these towns have large Aboriginal populations.

Mass fish kills near Menindee have seen up to a million fish dead along the river. Lack of water, which has turned the river into a series of muddy pools, produced algal blooms that sucked oxygen from the water, killing the fish.

The state of the Barka is a source of great pain for Aboriginal communities, “It’s our lifeblood—without water we have no name, no culture—nothing”, Barkindji elder Badger Bates from Wilcannia told the Sydney Morning Herald.

SEED—an Indigenous youth climate network, joined with other Aboriginal activists to sit in at Parliament House in Canberra on 13 February, part of a “Water is Life” convergence. The protest demanded recognition of Aboriginal rights to manage water, the release of water used by irrigators back into the Murray-Darling, along with an end to fracking and mining projects draining and contaminating waterways across the country. The NSW Aboriginal Land Council network is also co-ordinating a day of protest on 3 March.

The damage to the rivers is a product of the warped priorities of capitalism. The Morrison government, including National party figures like Barnaby Joyce with control of water management, ensure large amounts of water are in the hands of a small number of huge agribusiness companies. Agribusiness favours water hungry crops like cotton as they are the most profitable, with Cotton Australia chief executive Adam Kay telling The Weekly Times this year that, “historically prices [for cotton] are still sensational”.

One property, Cubbie station in southern Queensland, controls a licence for up to 460,000 megalitres, equivalent to all of the irrigation entitlements downstream in north-west NSW.

Despite the lack of water downstream, storage dams at cotton farms in southern Queensland have been full of water. According to a statement by 12 leading scientists, “as much as 75 per cent of all surface water diversions” in the northern section of the Murray-Darling basin may not be metered at all, meaning there is no proper record of how much water is being taken.

The federal government is spending $13 billion to buy back water allocations from farmers and fund more efficient water use. This program has been plagued by rorts and profiteering.

One agribusiness company, Webster Ltd, chaired by union-buster Chris Corrigan, received almost $80 million in compensation and payments to surrender water allocations from one of its properties, immediately announcing a $36 million profit on the deal.

Another big company, Eastern Australian Agriculture, received $80 million for water rights in 2017, 25 per cent more than what it offered to sell them for.

Some of the purchases have involved buying water rights that only existed in years of exceptionally heavy rainfall. This means that most years they deliver nothing back to the environment at all.

A Four Corners report in 2017 also uncovered evidence that agribusiness was engaging in water theft through tampering with meters.

“It was clear that not just one property was involved”, Jamie Morgan, a Former Manager with the Department of Primary Industries Strategic Investigations Unit told Four Corners, “there was basically an entire river system that was seriously lacking accountability”.

A Royal Commission in South Australia, which reported on 31 January, exposed systemic failures in implementing the multi-billion dollar Murray-Darling Basin Plan. To placate agribusiness, the Murray-Darling Basin Authority has failed to follow the best available science on necessary water flows and ignored the impact of climate change in reducing available water.

The failures were so appalling that the Commission accused the Authority of breaking the law.

As long as the Murray-Darling is managed in the interests of corporate profits and the huge agribusiness corporations, the catastrophes we have seen this summer will continue.