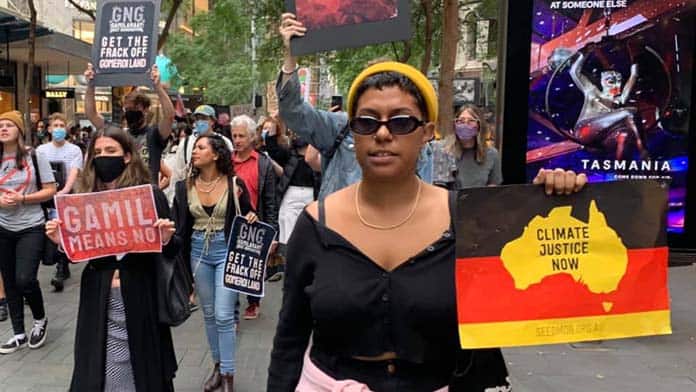 In a historic vote, Gomeroi people overwhelmingly rejected an agreement proposed by gas giant Santos at a Native Title meeting in Tamworth yesterday.

“The vote yesterday was 162—2 with four abstentions. This strong no vote is a continuation of our long struggle against Santos and the state and federal governments who are trying to desecrate our lands.”

“I am here as one vote from Coonabarrabran, but there are many more from our community, including our Elders, who have signed the petition, made submissions to the planning commission and shown their opposition to Santos in other ways too.”

For almost a decade, Santos have been seeking Gomeroi consent for the Pilliga (Narrabri) gas project, that would see 850 coal-seam gas wells established in the Pilliga forest in North-West NSW, an area with deep cultural significance for the Gomeroi.

This project would be an ecological disaster, releasing an estimated 127 million tonnes (CO2 equivalent) of greenhouse gases, threatening many endangered species and contaminating the waters of the Great Artesian Basin.

“We are part of resistance to the gas push happening right across Australia. The climate crisis is getting to a point of no return. Our non-Indigenous allies need to get behind us and make sure Santos and the government respect our no vote.”

Gomeroi people have a registered Native Title claim over the lands being targeted by Santos. While Santos have already received all relevant approvals from state and federal governments to proceed in the Pilliga, they still need to deal with the “right to negotiate” held by Gomeroi under the Native Title Act.

Santos must either form an agreement with Gomeroi to surrender their rights in exchange for a package of benefits or go to the Native Title Tribunal and seek to over-ride these rights.

The entire Native Title system is set up to force Aboriginal people into agreements, with the Tribunal routinely ruling in favour of mining companies if people refuse to sign on. This makes the Gomeroi vote even more significant.

Santos has already filed a “Future Acts Determination Application” in the Tribunal, seeking to over-ride Gomeroi rights, with a two-week hearing set down for 4 April.

As part of the court process, Santos needs to demonstrate that their project is in the “public interest”. The fact that mining is so lucrative for the Australian economy is almost always accepted to be evidence of sufficient “public interest”.

“We will fight attempts by Santos and the Morrison government to sacrifice the Gomeroi Nation and our sites for the financial benefit of a global conglomerate, it’s just reprehensible. We will march in the streets, we will camp outside Parliament, I am calling all people across Australia to action—fight to ensure our vote is respected.”

Santos’s aggressive court action, and the strength of Gomeroi resistance, is building greater opposition to the Pilliga project.

A major meeting of campaigners from different local groups, Gomeroi people and environment organisations held in the Pilliga on 12-13 March committed to a series of protest actions in solidarity with Gomeroi and appealed to the trade union movement to put a “green ban” on the project.

A statement expressing solidarity with the Gomeroi and pledging action to fight Santos has now been endorsed by the MUA, the CFMEU Construction Division, the NTEU and the Electrical Trades Union (ETU). The ETU have already said their members will not work on the project.

“First Nations people should not have to trade away their lands to multinational gas corporations to secure jobs and basic services. Regional and rural communities deserve public investment in jobs in renewables and other sustainable industries needed to avert climate catastrophe.

“I was very proud to stand with Gomeroi people, spend time on their Country and see their strength in action. The MUA is committed to building further union support to ensure no means no!”

Unions and climate justice groups are supporting Gomeroi to protest outside the Federal Court in Sydney on 8 April, during the Native Title Tribunal hearing.

“We have a strong legacy of being known as the mighty Gomeroi. We bring that legacy everywhere we go, including in this meeting room today. It’s going to be a big fight for us to make sure Santos and the government respect our no vote, but I know we have the power to defeat Santos.”