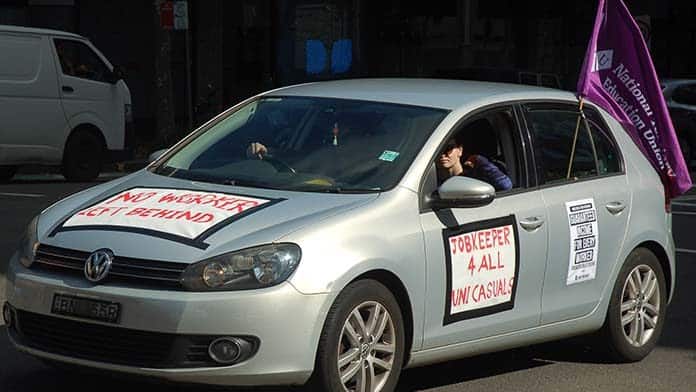 Over 150 cars and bikes joined the May 1 convoy in Sydney today, calling for an end to the efforts to make workers pay the costs of the coronavirus crisis.

Slogans calling for wage subsidies for all workers, including migrant workers and casuals excluded from JobKeeper, an end to job cuts, and calls for green jobs as part of government stimulus spending, covered cars in liquid chalk and posters.

The convoy was backed by unions including the Maritime Union of Australia (MUA), CFMMEU construction division, National Tertiary Education Union and the United Workers Union, as well as the Retail and Fast Food Workers Union.

A group of around 40 cyclists led the convoy off from the Domain. The protest then circled in laps past the NSW Liberal Party offices and the Fair Work Commission. The size of the convoy produced gridlock around the city, with police eventually blocking the road to disperse cars.

But when the first cars made the decision to leave, the end of the convoy was only just reaching the Fair Work Commission.

“Today is May 1, the international day of the working class. It’s fundamental that working class people reject the attacks and the austerity that we are facing with the unfolding of the economic crisis”, Paul McAleer, Maritime Union of Australia (MUA) Sydney branch secretary said.

“It is wrong for workers, who are at the forefront of fighting this virus to face attacks on their wages and conditions and their rights.”

Union organiser Alex Suhle said the UWU was campaigning for the government, “to extend JobKeeper and welfare to all workers, this includes migrant workers and short-term casual workers.”

In addition, “We call on the government to nationalise businesses like Qantas and Virgin and retain their workforce, instead of paying these businesses billions of dollars to sack workers”, he said.

Large numbers of NTEU members also joined the convoy, with university staff facing job cuts and attacks on their wages and conditions due to the government’s failure to address the funding shortfall caused by coronavirus measures.

It was the third convoy protest in Sydney organised by the May 1 movement, which was initially formed before the COVID-19 crisis to organise a major union stopwork rally on 1 May.

There was initial uncertainty about whether the convoy on May 1 would go ahead, after police told organisers it would be illegal, with participants facing fines under coronavirus health orders.

But after Maritime Union of Australia (MUA) officials and May 1 Movement organisers insisted they would continue with the event, police backed down.

There should never have been a question about the convoy being illegal. It was organised ensuing safe social distancing, with people separated off in their own cars or bikes—just as the two previous convoys had been.

As Greens MLC David Shoebridge put it, “This is an essential action confirming the right to remain politically engaged and demand a fairer world in the face of laws that empower police and threaten our right to peacefully demand social change.”

The May 1 movement this year broadened its demands to include social justice and climate action alongside workers’ rights. “We urgently need jobs in renewable energy and other sustainable industries to meet both the unemployment crisis and the growing threat of climate catastrophe,” as Feiyi Zhang of Workers’ for Climate Action put it.

On radio station 2SER, which again broadcast from the convoy, UTS academic and Garrwa and Barunggam man Jason De Santolo argued, “if we’re committed to a move away from fossil fuels towards a more just and sustainable way of living then that just transition has to prioritise Indigenous peoples at the front line of the impact of fossil fuels.

“We’d like to see government supporting the push for jobs on country for Indigenous people working to keep it sustainable, by making wages available.”

The success of the convoy was a boost for the fights workers are now facing, like those against cuts to casuals’ jobs and the threat of wage cuts at universities and other workplaces. We are going to need a fighting union movement to resist these attacks and make sure no worker is left behind.