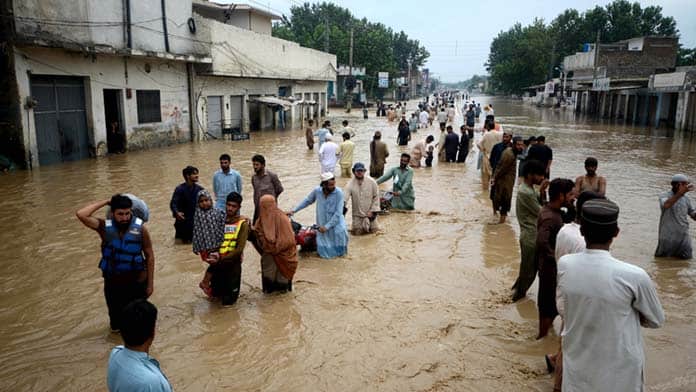 Extreme flooding has devastated Pakistan after ten consecutive weeks of heavy rainfall. Nearly one third of the country is still under water, an area larger than the state of Victoria, with 33 million people affected and at least 1300 dead, according to Pakistan’s National Disaster Management Authority.

More than half a million people are now living in displacement camps and thousands more have lost their homes. Hospitals and infrastructure have been destroyed, leaving tens of thousands of people without access to medical care, clean water and food.

Pakistan’s Climate Change Minister, Sherry Rehman, has called the floods a “climate catastrophe”. According to the United Nations, this year has seen the highest rainfall in Pakistan since records began. Rainfall in August alone was 780 per cent above average.

Climate disasters are multiplying. This year Europe has also seen its worst drought in 500 years, China endured the worst heatwave in human history, and extreme heat in western North America broke over 100 temperature records in a week.

The devastating floods in Pakistan have been caused by the same process of global warming that led to the floods along the east coast of Australia this year. Higher temperatures mean more water in the air: for every degree of warming, the atmosphere can hold 7 per cent more moisture.

The flooding follows a slew of abnormal weather events in Pakistan over the last year. Since last winter, there have been four heatwaves, leading to what locals called a “year without spring” and scorching crops across the country. With large swathes of farmland and silos now under water, a severe food shortage is anticipated.

Adding to the extreme monsoon weather has been the melting of glaciers in the north of the country. Pakistan has the highest number of glaciers outside of the Arctic and Antarctic. According to Ulrich Kamp, Professor of Earth and Environment at the University of Michigan-Dearborn, in the period between 2015-2019, an additional 70 billion tons of ice from Pakistan’s glaciers melted every year, compared to 2000-2004.

There is widespread anger amongst Pakistanis at the government’s slow response to the catastrophe. Maula Bakhsh Mala, a fisherman from Lake Manchar, says, “we are drowning due to administrative negligence”. Some of the poorest and politically repressed regions have been the worst hit, such as Southern Punjab and Balochistan, where an armed insurgency against state repression is ongoing.

Even before the floods, the Pakistani economy was in crisis. In July, inflation stood at 24.9 per cent. The cost of electricity and food has soared.

But responsibility for the devastating floods doesn’t only lie with the Pakistani government. While Pakistan contributes less than 1 per cent of emissions globally, it is one of the ten most vulnerable countries to its impacts. The new fossil fuel projects in Australia that have the support of the Albanese government will only make things worse.

Rich countries have still not delivered the US$100 billion a year in climate finance for the Global South that they agreed to 13 years ago at the Copenhagen summit. A bailout of $1.1 billion from the International Monetary Fund was approved for Pakistan in late August. But in the last year Pakistan has paid around $15 billion in debts to mostly wealthier countries.

To avert more of these catastrophes, the climate movement will need to mobilise in massive numbers for real, drastic action on climate change.