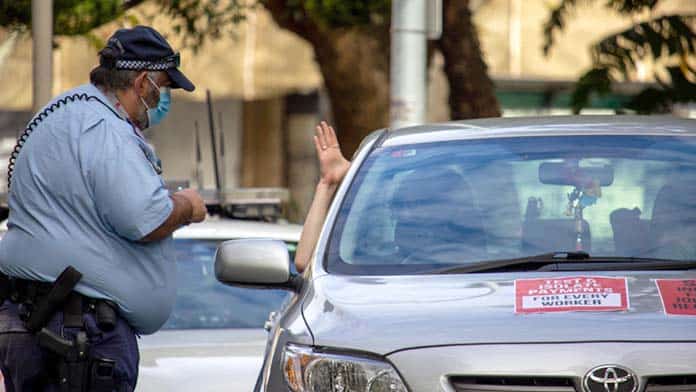 Police have launched a crackdown against a car and bike protest convoy in Sydney today demanding adequate income support payments and improved safety at work.

The convoy of unionists was targeted by police as people drove past the Liberal Party headquarters on William Street.

Nine people were fined a total of $9000 for breaching “stay at home” orders for driving into the city in their cars. Unlike last weekend’s anti-lockdown protest, organisers were careful to ensure it was COVID-safe. Each car held only members of the same household and participants wore masks and remained inside their cars during the convoy. But this was not enough for police, who were determined to stamp out the protest.

The car convoy was initiated by United Workers Union members at the Annette Kellerman aquatic centre, who have been fighting for pandemic pay since they were stood down five weeks ago, at the start of the lockdown. Dom, one of the stood-down workers, was one of those fined.

“Union members and workers from Annette Kellerman have been stood down since June and have only had inadequate income support to rely on. Those on Centrelink are still getting nothing,” he told Solidarity, since they normally worked less than eight hours a week and are therefore ineligible for payments. They, and hundreds of thousands of others in Sydney, are simply forced to live through the lockdown on JobSeeker payments, which leave them below the poverty line.

“We’ve started to do a wider protest about the limited support from the government and about the lack of security for workers getting tested though test and isolate payments,” he said.

The convoy was also supported by the Sydney branch of the Australian Unemployed Workers Union (AUWU) and the USyd Casuals Network. Members of at least ten unions took part.

In a ridiculous show of force, police set up roadblocks along Mrs Macquaries Road to stop the convoy assembling there. They then pulled over anyone driving past the Liberal Party headquarters on William Street who had protest signs on their cars or looked like they were part of the protest.

Dom told Solidarity that, “There were around ten riot squad vans, a huge MDT (Mobile Drug Testing) bus, and scores of police on horses. It was so over the top for 50 cars and bikes planning on driving around the city. It’s consistent with their behaviour of over-policing western Sydney and shows how they’re abusing these new powers they’ve got to silence any criticism of the government’s failings.

“Me and my girlfriend were driving up College Street and were pulled over by a motorcycle cop. He issued us with a move on order and told us to get out of the city.

“We went around Hyde Park to go back towards Bondi which is where I’m living. Highway patrol pulled us over on William Street and proceeded to find both of us $1000 each and wouldn’t listen to us telling him we’d already been issued a move on and were trying to comply. He said we had no valid reason to be in the city.

“We had posters stuck to the car and when they saw those they pulled us over immediately.”

“The car convoy was COVID-19 safe,” one of the organisers of the protest, Cooper Forsyth, said. “The lack of income support for workers and unsafe workplaces where workers are at risk of getting the virus are the real threat to our health. People shouldn’t be forced to travel chasing extra work or assistance from charities while the city is in lockdown.

“Health rules around coronavirus cannot be used to stamp out the right to safe protest.”

Evan Van Zijl, the Sydney Coordinator of the Australian Unemployed Workers Union added: “The Liberals have been playing games with the lives of workers—forcing us to choose between safety and starvation.

“We need social security at $600 per week, disaster payments raised to a liveable level, and a vaccine roll-out for all front-facing workers with better leave for testing and isolation.”

With Scott Morrison and Gladys Berejiklian leaving stood-down workers and those on JobSeeker without enough income to survive during lockdown, we need to keep asserting our right to protest and demand adequate support and safe working conditions for all.