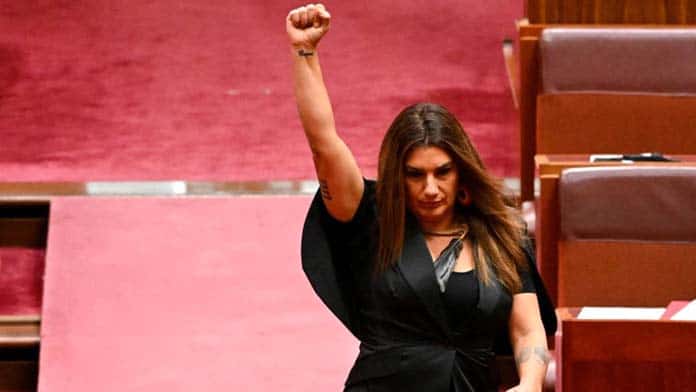 An unholy alliance of Labor and Coalition politicians, media, pro-Voice Aboriginal activists and Greens insiders is trying to drive Djab Wurrung, Gunnai and Gunditjmara woman, Senator Lidia Thorpe, out of the Greens and potentially out of parliament.

It is a crude attempt to punish Thorpe for holding views that grate with the establishment—criticisms of the Voice to Parliament, contempt for the monarchy and everything that smacks of colonialism, and a willingness to call out and fight racism against First Nations people.

She was part of the campaign to save the Djab Warrung sacred trees in western Victoria. She’s been an organiser of the inspirational Invasion Day rallies in Melbourne. And she has also spoken many times at Refugee Action Collective (RAC) protests, calling for freedom for refugees.

She’s being punished for being a loud, fearless Black working class woman who doesn’t play the game of politics in the same way as those who have entered parliament after apprenticeships as lawyers, ministerial staff or even union organisers.

Thorpe is also a handy distraction from many of the real crimes that are blighting the lives of millions: rising rents, soaring food and energy prices, and lengthening waiting lists for medical treatment.

The critics have an additional aim—to force Greens leader Adam Bandt to discipline not just Thorpe but any radical members, to make the party acceptable to the establishment.

That’s why Brisbane Greens councillor Jonathan Sriranganathan has called on the party to stand up to the media blackmail.

“Lidia’s willingness to speak up uncompromisingly against racism and colonisation has made her a lot of enemies, and she is being targeted because of her identity as a Black woman who doesn’t back down or sell out …

“Instead of buckling under the first sign of pressure … the party needs to come out strongly in support of Lidia and the work she’s doing, and stop letting Sky News and the major parties call the shots.”

Thorpe’s most recent “crime” was to have a brief, undeclared relationship with Dean Martin, a former leader of the Rebels motorcycle gang, while she served on the joint parliamentary law enforcement committee, which was receiving confidential briefings about bikie gangs and organised crime.

None of Thorpe’s detractors has presented any proof that she misused her position to help the Rebels. In any case, Martin gave up his leadership role and left the Rebels four years ago. He has no criminal record. Sources who know him well told Solidarity that he has no track record of violence or involvement with drugs.

Many of those baying for Thorpe’s blood over what would be at most a technical failure to declare a relationship had a quite different attitude last year.

The Murdoch media and the Liberal machine went into overdrive to paint her as a victim of the anti-corruption process and a woman duped by the man she loved.

Peter Dutton, then Home Affairs Minister, said: “I don’t think you could find anybody more honourable or decent than Gladys Berejiklian. It’s a time for NSW to get behind her.”

Today, he says Thorpe is unfit to be in parliament.

This from the man whose colleagues in the former government included Christian Porter, linked with rape allegations; Alan Tudge, who conducted an allegedly at times violent affair with a staff member; and Scott Morrison, who lied constantly and effortlessly to the public and even his colleagues.

The Age has been campaigning against Thorpe for many weeks. Headlines have included “Lidia Thorpe is a cyclone making landfall in the Greens” (30 September); “Bandt needs to start difficult conversations with Lidia Thorpe” (3 October); and “Adam Bandt’s Lidia Thorpe problem is not going away” (20 October).

One of the latest shows how desperate they are to smear her.

On 22 October, two days after her brief relationship with Martin had been made public, the headline was “Lidia Thorpe quizzed Home Affairs boss about suspected Rebel bikie”.

The story’s placement was clearly an attempt to create the impression in a casual reader that Thorpe had used her position to advocate for Martin. It was even accompanied by photos of them both.

But The Age story itself blew that theory apart. Thorpe’s questions last year (after her relationship with Martin had ended) were about Jack Hobson, a non-citizen who was in immigration detention facing deportation under section 501 of the Migration Act for failing the “character test”, despite having Indigenous heritage.

She asked Mike Pezzullo, the top public servant in Home Affairs, how many Aboriginal people were in immigration detention and got the shameful answer of 25.

At the time, the Liberals were challenging a High Court decision that Aboriginal people could not be deported. Labor has now dropped that challenge, effectively endorsing Thorpe’s argument and validating the release into the community of people like Hobson.

So, far from this being a shonky case of doing a lover a favour, Thorpe was standing up for the rights of First Nations people. She was absolutely right to do so.

I met Dean Martin while chairing a RAC rally outside the MITA detention centre to highlight the plight of the 501s, the non-citizens awaiting deportation—some for committing crimes, some merely for associating with the wrong people. He rocked up and asked to speak (Thorpe was not present).

He called out the government’s racism in deporting Aboriginal people and spoke from the heart. His brother, Shane, had been deported to New Zealand as a 501, only to die shortly after. (Ironically, the family has been able to bring Shane’s body for burial in Victoria—in death, he beat Australian Border Force.)

Later on, I spoke with Dean in detail and he said he knew he was on borrowed time—that speaking out made it more likely that he himself would be deported as a non-citizen for failing the character test. But he felt he had no choice.

Who here is the real criminal? The bikie with no convictions or the successive governments that have enabled the indefinite detention of refugees and the deportation of non-citizens who have lived most of their lives in Australia?

Lidia Thorpe has been calling out this kind of hypocrisy all her life. She deserves the solidarity of every activist, every anti-racist and every progressive. #StandWithLidia #AssociateWithLidia