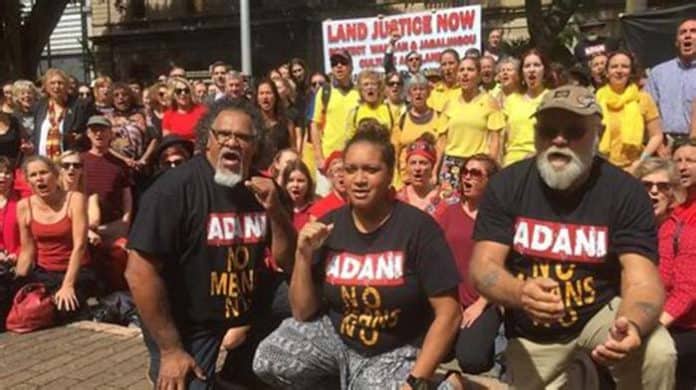 The Mabo case, decided 30 years ago in 1992, saw the High Court recognise Native Title. But while Mabo formally rejected the legal doctrine of “terra nullius” used to justify colonial dispossession, the High Court did not challenge the legitimacy of this dispossession.

In fact it ruled that Aboriginal ownership had been extinguished over the vast majority of the Australian continent—and that Aboriginal people were not entitled to any compensation for this.

Aboriginal activist Gary Foley calls the Mabo decision and the Native Title Act that followed in 1993, “the greatest single act of dispossession since 1788”.

The Mabo decision simply provides the possibility of common law recognition of Aboriginal customary title, in places and circumstances where courts find this title has survived the onslaught of colonisation.

Aboriginal people must prove that they have maintained an ongoing connection to the land by continuing their traditional practices on it. But where the land was stolen and used for any other purpose that stopped traditional practices—whether farming, mining or urban development—native title is considered extinguished.

The lands that have been given back are mostly in very remote areas in Australia, on land unwanted by white settlements and industry. Only a small fraction of the Aboriginal population have any hope of gaining recognition of Native Title.

And even where it is recognised, Native Title does not provide rights to exclusively own or control the land.

Native Title is the weakest form of land tenure in the British common law system. Native Title holders can use land for certain purposes like camping, hunting and fishing. But they have no right to block commercial development. They cannot veto mining developments.

The Gomeroi people have a Native Title claim over areas in northern NSW including the Pilliga forest where mining company Santos plans an 850 well coal-seam gas development, threatening to contaminate the Great Artesian Basin as well as release 127 million tonnes of greenhouse gases. While the Gomeroi have voted against agreeing to the mining development, Santos has simply applied to the Native Title Tribunal to extinguish their Native Title rights. The Tribunal routinely approves mining company applications.

The Native Title Act only stipulates that potential commercial developers must, “negotiate in good faith” with Native Title holders, “with a view to forming an agreement”. There is no requirement to actually enter into an agreement or even to pay mining royalties.

The Yindjibarndi have been fighting Andrew Forrest’s Fortescue Metals Group over mining on Yindjibarndi Native Title lands ever since 2003. Michael Woodley, CEO of the Yindjibarndi Aboriginal Corporation, has said:

“Native Title legislation is really a discriminating process to legitimise the taking of Indigenous people’s land by government and industry… If we don’t do a deal, the company threatens us that they’re going to get the land anyway and we know they will. That puts poor people in a very compromising position.”

Even though they have won in court, they most the Yindjibarndi will receive is compensation, with Fortescue saying the court decision, “has no impact on the current and future operations or mining tenure”.

Protest actions or even media campaigns campaigning to stop the project are seen to be a breach of “good faith”—and can cost Native Title holders a seat at the negotiating table.

The Adani coal mine proposal, for example, split Wangan and Jagalingou traditional owners between those who opposed the mine completely and others who decided to take what they could get from negotiations with the company, knowing they had no legal power to stop the mine going ahead.

One representative who agreed to negotiate with Adani, Craig Dallen, described the message from a meeting with Queensland government officials as, “take the deal or we’ll extinguish Native Title.”

In the face of poverty and government neglect, many Aboriginal communities decide to take whatever job offers and compensation from mining companies is on offer.

The process of claiming Native Title through the courts also places an enormous strain on Aboriginal communities.

Establishing an unbroken, customary connection to land in a hostile court room means putting your identity on trial. This process can cause bitter divisions.

As a detailed report on the Victorian experience by Muriel Bamblett and other Aboriginal leaders says:

“What began with hope soon began to become a tool which fractured our tribes and communities in a way not seen before.

“Siblings, cousins, Uncles, Aunties—families began to be driven apart from each other. In some cases they would not even talk to each other.”

The process of fragmentation and compromise of the “Native Title” era is a far cry from the nation-wide solidarity of the Aboriginal movement in the 1960s-80s that popularised the “land rights” slogan.

That movement demanded large grants of full freehold title to Aboriginal people as compensation for their systematic dispossession. This meant that all Aboriginal people had a stake in land rights—not just those who could prove an “ongoing connection”.

The Mabo ruling has worked to displace the Aboriginal struggle for land from the political arena into the legal one. We need a return to the politics of the original land rights movement if there is going to be any real step forward for Aboriginal rights.