Ukraine war product of imperialism of both Putin and the West 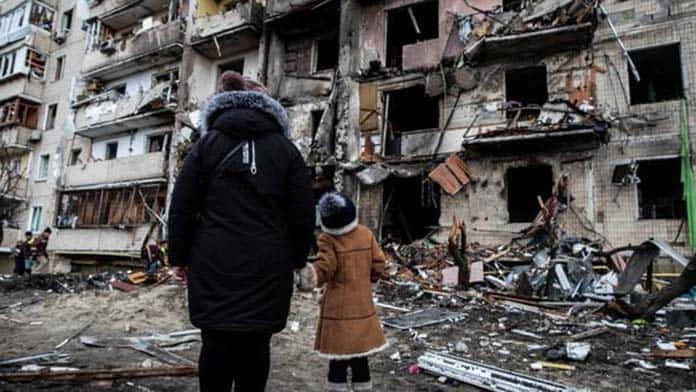 Russia’s invasion of Ukraine is a brutal piece of imperialism. Already hundreds are dead, with rockets fired into civilian areas. Refugees are streaming over the border with at least 500,000 people displaced.

We have to oppose this barbarism and demand that Russia withdraw all its troops and end the war.

Russian President Vladimir Putin has always been a ruthless, violent ruler. Among his first acts after gaining power was a barbaric war against the Chechen independence movement in 1999. Russia’s military onslaught left between 50,000 and 250,000 civilians dead and saw the capital, Grozny, bombed into ruins.

Putin’s aim is to increase the power and wealth of the Russian state through recovering its influence among the former Russian-controlled areas of Eastern Europe and central Asia.

But it is not just Putin playing this imperialist game. The fundamental cause of the war in Ukraine is a clash between two rival imperialisms.

NATO and the US also share the blame for the conflict.

Ukraine has been treated as a pawn, stuck between Russia and the West in a struggle for influence.

Calling for NATO to enforce a no-fly zone, which would mean shooting down Russian planes, or to send troops against Russia and escalate the conflict, would be a disaster. This would drastically expand the slaughter, and mean open war between two nuclear-armed states, Russia and the US.

Western governments, including the US, its NATO allies, and Australia, like to present themselves as the defenders of freedom and democracy around the world. They want us to take their side against authoritarian states like Putin’s Russia or China.

But despite their democratic trappings, the governments of the US and other NATO member states are every bit as imperialist as Putin’s Russia, with the US playing an aggressive role worldwide.

NATO was established as a Cold War alliance against the Soviet Union and its empire in 1949. After the end of the Cold War in 1991, its reason for existence seemed to vanish.

When the Soviet Union collapsed, Russia lost almost half of its population, with 14 republics breaking away along its borders, including Ukraine. This was in addition to the loss of its satellite states in Eastern Europe.

Its economy was left shattered, with economic output falling by 45 per cent. In 1998 there was another crash when Russia defaulted on its debts and the rouble fell by 60 per cent.

But the US pursued a policy that American academic and adviser on Russia Stephen F Cohen described as, “a relentless, winner-take-all exploitation of Russia’s post-1991 weakness”.

The US and NATO took advantage of the situation and attempted to militarily encircle Russia.

Instead of dissolving, NATO was expanded into Eastern Europe, with the establishment of new US military bases right up to Russia’s borders in Lithuania and Estonia. This violated the undertaking given to Russia’s Mikhail Gorbachev in 1990, in return for accepting that a newly reunified Germany would join NATO, that NATO would not expand any further east into former Russian territories.

These efforts could only inflame tensions between Russia and the West and encourage Russia’s military build-up.

In 2008, the US proposed that Georgia and Ukraine join NATO too, although the plan was blocked by Germany and France. But the US was already building up Georgia’s army through arms shipments and Pentagon training. The country sits along Russia’s southern border along the Black Sea.

This led to a war between Russia and Georgia that year, with Putin setting out to send a message to the West and demonstrate Russia’s continued military power.

The US also took a hard line over Ukraine. Biden refused to consider Putin’s demand for a guarantee that it would never join NATO.

NATO is a military alliance designed as a means of pulling the large European states including Britain, Germany and France behind US aims and projecting US military power into Europe.

This has been a key aim of US imperialist policy, spelled out by Zbigniew Brzezinski, a key national security adviser to a series of Democratic US Presidents. In a famous book he called Europe and Asia “the grand chessboard” where the US had to maintain control to ensure its global “preeminence” through preventing any rival state from dominating it.

The European states are still completely reliant on the US militarily, with 70,000 US troops permanently stationed in Europe. When France and Britain began the military intervention against Libya in 2011, they quickly ran out of bombs and had to ask the US to take over.

Despite their claims to support democracy, Britain and France initially joined NATO at the end of the Second World War in an effort to hang on to their colonial empires. NATO declared its full backing for France’s colonial war in the 1950s and 1960s to preserve its rule over Vietnam, Cambodia and Laos.

More recently, NATO was responsible for running the war in Afghanistan for almost two decades, propping up a corrupt puppet government that collapsed the moment foreign troops left.

Both NATO and the US have been happy to support dictatorial regimes where it suited their interests, including in NATO member states such as Portugal, a founding member under authoritarian rule until 1974, and Greece under its military dictatorship from 1967 to 1974.

The US backs up dictatorships worldwide including Egypt, one of the top recipients of US military aid, and the autocratic monarchy of Saudi Arabia, currently waging a brutal war in Yemen with the support of US weapons and military logistics.

It remains the sole superpower, with military spending greater than the next 11 countries combined and about 800 military bases worldwide.

As it showed when it invaded Iraq in 2003, it is willing to wage bloody wars to advance its own wealth and power, in defiance of global rules or international law. At least one million people died and a whole country was left devastated.

Since 1945, “the US has attempted to overthrow more than fifty governments, most of which were democratically elected, and grossly interfered in democratic elections in at least thirty countries”, as author William Blum documented.

Imperialism is an outgrowth of the economic competition built into capitalism and its drive for profit. It is not simply about military power and control of territory. Rival states also compete to secure markets, investment and raw materials to boost their economies and the profits of local companies.

The Western expansion into Eastern Europe is a case in point. Alongside NATO expansion went European and American efforts to dominate Russia’s old sphere of influence economically.

The US imposed a program of neo-liberal “shock therapy” on Russia and Eastern Europe after 1991. The aim was to prise open the economies of former Eastern bloc countries and allow US and European companies to secure new markets and investments. This involved widespread privatisation and cuts to social spending.

Much of Eastern Europe has been incorporated into the EU, with Germany in particular, its leading economic power, taking over new markets, manufacturing plants, and resources.

The history of the 20th century saw this economic competition spilling over into war again and again.

Since the Second World War, the US’s military and economic power has allowed it to write the rules on global trade and investment to its own benefit.

Faced with the challenge from China’s rise as an economic and military power, the US is trying to use all the levers of its military, diplomatic and financial power to maintain its global supremacy.

The US invasion of Iraq was an attempt to use its military power to seize control over oil resources.

The threat of new wars is growing as the world becomes a more unstable place. The decline in US global power has encouraged competitors like Russia and China to become more assertive.

The US’s weakness was on display again last August when it was forced to admit defeat and withdraw troops from Afghanistan after 20 years of war.

Backing the West against Russia or China is no solution. The Australian government has been particularly aggressive in our region, warning that the “drums of war” against China are beating and pouring billions into buying new weapons, including at least $100 billion on nuclear submarines through the AUKUS pact.

Our government is determined to maintain US dominance globally in order to maintain its own clout at a regional level. This will only encourage the regional arms race and feed military aggression, making the outbreak of war more likely.

Military competition and war benefits only the billionaires and the ruling class who control the major corporations. It is always working class people who pay the price through fighting their wars and through sacrifices to wages and living standards at home.

The alternative is to build a mass anti-war movement capable of resisting the drive to war. Mass movements in the past have put an end to wars—from the workers’ revolts inside Germany and Russia that helped end the First World War to the movement against the war in Vietnam.

The brave anti-war demonstrators inside Russia, who have come out onto the streets against the invasion of Ukraine, risking arrest, are showing the way.

Instead of backing one of the major imperialist powers against another, our priority should be opposing our own government’s militarism and warmongering, where we can have the most impact. Our main enemy is at home.