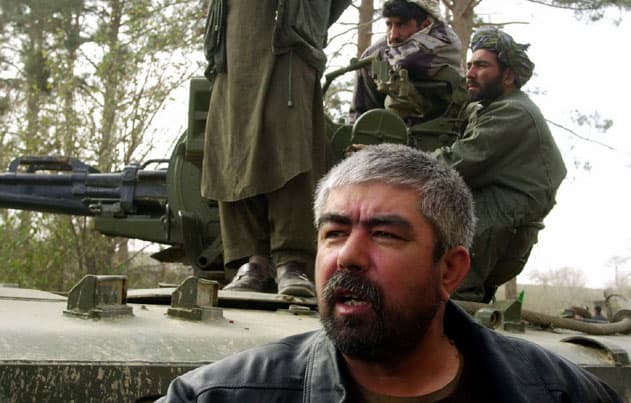 Western politicians have been quick to claim the recent presidential election in Afghanistan as some sort of victory. More than 60 per cent of eligible voters defied Taliban threats and voted in the first round. While western newspapers were full of pictures of Afghan women lining up to vote, behind the democratic veneer is a deeply traumatised society where power depends on the support of rival warlords.

The two leading candidates to emerge from the first round of voting, Ashraf Ghani Ahmadzai and Abdullah Abdullah, both have regional warlords embedded in their respective coalitions.

Ashraf Ghani Ahmadzai’s running mate is the Uzbek warlord Abdul Rashid Dostum. Dostum still maintains a militia and used it in June last year to surround the house of the governor of the remote Jowzjan Province. Dostum was initially aligned with Russia during its occupation but changed sides when he could see which way the wind was blowing.

During the civil war that followed Dostum was accused of looting, rape and summary execution in Kabul. Until his defeat by the Taliban he effectively ran a fiefdom in the north of the country. Dostum is also accused of ordering the massacre of over 2000 prisoners in Kunduz in October 2001. In parliament he was a supporter of the infamous amnesty law that pardoned and gave legal immunity to all individuals accused of war crimes and human rights abuses.

Abdullah Abdullah’s running mates are no better. One is the Hazara warlord Mohammed Mohaqiq who was a commander of a militia that during the civil war deliberately targeted civilians and used rape as a weapon of war. He was one of the main architects of the amnesty law and was a keen supporter of laws that would have legalised rape in marriage.

Of the 11 candidates in the first round, six were severely compromised by their associations with warlords and drug barons. All 11 candidates, too, supported the Bilateral Security Agreement (BSA) with the US. This agreement will allow the US to have ten permanent military bases in Afghanistan and an ongoing force of 10,000 troops. These troops will also have the right to carry out night raids and house searches and will continue to be immune from prosecution.

Signing the BSA is necessary to keep the foreign aid flowing, and its plunder by Afghanistan’s warlord politicians. It is estimated that only 38 per cent of foreign aid ever reaches the ground. The race for the presidency is essentially a race to see who gets their snout into the trough. Fraud and intimidation are part of every election.

Also fueling corruption is the money made from the booming opium trade that the US and other Western powers have turned a blind eye to. According to the UN 2013 Afghanistan Opium Survey, opium production was at an all time high, having increased by 36 per cent in 2013 to 5500 tons. Opium production has increased by more than 40 times since the last year of Taliban rule and Afghanistan produces 90 per cent of the world’s supply. The country rates at number 175 out of 177 countries on Transparency International’s Corruption Perceptions Index.

Tens of thousands of ordinary Afghans have lost their lives during the occupation, but there is very little to show for their suffering. According to the World Affairs Journal, Afghanistan, “has the world’s highest infant mortality rate; 122 of every 1000 children die before they reach age one.

“UNICEF reports that 59 per cent of the nation’s children grow up ‘stunted’ for lack of nutrition during the early years of life…Afghanistan still ranks near the bottom on per capita income, literacy, life expectancy, electricity usage, Internet penetration, and on the World Bank’s broad Human Development Index”.

Much is made of how things have improved for women in Afghanistan. But Amnesty International describes it as “one of the worst places to be a women”. Just 36 per cent of Afghan girls are in school while only 12.6 per cent of women are literate. More females die during pregnancy and childbirth than almost anywhere else in the world.

Eighty seven per cent of women experience domestic violence, yet Afghanistan’s politicians have pushed a bill that makes it almost impossible to get successful prosecutions.

Latifa Ahmady, director of the Organisation for Promoting Afghan Women’s Capabilities, who initially supported the occupation, now says, “they were supposed to bring peace, security and equal rights for women. We have none of these things and that is why they must go.”

The occupation was never about helping ordinary people, but about US power and influence. Those that opposed the war were right to do so. The Western powers are no solution to Afghanistan’s problems.