Imperialism no ally for Kurdish fighters in Kobani 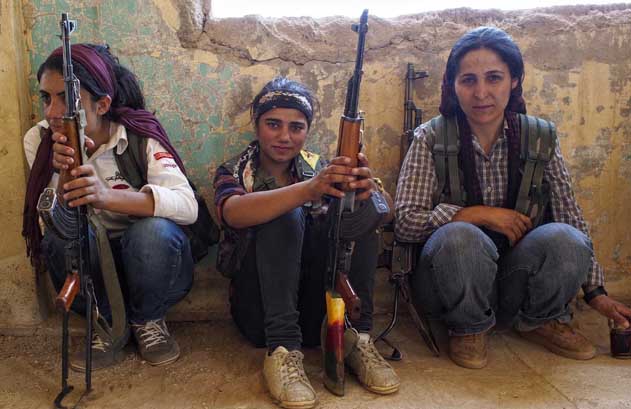 The defence of Kobani against the reactionary and sectarian Islamic State (IS) has inspired many on the left. In some quarters, Kobani itself is being portrayed as part of a revolutionary social experiment in Kurdish Syria.

Kobani, a predominately Kurdish town, has been under self-rule since July 2012 when the Syrian army reached an agreement with the PYD and withdrew, something which enabled Assad to concentrate on the war against the democratic opposition in the major cities.

In January this year, Kobani, along with two other predominately Kurdish regions, Afrin and Jazira, established the autonomous self-governing confederation of Rojava (Western Kurdistan) and established a “social contract that reconciles the rich mosaic of Syria through a transitional phase from dictatorship, civil war and destruction, to a new democratic society where civic life and social justice are preserved”.

The Rojava cities are run by popular assemblies. While there are similarities to the democratic councils that took over Syrian towns in the early stage of the revolt against Assad, in Rojava they were established by agreement between existing Syrian-Kurdish political factions.

Rojava councils are also run on a non-sectarian basis, with Kurds, Arabs and other minorities all entitled to representatives.

But it would be wrong to idealise the situation. The military defence of the area is led by the Democratic Union Party (PYD), an off-shoot of the Turkish based Kurdistan Workers Party (PKK). Its People’s Defence Units also include Arabs and Christians and at least a third of the soldiers are women. But the PKK has a long history of authoritarian nationalism as the leading part of the Kurdish movement in Turkey.

Within Rojava, the Kurdish Youth Movement, which has played an active role in anti-regime protests from the beginning, accuse the PYD of targeting and arresting youth activists.

The Kurds in Rojava also refused to join the struggle against Assad for a long period, attempting to sit on the fence and take advantage of the power vacuum to establish Kurdish control over the area. Earlier this year the Assad regime was still funding non-military state services in the region and has spared Rojava from its bombing campaigns. Assad even promised to give them citizenship to try and keep the Kurds from uniting with the opposition.

But recently, under siege from IS, the Syrian Kurds have established some coordination with the Free Syrian Army and some FSA units have joined the fight to defend Kobani.

Socialists have always supported the struggle of nations for self-determination and the Kurds are no exception; the struggle of oppressed nations weakens imperialism. However, the Russian revolutionary Lenin warned against the dangers of “painting national struggles in communist colours”. It is a mistake to equate national struggles with socialism. The dangers can be seen in Iraqi Kurdistan, for example, where nationalist Kurdish leaders Talabani (until recently President of Iraq) and Barzani are in close collaboration with Turkey and the US.

Turkey, a regional power and NATO ally, is more interested in suppressing its own Kurdish minority than in opposing IS and has systematically prevented fighters and supplies from reaching Kobani.

Turkey has also denounced the Democratic Union Party, the party leading the defence, as “terrorist”. It has now allowed fighters from the Iraqi Kurdistan government to enter Kobani, but still refuses any direct aid to the Syrian Kurds.

There are 30 million Kurds living as minorities in Iraq, Iran, Syria and Turkey. They are the world’s biggest nation without a state and are oppressed in all four countries. This division is a legacy of Western imperialism, which drew the borders after the First World War to suit their colonial interests. While the US has stepped up the bombing of IS forces surrounding Kobani, it has no interest in supporting an independent Rojava that destabilises Turkey. The West doesn’t care about the plight of the Kurds and has historically manipulated their struggles to suit their own interests.

In the 1980s, the West ignored the use of chemical weapons by Iraqi dictator Saddam Hussein against the Iraqi Kurds. Then in 1990, when the West wanted to attack Iraq, suddenly Hussein was condemned for “gassing his own people”.

Turkey currently holds 8000 Kurdish political prisoners accused of terrorism and the West says nothing. Australia and the US have proscribed the PKK as a “terrorist organisation” at the behest of Turkey.

The real allies of the Kurds in Rojava are not Turkey or the West. The fight to extend democracy will depend on linking their struggle with that of ordinary Kurds in Turkey and Kurdish Iraq, as with the democratic opposition in Syria fighting against dictatorship and for a better world.