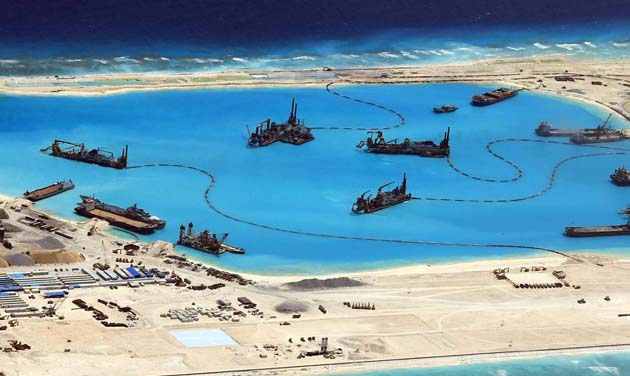 China’s land reclamation in the South China Sea has led to an escalating stand off with the US.

China has been singled out by the West for this new “aggressive” stance.

However, all claimants to territory in the South China Sea (Vietnam, The Philippines, Malaysia, Taiwan and Brunei) have engaged in construction on features they control, including island building, in order to further their claims.

The US says China’s actions are a threat to freedom of navigation. But China has made no threat to commercial shipping, opposing only military operations through territory it controls.

China wants to stop foreign military aircraft or navies entering the exclusive zones surrounding its islands without permission. Given the number of islands China claims this would exclude the US from most of the South China Sea.

US Defence Secretary Ashton Carter responded unequivocally by saying: “The United States will fly, sail and operate wherever international law allows, as we do all around the world.” Further, “We will remain the principal security power in Asia for decades to come.” This means the US insists on its right to operate within 20 kilometres of China’s coast.

Australia has contributed to the belligerence, issuing similar demands that China stop land reclamation and threatening to fly military aircraft over what China claims is its airspace.

Legal possession of an island accords countries a 200 nautical mile Exclusive Economic Zone and rights to the island’s continental shelf.

China, arriving late on the scene as a claimant in the South China Sea, possesses many features in the Spratly Islands that are only submerged rocks or reefs, whereas its rivals have already occupied most of the islands. Hence China has been artificially building its claims into islands through land reclamation with the aim of changing their legal status.

China has been stationing military assets on its artificial islands and built an airstrip, which would enable Chinese aircraft to more easily patrol and dominate the area.

This has fuelled the arms race in the region, with defence spending doubling over the past decade in China, Taiwan, Japan, South Korea and India.

Trade and the rise of China

Half of world trade passes through the South China Sea, which links the Pacific and Indian Oceans. It contains rich reserves of oil and gas as well as fishing grounds.

China is reliant on the shipping routes through it for about 90 per cent of its trade. And so are key American allies like Japan.

Since the Second World War the security of these sea lanes has been underwritten by the US Navy.

The rise of China is producing growing imperialist tensions as it comes up against this arrangement.

The growing scale of Chinese investments and trade across the world has led it to develop an expanded military presence to secure them.

China’s “string of pearls” strategy has seen it attempt to secure energy supply routes from the Middle East by concentrating aid and investments along the Indian Ocean coastline.

It is pushing back against encirclement by the US and its allies. US defence spending continues to dwarf China’s by four to one. In a defence white paper released in May the Chinese government outlined a greater global role for its military and an expansion of its naval operations to become a “maritime power.”

Until recently the Chinese navy has limited its operations to its own coastline. But its aim is to develop a blue-water navy capable of projecting influence along the so-called First Island Chain (incorporating most of the South China Sea, north towards Japan), and ultimately into the area demarcated by the Second Island Chain (PNG-Guam-Saipan-Ogasawara Islands). China acquired its first aircraft carrier in 2012.

US pivot to Asia

Despite the chaos in Ukraine and the Middle East the United States’ main region of interest is now the Asia-Pacific. Obama’s “pivot to Asia” involves concentrating 60 per cent of US military assets in the region to contain China.

In addition to its traditional allies which border China like Japan, The Philippines and South Korea the United States has been forging closer ties with China’s other rivals like Vietnam.

The easing of sanctions as the US embraces Burma is particularly worrying for China as it has just opened an oil and gas pipeline through Burma that bypasses the chokepoint of the Malacca Straits and South China Sea. This project is key to enhancing Chinese energy security by avoiding the sea lanes controlled by the US navy.

Crisis and conflict won’t be averted through “dialogue” between the US and Chinese militaries. Geopolitical conflict is built into a system based on competition. Only by weakening imperialism—including Australia’s own militarism—can the growing tensions be prevented from spiralling into war.