US bombs won’t help the Kurds 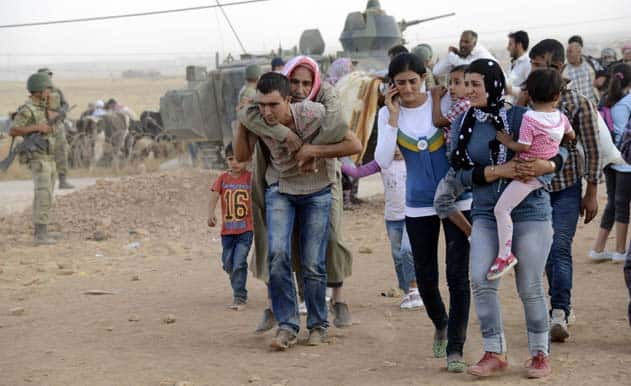 The relentless advance of the Islamic State (IS) on the Kurdish city of Kobane has drawn international attention to the plight of the Kurds, caught between IS, on the one hand, and Turkey on the other.

The Kurds are the world’s largest stateless people. Between 40 and 50 million Kurds are spread across Turkey, Iraq, Syria and Iran. The largest group, around 15 million, lives in Turkey where they have long been oppressed and where the PKK has waged an armed struggle for self-determination since 1984, with a formal ceasefire since 2013. Socialists support their struggle for self-determination.

Many people were shocked to hear US Secretary of State, John Kerry, declare that Kobane “was not a strategic priority” for the US, even though there are warnings of a pending massacre.

The US may have drawn 60 countries into its alliance against IS, but each of them has their own imperialist and sub-imperialist agendas.

There is good evidence that at least two of them, Qatar and Turkey, are still giving support to the IS, and other Islamist movements in Syria. Support has certainly also flowed from Saudi Arabia to IS in the past. Turkey is far more interested in removing its regional rival, Assad in Syria, than it is in opposing IS.

Turkey has troops and tanks massed on the border with Syria, but they have been used against Kurdish protesters and to prevent Kurds crossing the border to assist Kobane.

Turkey’s bombing of PKK bases has dramatically shown that its primary concern is to defeat its own Kurdish insurgency.

While there have long been aspirations for an independent Kurdistan, Kurdish leaders in the different countries where they live have often put sectional interests ahead of Kurdish unity.

The five million Kurds in Iraq have had effective autonomy since the Gulf War in 1991, consolidated after the 2003 US-led invasion of Iraq. Nationalist leaders Talabani and Barzani have long presided over corrupt regimes relying on Turkey as an outlet for their oil exports. Turkey is now the largest foreign investor in Iraqi Kurdistan.

The Iraqi-Kurdish leaders’ reliance on Turkey (and the US) means they have no interest in supporting the PKK’s fight for independence from Turkey.

Iraqi Kurdistan is also strategically important to US interests in Iraq and the region. It was IS’s offensive against Kurdish Iraq in June, taking over Mosul and advancing on Erbil, that precipitated US and Western intervention against IS.

The Kurdish nationalist leadership took the opportunity to extend its territory and seize previously disputed areas such as Kirkuk. Barzani has talked of a independence referendum “within months”, but Barzani and Talabani are too tied to Turkey and the US for this to mean any threat to their interests.

At least 35 Kurds have been killed by the Turkish government as it suppressed demonstrations against Turkey’s inaction in Kobane.

Unfortunately, some Kurdish nationalists and sections of the Kurdish communities in Australia have responded to the desperate plight of Kobane by calling on the US and the Australian government to increase the bombing of IS. Increasing the hand of imperialism will solve nothing for the survival of Kobane or the Kurds. The US is unwilling to support the Kurds in Syria because it sees its alliance with Turkey as more important.

Any real assistance for Kobane will require strengthening the democratic forces in Syria and a political struggle against the Turkish state and its imperialist allies. Hope for the region lies in the strength of self-organisation and solidarity among oppressed groups and the working class.

In Turkey, the Kurds will have to link their fight for self-determination with the fight against Prime Minister Erdogan and against imperialist intervention in general. Erdogan is holding up to 10,000 Kurdish political prisoners—they should be released.

Demands to open the border to Kurds who want to fight in Kobane need to be linked to the struggle for Kurdish freedom. The Kurds have a right to get arms from wherever they can to defend Kobane and further the fight for Kurdish self-determination.

A genuine struggle for independence would also need to call on Iraqi Kurds to fight their leaders’ collaboration with Turkey and the US, and for unity across all religious, sectarian and national divisions. In Turkey, US, Britain and Australia, the real enemy is imperialism and our own ruling class.