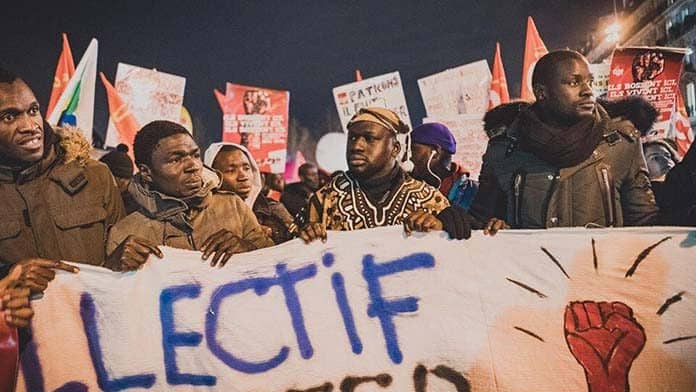 Jad Bouharoun is a Middle Eastern socialist based in Paris. He has been part of the wave of Yellow Vests protests as well as campaigns against Islamophobia and the fascist National Front, now known as Rassemblement National.

Jad will visit Australia in April to speak at the Keep Left conference happening over Easter. He spoke to Solidarity about the fight against racism and the far right in France

Recently French sportswear company Decathlon was attacked for selling a sports hijab, can you explain what happened?

It’s an example of collective hysteria about the hijab in France. Decathlon didn’t really advertise it you just had the option of buying it online. This was picked up by far right activists on social media, masquerading as defenders of secularism, and then you had even government ministers condemning Decathlon for selling it. And it ends up making headline news in the mainstream media.

We had the same thing a year and a half ago when a student union rep was interviewed during a student strike movement, and she happened to be wearing a hijab. It started a very similar online witch-hunt which ended up making headline news.

France is really at the vanguard of Islamophobia. In 2004 young women were banned from wearing the hijab in public high schools. The left reacted very badly to this, and since then Islamophobia has become the dominant form of institutional racism in France.

France has one of the largest far right parties in Europe, are they benefiting from this racist atmosphere?

Marine Le Pen said in 2017 that ‘whatever happens, we have already won the ideological battle’. There is a hint of truth in that.

For the last 15 years Islamophobia has not only been terrible for Muslims and Muslim women themselves but it’s also legitimised the National Front. Before this the National Front was considered even by mainstream right-wing parties to be quite outside the democratic political game.

In 2002 Jacques Chirac got to the second round of the presidential election alongside [then National Front leader] Jean-Marie Le Pen. Usually there is a TV debate between the two candidates, but he refused because he did not want to legitimise their ideas.

In 2017 Macron did debate Marine Le Pen. Marine Le Pen uses Islamophobia as the new kind of legitimate racism to legitimate her party. They moved from the crude anti-Semitism and biological racism to this new form of cultural racism.

Islamophobia is what has allowed it to enter the mainstream.

Do they remain a fascist party?

Fascist parties, like any political formation, can change in shape depending on the political situation. This is especially true when an immediate bid for power is out of the question for objective reasons.

Islamophobia is the main way they have got electoral and ideological legitimacy—and ten and a half million votes in the presidential election in 2017.

Ever since the National Front was founded in 1971 the idea was that it would be a coalition of small openly fascist parties that would seek wider electoral legitimacy. In the last ten or 15 years when Islamophobia began to become its legitimising ideology we have had a dual party.

There is a fascist core, the traditional core of the National Front, and at the same time they are trying to get larger. The tension between the fascists inside the party and the rest of it still exists, which is why Marine Le Pen every once in a while has to make a public reminder of the National Front’s anti-Semitism to reinforce the fascist core.

In 2017 for instance during the election she stepped down officially from her position as head of the party, because allegedly she wanted talk to all the French people. But she nominated a very famous Holocaust denier [to replace her]. This wasn’t just a blunder. She also denied that the French state had any role in persecuting and deporting French Jews during the German occupation. Tens of thousands of French Jews were rounded up by the French police and sent to Nazi death camps.

There are other indications that this is still a fascist party. In the past two years they won something like 1400 councillors elected on National Front lists, 400 or 500 of them have resigned since, saying that they didn’t sign up for the Nazi movement inside the party. And finally we have to understand the links between the National Front and the small neo-Nazi street groups that we have in France. Those links happen mainly through the National Front’s security service, which is made up of 2000 men and most of them are ex-military. Those links were exposed very clearly by an undercover documentary by Al Jazeera English a few months ago. This is why many of us on the Marxist left still think that this is a fascist party.

What is the state of the anti-racist movement?

It’s been an uphill struggle to get even the left to recognise Islamophobia as a form of racism.

This is getting a lot better, partly for generational reasons. It’s become obvious in the last period how often racism is used as a tool by France’s rulers in order to divide us.

In addition to various radical left political organisations, the anti-racist movement in France has two principal components. The first is undocumented migrants who are self-organising, especially those from sub-Saharan Africa. The second is the movement against police violence. The main problem is to get the radical left to recognise we really have to organise and fight on this issue as a political priority.

What is planned for 16 March protest? Why is the issue of police violence so prominent in this and how has this been received within the yellow vests movement?

We think the anti-racist protest will be quite big but it is also a big day for the Yellow Vests because it is the end of Macron’s three month “national debate” [held in response to the protests]. So they are going to Paris to celebrate.

We think the anti-racist protest will be bigger than last year and the year before. One of the things that we’re building on is a protest in December specifically for undocumented migrants. This had 10,000 people on it in Paris alone, including trade unions.

Working class neighbourhoods with high proportions of immigrants from sub-Saharan Africa or North Africa have been organising against racism through the families of victims of police violence.

The level of police violence the Yellow Vests were confronted with has created a favourable terrain for the anti-racist movement and the Yellow Vests to meet. In December high school students came out for their own demands against neo-liberal reforms that seek to restrict access to university. They were severely repressed, especially in black and Arab neighbourhoods.

In one particular neighbourhood, about 100 high school students were rounded up by the cops and made to kneel for three hours. This was days before a Yellow Vests protest in Paris, where you saw a predominantly white working class protest kneeling in solidarity with Arab and black students.

The families of victims of police violence also joined the Yellow Vests protests in December, because they said, these are working class protests against poverty, unemployment, and the lack of public services and we in the immigrant neighbourhoods have known all this for 30 or 40 years.

Keep Left is a three day conference of socialist ideas being held in Sydney from Friday 19 to Sunday 21 April. For more info see the conference website here or book your ticket here

Flemington residents stand up to racism and police violence

A fantastic 250-strong crowd, including 60 local residents, faced down police threats to rally against racism and police violence at the Flemington public housing estate in Melbourne on Sunday.