Behind the election win, Labor is in deep decline 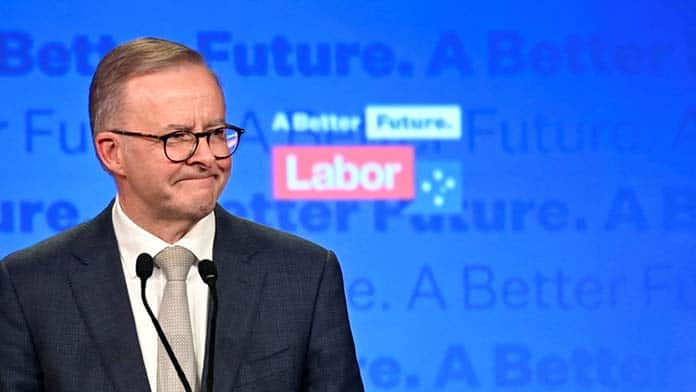 On election night, Labor’s Tanya Plibersek declared: “A win is a win is a win.” But the ALP’s victory could not disguise the fact that the party received its lowest first-preference vote since 1934, at just 32.58 per cent.

In the elections of 1931 and 1934, workers punished Labor under James Scullin for cutting wages and the dole while in office after the 1929 Wall Street Crash.

But if the votes of the 1930s Labor split led by Jack Lang are included in the ALP column, Albanese’s vote share today was worse—the worst since 1903, when Labor was still a new party.

When the 1930s Depression began to lift, the ALP’s vote rebounded. But modern Labor’s vote has been in steady overall decline for 40 years.

In 1951, almost 98 per cent of votes went to the two major parties. In May, the vote for minor parties and independents reached a record 33.68 per cent.

So why is Labor’s vote falling? Some commentators argue that it reflects a permanent decline in Labor’s voting base, with people becoming better off.

But while the biggest swings against the Coalition were in wealthy seats, these were mostly won by teal independents and Greens, not Labor.

Given falling real wages, eye-watering petrol and food prices and rising mortgage repayments, why didn’t Labor get a bigger vote?

The answer lies in the fact that Labor has presided over attacks on working class living standards since 1983, when Bob Hawke stormed to victory with almost half of all first-preference votes.

Hawke and his successor as Prime Minister, Paul Keating, embraced a new phase in capitalism that we now call neoliberalism.

In Australia, the attack took the form of the Prices and Incomes Accord with the union movement. Committed to the deal, unions leaders stood by while real wages fell and Labor smashed the militant Builders Labourers Federation and the pilots’ union.

The Accord put a brake on strikes. Union membership fell as manufacturing declined and utilities were privatised, leading to job losses.

In the 1970s, white-collar workers like teachers had adopted militant tactics and built union numbers. But from the 1980s onwards, new groups of workers in IT, retail and hospitality weren’t inspired to join unions that didn’t fight.

The fall in industrial action and union membership chopped away at Labor’s organised base.

Labor’s attacks paved the way for 11 years of Liberal rule under John Howard.

The Labor governments that followed, led by Kevin Rudd and Julia Gillard, did not reverse the damage.

The share of national production going to workers is now at the lowest level since 1959.

But the experience of 40 years of Labor means that workers’ trust that an ALP government will improve their lives has been sharply eroded.

That’s what lies behind the sharp swings away from the ALP in safe seats. It is not that workers have become more affluent and shifted to the Liberals—it’s that they’re worse off but cynical about Labor’s ability to bring change.

In Victoria, this was compounded by disgust at state Labor’s authoritarian pandemic response, leading to swings against the ALP such as 14 per cent in Scullin and 10 per cent in Holt.

Does all this mean Labor is condemned to just dwindle away like equivalent social democratic parties in France and Greece, which have been reduced to rumps?

It’s unlikely. The ALP still has a solid base among union officials and their bureaucratic machines that provides it with a safety net of funding and activists.

Labor will survive—but is unlikely to ever command the support of a majority of workers again. Meanwhile, if workers want to improve their living standards, it will need a fighting response of strikes and protests.