Labor ditches efforts at change in empty bid for power 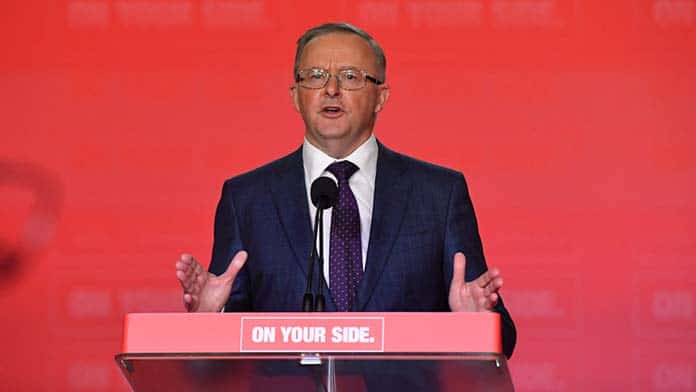 Labor has dumped their opposition to tax cuts for the rich and their policies to limit tax handouts for wealthy property investors, as the party tries to narrow their differences with the Liberals for the next election.

Labor’s 2019 federal election campaign review concluded that they took too many policies to the last election. But their real failure was explaining how their policies were designed to tax the rich to pay for the $100 billion in much needed public spending.

“Over eight long years in government, the Coalition’s record is clear in the lives of everyday Australians: stagnant wages, insecure jobs, increased costs for health care and childcare, longer waits to see a GP and a trillion dollars in debt”, said Labor leader Anthony Albanese.

But Labor will go to the next election with a small target strategy that offers no hope for ordinary Australians.

Terrified of another election fear campaign, Labor is hoping to capitalise on Morrison’s poor polling without offering any real policies.

Labor has dropped their opposition to the Coalition’s stage three tax cuts, which will cost an estimated $137 billion from 2024 over six years.

“It is surreal that in the middle of mass lockdowns, when those affected have to feed and house themselves on little more than unemployment payments of $44 a day, we see the ALP join the federal government to lock in the largest tax cut package the country has seen”, Cassandra Goldie, CEO of the Australian Council of Social Service (ACOSS) told The Saturday Paper.

The changes would see 95 per cent of workers paying the same tax rate at 30 cents in the dollar. This would mean low-income workers earning $45,000 a year are in the same tax bracket as those earning up to $200,000 a year. Even former Reserve Bank governor Bernie Fraser has called the tax cuts “unfair”.

People on high incomes will pocket an extra $9000 a year, while those on the median income of $60,000 will get just $275 in tax cuts. Modelling from the Parliamentary Budget Office shows that the tax cuts will give 58 per cent of savings to the top 20 per cent of income earners, while just 0.1 per cent of savings will go to the poor. And according to a report from the ACOSS, 70 per cent of the tax cut benefits would go to men.

Having already axed their policy to scrap franking credit refunds for people who paid no tax, Labor has also abandoned their plans to change negative gearing and halve the 50 per cent capital gains tax deduction.

The policies would have reduced tax handouts for wealthy landlords and reduced demand and incentives for property investors.

Negative gearing means property investors can offset the cost of owning property against their taxable income if the loan costs are more than their rental income. According to research from the Australia Institute, negative gearing mostly benefits high-income middle aged men.

Since negative gearing was introduced in 1998 under Howard, the cost of housing has skyrocketed, making buying a house unaffordable for most young people. In the last year alone, property prices have risen 16 per cent nationally.

Some Labor members are rightly angry about the policy backflip, with MPs receiving criticism on social media and angry phone calls to their electorate offices.

Emma Dawson, Executive Director of think tank Per Capita, even withdrew from the Labor preselection for the seat of Melbourne over the decision to support tax cuts for the wealthy.

If Labor wants to win votes, they need to give people a reason to vote for them.

A lot can change between now and May, the latest the next federal election can be, as vaccination rates rise and lockdowns lift across the country. Labor’s election strategy can’t rely on criticising Morrison over his handling of the COVID crisis.

Instead of supporting tax cuts for the rich, Labor should go to the election with policies that could make a real difference in ordinary people’s lives.

We need to tax the rich and make them pay for publicly-funded renewable energy, a liveable Jobseeker rate and public health services.