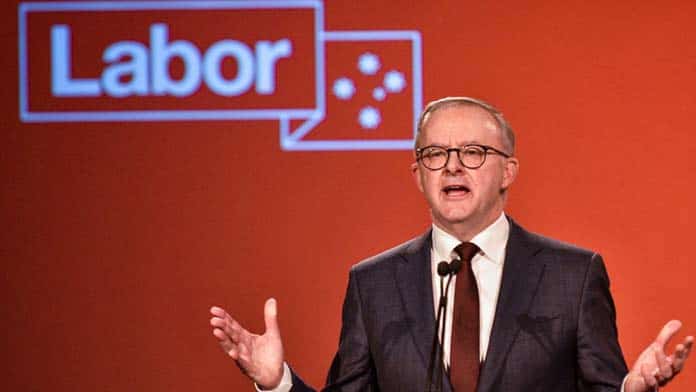 Lachlan Marshall explains how Labor’s small target strategy could backfire, and why we need more struggle to get anything from Labor and win change

In February the Australian Financial Review called the federal election campaign the “Battle of the Boring”.

Labor under Anthony Albanese is trying to minimise its differences with the Coalition, with only a few exceptions like Labor’s commitment to give permanent protection to refugees on temporary visas.

The problem with this “small target” strategy is that it gives voters very little reason to vote for Labor apart from wanting to see the back of Morrison.

Labor could attack Morrison in the areas he is weakest on, defending the LGBTI+ community by opposing the Religious Discrimination Bill, supporting union demands for a 25 per cent increase to the wages of aged care workers, or pledging serious action on climate change and guaranteeing well-paid and secure alternative jobs for fossil fuel workers.

Instead, Albanese has only minor quibbles with the government over these major issues, offering Morrison a lifeline. Labor supported minor amendments to the Religious Discrimination Bill before it was ultimately sunk by five Liberals crossing the floor of parliament.

Labor has dumped some of the progressive policies it took to the last election in response to Bill Shorten’s defeat. Albanese is desperate to show the capitalist class, and what Labor believes to be a conservative electorate, that it can be trusted as the alternative government.

Although Morrison is looking vulnerable there is no guarantee this will lead to election victory for Labor. Unless Albanese can convince workers that their lives will improve under a Labor government, there is a risk that voters will simply choose the status quo candidate rather than the imitation.

This was shown most starkly in the 2001 election. Labor under Kim Beazley thought it could cruise to victory on the back of hatred of the Liberals’ privatisation of public services and introduction of the GST, despite agreeing with large amounts of what the Liberals stood for.

Beazley supported the Liberals’ free market policies loathed by workers. In his budget reply speech in 2000 Beazley stated, “We all now largely agree on … the need for fiscal discipline, an independent monetary policy, deregulation of financial markets, the floating of the dollar, low inflation and a more open economy.”

The policies Labor took to the 2001 election didn’t even begin to undo the damage done to public services like health and education. Beazley committed to retaining the Howard government’s enormous subsidies for private health insurance and private schools.

Labor was leading in the polls until the Tampa crisis, the September 11 terrorist attacks and the invasion of Afghanistan totally changed the key political issues. Labor responded to these events by supporting John Howard lock, stock and barrel.

From 1999 racism against refugees became a defining feature of the Howard government.

In August 2001 a ship called the Tampa rescued a boatload of stranded refugees and planned to take them to the nearest port, Christmas Island. Howard sent the SAS to hijack the Tampa and stop its desperate passengers from reaching safety and urgent medical attention in Australia.

Beazley backed Howard so that Labor could not be accused of being soft on border protection. Shadow Immigration minister Con Sciacca said Labor was “as tough as, if not tougher than, the government when it comes to illegal immigrants”.

Following the September 11 attacks on the Twin Towers, Beazley joined Howard in uncritically defending the United States and its foreign policy, not daring to explain the attacks as a response to US support for Middle Eastern dictators, Israel’s oppression of Palestinians or the first war in Iraq.

Beazley described his position as “clear-cut support for Tony Blair and for George Bush and the struggle against terrorism”. When Australia sent troops to invade Afghanistan in October, Beazley announced that he stood “shoulder to shoulder” with Howard.

Labor was trounced at the elections in November, scoring its lowest primary vote since the 1930s.

Labor’s bipartisanship with the Liberals meant that Pauline Hanson’s One Nation won some workers’ votes , while on the left the Greens achieved an electoral breakthrough, winning over voters who were disgusted with Labor’s capitulations on refugees and war.

A counter-example is the popularity of the British Labour Party during the leadership of Jeremy Corbyn.

In the UK the Labour Party had gone through a similar period of convergence with Tory policies, starting with Tony Blair. Disgust at Blair’s invasion of Iraq and embrace of “Third Way” neoliberalism led to a haemorrhaging of Labour members and votes.

But Labour’s long electoral decline was temporarily reversed when Corbyn, a self-declared socialist and anti-war activist, became party leader. Hundreds of thousands of new members joined and at the 2017 election Labour won a 9.5 per cent swing, pushing Theresa May’s Tories into minority government.

Far from being a “small target”, Corbyn campaigned on policies that offered an alternative to working class people, like increasing the minimum wage, renationalising the railways, building half a million new council houses and free university tuition. He pledged to pay for this by taxing corporations and the rich.

Crucially, Corbyn didn’t just have good policies on paper. He organised rallies that attracted tens of thousands of supporters, helping to create an insurgent mood and a sense that his policies could be won.

Corbyn was subsequently undermined by a media onslaught and internal attacks from right-wing Labour MPs, but the 2017 UK elections showed that left-wing ideas can be popular.

Labor’s small target politics reflect its focus on winning elections at any cost in order to get in to government, at the expense of the broader aim of changing society.

As a reformist party Labor does not seek to overthrow capitalism but aims to reform the system by running the state. This means Labor accepts the need to appease employers so they keep investing and sustain economic growth.

Their commitment to managing capitalism has seen Labor impose savage cuts to wages and public services in response to recession, in order to bail out business and restore their profits. In the 1930s Depression, instead of protecting workers the Scullin Labor government imposed huge cuts to wages, pensions and jobs through a 20 per cent cut in government spending.

The 1980s Hawke and Keating Labor governments imposed wage cuts through the Accords, along with privatisation and deregulation, with the aim of increasing profit levels.

Without significant pressure from below, through protests and strikes, Labor prioritises the needs of business.

For example, Albanese defended Labor’s new climate policy by saying it is “what business wants”, even though it is even less ambitious than what the Business Council of Australia wants. The anti-strike laws that shackle unions and keep wages low haven’t even rated a mention in this election.

Even under left-wing leadership Labor parties prioritise elections to parliament and the needs of business. At the 2019 UK election, on the defensive against the right within his own party, Corbyn ran a more conventional campaign than in 2017, aiming to prove that Labour was responsible enough to take government.

Corbyn caved to pressure from the Labour right and business to commit to a second referendum on Brexit. This allowed Boris Johnson to appeal to Brexit-supporting Labour voters with his clear message that he would “get Brexit done”. The result was a landslide majority for the Conservatives.

To gain as many votes as possible, Labor parties try to appeal to all sections of society, including the most conservative. This explains why Labor didn’t oppose Morrison’s Religious Discrimination Bill, out of fear that it would alienate the minority of homophobic and transphobic voters.

Even if Labor wins, a small target approach guarantees a conservative Labor government.

Albanese told business leaders he would adopt policies inspired by Hawke and Keating. He also quoted approvingly a line by John Howard on the need for relentless economic reform. All three prime ministers attacked unions and set Australia on a path to greater inequality and insecurity for workers.

Labor will respond to pressure to go further by saying it has no electoral mandate for change, insisting that people lower their expectations.

Labor could stand on principle and try to win over more conservative workers through linking the need for change on issues like refugees and climate action to policies that appeal to their class interests, through boosting jobs, wages and services.

But in the absence of insurgent union struggles and social movements, Labor’s electoralism, that sees it chasing conservative votes, and its desire to manage capitalism pulls Labor to the right.
Labor’s small target is the result of it not being under enough pressure from below. This has been worsened by left support for lockdowns, which led most unions and social movements to put strikes and protests on hold for almost two years.

Ultimately it is the balance of class forces and the level of struggle outside parliament that determines whether there is any real change.

The massive anti-war protests in 2003, followed by the Your Rights At Work strikes and rallies against WorkChoices, put the Liberals on the back foot and showed that they could be fought. The refugee campaign pushed back Howard’s racism.

These struggles helped create the conditions for Labor to win a majority and Howard to lose his own seat in the 2007 election. Kevin Rudd wasn’t pushed hard enough to fully reverse the damage done by Howard and his anti-union laws. But it shows the difference that struggle makes.

We need more struggles in workplaces and on the streets to kick out Morrison. But whoever wins the election we need to ramp up the campaigns for climate action, refugees, workers’ rights, and against war.

ABOUT US
Solidarity is a socialist group with branches across Australia. We are opposed to the madness of capitalism, which is plunging us into global recession and misery at the same time as wrecking the planet’s future. We are taking the first steps towards building an organisation that can help lead the fight for an alternative system based on mass democratic planning, in the interests of human need not profit. Read more about Solidarity here or check out details of our meetings and events here.
Contact us: solid[email protected]
FOLLOW US
Thanks for signing up.