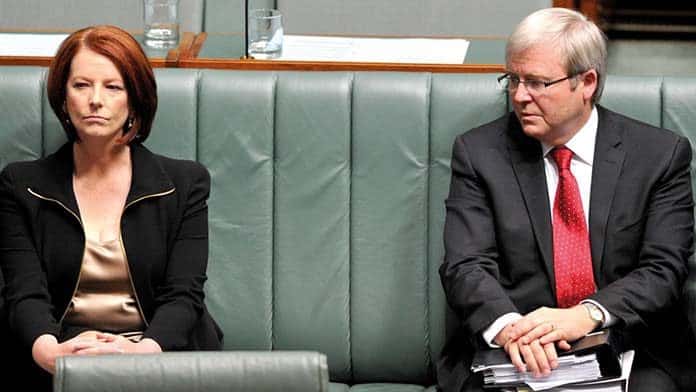 All the polls point to an election victory for Bill Shorten. But Labor have romped home before only to bitterly disappoint later.

In 2007 Kevin Rudd won office on a massive 5.44 per cent swing picking up 23 new seats—even unseating John Howard in Bennelong. On the back of Rudd’s ratification of the Kyoto Protocol and apology to the Stolen Generations, his approval rating soared to 70 per cent. The Liberals were in complete disarray and in opposition in every state and territory.

But it all ended in tears. In 2010, Labor—now led by Julia Gillard—only just managed to hang onto power by forming a minority government with The Greens and some independents. Then in 2013—with Kevin Rudd now back in the leadership—Labor was crushed by Tony Abbott, achieving their lowest primary vote since the 1930s.

How could Labor squander all this support? Labor’s problems stem from their commitment to managing capitalism. When capitalism is booming moderate reforms for workers can be delivered while corporations keep their profits up, but in times of stagnating growth, managing capitalism “responsibly” means attacking workers.

Rudd and Gillard continually delivered policies tailored to the needs of big business. Even when the Global Financial Crisis struck in 2008, Rudd stimulated the economy and took the budget into deficit as he talked about “saving capitalism from itself.” Mostly Rudd was concerned to save capitalism. The Treasurer, Wayne Swan, as early as 2010 was back to promising Labor would deliver budget surpluses.

Instead of redistributing wealth in order to raise workers’ living standards they focused on restoring profits. And pursuing budget surpluses meant making cuts to services including welfare spending and education.

Rudd and Gillard could not deliver genuine reform and the longer they were in office the more the gap between their rhetoric and the reality was exposed. Inevitably, this meant disillusioning Labor’s own working class supporters.

Not just an echo

When Kevin Rudd replaced Kim Beazley as leader in 2007 he seemed like breath of fresh air. Beazley had been a minister in the Hawke and Keating governments and was very much associated with their pro-market economic reforms.

Rudd promised to be an “alternative, not just an echo”. He talked about “fresh ideas”; a “technological revolution”, an “education revolution”, and “an economy for the 21st century” while criticising Howard’s “free market fundamentalism”.

Rudd gave expression to the many grievances with Howard. He described climate change as “the moral question for our time” and promised to ratify the Kyoto protocol. Whereas Beazley had failed to stand up to Howard’s refugee bashing, Rudd promised to close the Nauru detention centre and adopt a more compassionate approach. Rudd also promised to withdraw Australian troops from Iraq, a very unpopular war that hundreds of thousands had marched against.

By far the biggest grievance with Howard was his WorkChoices legislation which radically deregulated the labour market and used the law to severely restrict unions. The ACTU funded a massive advertising campaign against it and called national days of action that saw hundreds of thousands of workers strike and attend rallies. Rudd pledged to scrap WorkChoices promising a “workplace where everybody gets a fair go”.

The other side of Rudd

While Rudd’s rhetoric was able to connect with a desire for change there was another side to his politics. He was no socialist about to shake up the status quo. He was absolutely committed to “responsible economic management” and saw himself as part of the “reforming centre” in the same tradition as the Hawke and Keating governments, but more willing to attack the unions.

Even before being elected he made business feel comfortable by establishing a business advisory group and putting Sir Rod Eddington, who had been a CEO and a director of numerous companies, at its head.

Some Labor apparatchiks saw this as necessary to appeal to a socially conservative working class. Defeating Howard meant being “the son of Howard” argued Rudd’s former Press Secretary Lachlan Harris.

But Labor’s landslide win was a huge opportunity. Social attitudes under Howard had moved to the left. When Howard took power, only 17 per cent preferred increased social spending to tax cuts. Nine years later it was 47 per cent. After Howard privatised Telstra, support for privatisation dropped from 30 per cent to just 9 per cent.

The Liberals were so comprehensively thrashed on WorkChoices that once defeated they dropped all opposition to scrapping the laws. Labor had an “overwhelming mandate” to tear up WorkChoices, said the future treasurer, Joe Hockey.

While Rudd won the election by connecting with people’s desire for change, this is not what they got. WorkChoices was scrapped but only to be replaced by the Fair Work Act which many unionists dubbed “WorkChoices lite”. The restrictive laws unions are fighting today were almost all contained in Labor’s Fair Work Act.

Rudd also maintained Howard’s Australian Building and Construction Commission (ABCC) which was used to intimidate and harass construction unions. Two unionists, Ark Tribe and Noel Washington, were threatened with jail sentences for failing to answer questions from the ABCC during Rudd’s tenure. Labor went from promising workers a “workplace where everybody gets a fair go” to promising the bosses a “strong cop on the beat” in the construction industry.

Rudd’s apology to the Stolen Generations was very moving and grabbed international headlines, but at the same time he maintained Howard’s racist and assimilationist NT Intervention and extended income management into new areas.

Rudd’s commitment to a more compassionate approach to refugees turned out to be hollow as soon as some refugee boats arrived and the Liberals attacked from the right. Rudd froze the processing of asylum claims for Afghans and Sri Lankans and had some boats towed back to Indonesia.

All these issues massively increased the disillusionment among Labor supporters, but the straw that broke the camel’s back was Rudd’s retreat on climate change.

Rudd’s “solution” was always mild and designed to be as inoffensive to big business interests as possible. He supported a market based emissions trading scheme which allowed industry to pass on the costs to consumers, with plenty of exemptions and compensation for trade exposed industries.

When The Greens, rightly, refused to vote for it because it was so ineffective, Rudd walked away from doing anything and, according to Newspoll, lost over a million votes in two weeks.

Moving to the right

As Labor crashed in the polls and the Liberals attacked, Labor’s response was to move to the right. This just made matters worse as it extinguished any lasting hope for real change.

The rightward shift was most obvious on refugee policy. Labor went from closing the Nauru detention centre to reopening Nauru and Manus and exiling refugees there permanently, in the vain hope of “stopping the boats”.

As Labor slid in the polls the party moved to dump Rudd as leader.

But his replacement Julia Gillard was just as hollow. She marketed herself as a traditional Labor reformer. But her “reforms” were not social democratic but neo-liberal.

Her “education revolution” meant adopting the Gonski funding model and establishing the My School website and Naplan testing. The My School website created a market place in education as better off parents shopped around for better preforming schools, while Gonski funding ensured private schools continued to milk the public purse. These “reforms” have only worsened the already high levels of social segregation in our schools.

Gillard’s speech attacking Tony Abbott’s misogyny did a lot for her feminist credentials. But she was also responsible for cutting payments to single mothers, forcing them onto unemployment benefits and its regime of harassment and punishment.

The change in leadership gave Labor a short boost but it wasn’t long before the disappointment set in again. In desperation Rudd was brought back to the leadership in 2013. But Labor was already doomed.

Will Shorten be different?

With the relative success of the openly socialist Jeremy Corbyn in the UK and Bernie Sanders in the US, Bill Shorten has cottoned on that economic conservativism is on the nose and has tacked left, attacking “inequality” and “trickle-down economics”.

Whereas Julia Gillard and Kevin Rudd wanted to cut corporate taxes, Shorten consistently opposed the Liberals’ cuts accusing, “the top end of town” of “gorging themselves”. Labor is also committed to rolling back tax rorts for the rich such as negative gearing and share dividend imputation. Labor also supports the concept of a living wage for low income workers and is committed to reversing penalty rate cuts and some mild industrial relations reforms.

But at the end of the day, Shorten—like Rudd, Gillard and Labor historically—is committed to working within the framework of capitalism. This means, particularly in a period of deep crisis and global uncertainty, that fundamental change will not be delivered.

Already Shorten has assured big business he won’t be the unions’ “handmaiden” and his industrial relations spokesperson Brendan O’Connor has ruled out giving unions the “unlimited right to strike”.

In his budget reply he also promised stronger budget surpluses than the Liberals. This will force Labor to make cuts if the economy deteriorates.

But by putting low wages and inequality on the agenda Shorten has raised the question of the capitalist system itself. Rudd won the 2007 election on the back of massive union national stopwork rallies. But those rallies turned from “Your Rights At Work—Worth Fighting For”, into “Your Rights At Work—Worth Voting For.” After workers had voted Howard out, the union leaders demobilised the movement and let Rudd and Gillard trash the victory over the Liberals and the bosses.

This time around, there is the Change the Rules campaign. Although the rallies have not been as consistent, the hunger for real change is deeper. A victory over Morrison can fuel workers’ confidence. We learned last time that to really tackle inequality and injustice we have to go beyond just getting Labor elected. The fight for real change will need to continue after the election—in rallies, strikes and demonstrations where workers can show their real power to win social change.