How much would a Labor government change the rules at work? 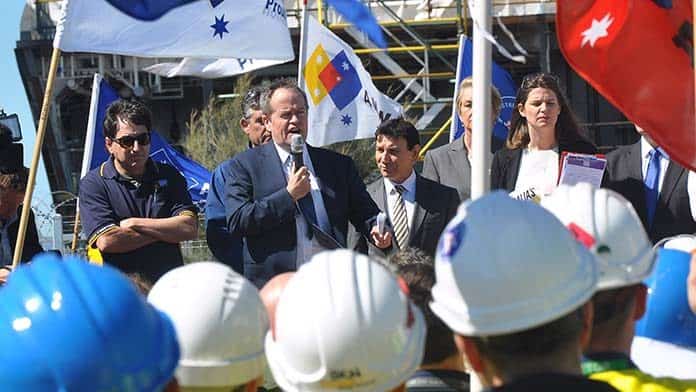 The modest scope of changes Labor wants to make to workplace laws is starting to become clear. The party’s official draft platform, released in preparation for its national conference in July, shows what to expect.

Labor’s policies echo the themes of the ACTU’s Change the Rules campaign, in talking about inequality, casualisation and low pay.

It says it would “set an objective test for determining when a worker is a casual”, to reduce casualization by forcing employers to convert workers to permanent positions, when they are actually being employed to do the work of permanent staff.

Bill Shorten has also promised to end employers’ ability to terminate expired enterprise agreements—as was done at Murdoch University, Griffin Coal and Port Kembla Coal Terminal—unless they gain the union’s consent. The use of sham enterprise agreements—as at CUB and Esso—where bosses imposed agreements ratified by another group of workers, would also be banned. Agreements would have to be supported by “a representative cohort” at the relevant workplace.

Labor is committed to abolishing the Australian Building and Construction Commission—and this time will not replace it with another body. The Registered Organisations Commission, set up by the Liberals to tie up unions in red tape and go on a fishing expedition for evidence of corruption, will also be abolished and its powers rolled back into the Fair Work Commission.

There are also gestures in the draft policy to allowing enterprise bargaining across a sector or industry, although as yet without any detail on what Labor might support, with only a vague reference to supporting “multi-employer collective bargaining” but only “where appropriate”.

The ACTU has called for the minimum wage to be pegged at 60 per cent of the median wage, an increase from 54 per cent currently. Although Bill Shorten has called for “a real living wage”, Labor wants to leave the final decision to the Fair Work Commission, with Employment Shadow Minister Brendan O’Connor declaring it should “always play a central role”. But it may tell Fair Work to give greater weight to the needs of low paid workers in making its decisions.

And Labor is committed to guaranteeing workers ten days domestic violence leave by adding it to the National Employment Standards, and reversing the cuts to penalty rates for retail, hospitality and pharmacy workers.

It has also shown some support for the ACTU’s desire for greater arbitration powers for the Fair Work Commission, at least in resolving “intractable disputes” where an employer refuses to bargain.

But there is so far nothing that would boost workers’ bargaining power through making it easier to use strike action. The requirement for secret ballots before any industrial action and the huge fines for taking unlawful action, as well as even the ban on political strikes, all introduced as part of John Howard’s WorkChoices, would remain.

Labor is even refusing to scrap the restrictions in the Fair Work Act that allowed the ban on the Sydney train workers’ strike in January. Under current laws, strikes and industrial action can be banned completely for threatening damage to the economy or to any third party.

This should come as no surprise. It was the Labor government under Kevin Rudd that introduced the current Fair Work Act containing these restrictions on industrial action. The Turnbull government has to go. But we can’t rely on Labor to “Change the Rules” we need to restore the right to strike and scrap all the anti-union laws. It will take an active industrial campaign, and serious stopwork action, to win back our rights.