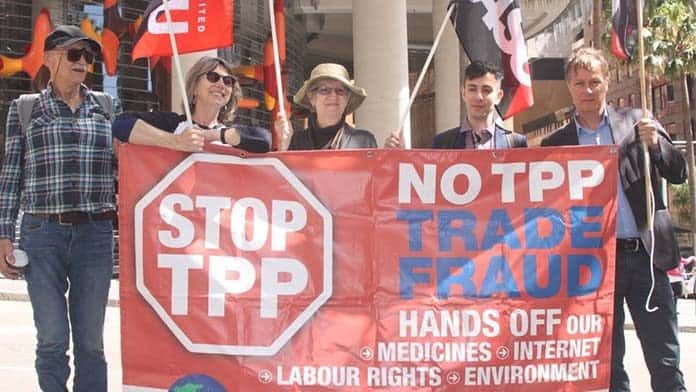 Daniel Wallace, secretary of Hunter Workers, the Newcastle Trades Hall Council, resigned from the Labor Party in response to their decision to support the Trans Pacific Partnership-11 trade deal. He spoke to Solidarity.

Why are unions opposed to signing the TPP-11?

The matter had been considered by the rank-and-file of the Labor Party at national conference, and there was a decision that only under certain conditions would Labor support the TPP. That’s been in their platform and was over-ridden in the caucus. Over-riding the rank-and-file doesn’t sit well with a party that’s supposed to represent the working class.

The TPP itself has the potential to bring labour in where skill shortages may not apply, like in regional areas and have an effect on local jobs. There’s also concern about pharmaceuticals that minor changes to original products may extend the patent life and medicines may be dearer.

Who benefits from free trade deals like the TPP?

Corporations and the big end of town benefit, there’s very little in the agreement that would assist workers. There’s a number of clauses that they say have been ruled out but they’ve just been suspended until such time as the US rejoins in the future. Corporations benefit and the government’s rights to regulate in the public interest are compromised.

What do you think of Labor’s decision to backflip and agree to support the agreement?

When power privatisation took place in NSW, Labor MPs were threatened when they breached the platform they would be potentially kicked out of the party. There’s MPs that are opposed to the TPP who spoke against it in caucus but now they’re saying, because of caucus solidarity, they’ve got to support it. Unions are saying they don’t have to support it because it goes against the platform. But they’re not prepared to do it.

What’s the response in the union movement been to this decision?

We’ve seen one union write to the Labor Party saying they’re not participating in any events or donations because of the TPP. The national secretary of the ETU said they’re disappointed and hope they’ll change their mind. The CFMEU and even the ACTU have also commented.

What do you think this means in terms of relying on Labor to Change the Rules or deliver changes like the right to strike?

It’s very clear in my view that if their own party members can’t trust them to abide by their own decisions there’s no way the union movement can trust them. The campaign on Change the Rules has got to hold them to account on any decisions made prior to the election and anything we’d like to see changed by any future government.

No to free trade, no to xenophobia

Free trade deals are designed to benefit big corporations. Governments have used them to strike down laws that reduce corporate profits, including labour and environmental regulations.

The TPP-11, the version of the Trans-Pacific Partnership stitched together after Donald Trump ended US support for the deal, is no different.

Labor leader Bill Shorten’s decision to wave it through parliament is about reassuring business that he will govern in their interests. He claims he would renegotiate side deals once in office to improve the deal, but it’s unlikely other countries involved would agree.

The agreement would also allow companies to bring in temporary workers who qualify under the existing temporary skills visa list, waving the usual requirement for labour market testing.

This means there would be no requirement to advertise the jobs or to allow workers to apply locally—a change which should be opposed.

Some unions have opposed the TPP by spreading xenophobia about migrant workers. The AMWU said the deal would, “open the gates to foreign workers”. The meat workers’ union argued against immigration in general, saying the TPP would mean more workplaces like Thomas Foods in Tamworth where, “their workforce is made up of nearly 90 per cent migrant workers, in a region where youth unemployment is currently more than double the national average”.

Workers on temporary visas are vulnerable to exploitation. They rely on their boss to be able to remain in the country. But the solution is to organise them into the unions and demand full permanent migration rights.

But it’s a myth that immigration costs jobs. Job cuts and unemployment are caused by corporate profiteering and government failure. Telstra for instance announced 8000 job cuts in June, and thousands of jobs have gone in manufacturing through automation. We should say no to the TPP, but reject the scapegoating of migrant workers.