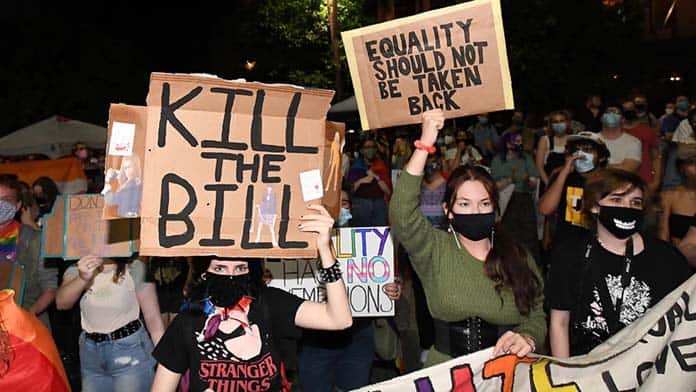 Scott Morrison has been humiliated after five Liberals crossed the floor in parliament to vote against him over amendments to the Religious Discrimination Bill. His attempt to wedge Labor over the issue blew up in his face.

Rather than see the amended bill pass the Senate, the Liberals dropped it completely, after the Australian Christian Lobby withdrew its support. Morrison has confirmed it will not return to parliament before the election.

The successful amendment, supported by Labor, would have ended the power of religious schools to expel students both on grounds of sexuality and gender identity. Morrison had refused to protect trans students from expulsion.

But Labor was willing to vote for a final bill that still allowed teachers and other workers at religious institutions to be sacked for being LGBTI+, or failing to uphold their employers’ beliefs, as well as measures that allowed bigotry under the cover of religious “statements of belief”. These could include statements such as a boss telling female workers that “god did not want women in leadership positions” or a doctor telling a patient, “disability is a punishment for sin”.

It has continually made concessions in an effort to chase the votes of conservative religious groups.

Under federal law, religious schools and institutions can already discriminate against students, teachers and other workers with regards to their sexual orientation and gender identity, as well as other characteristics such as pregnancy or relationship status, including through sacking.

Morrison’s bill threatens to overturn some state protections against discrimination, such as those in Tasmania and Victoria.

The bill should be opposed completely. Protecting religious people from discrimination should not be used as a cover to allow discrimination and abuse of LGBTI+ people.

Karen Pack points out that discriminatory religious practices often end up targeting people of faith, not protecting them. She trained chaplains at Morling College for years before she was fired after controversy over her marrying a woman.

Labor leader Anthony Albanese went out of his way to stress his support for protecting religious people against discrimination rather than recognising that the real threat is to the rights of LGBTI+ people.

Labor’s small-target strategy for the election includes compromising on principles such as LGBTI+ rights, climate, and refugees to help them glide to victory.

This a big problem, but also a risky strategy: Labor’s victory is not guaranteed, as 2019 should have taught us. This makes their promise to wind back some aspects of the discriminatory laws after the election look even more shaky.

The bill should have been opposed outright from the start. Instead Equality Australia spent months calling for amendments and relying on lobbying and parliamentary inquiries.

Some unions have hardened their position, calling for the bill to be rejected. The National Tertiary Education Union’s ACT Division supported a protest in Canberra calling to stop the bill’s passage. And the Independent Education Union launched a petition against the bill, signed by more than 3000 people.

There have also been voices of opposition inside Labor. NSW Young Labor Left launched an urgent rank-and-file petition of Labor members: “Labor must oppose the ‘Religious Discrimination Bill’.” ACT Chief Minister Andrew Barr called on Labor to oppose the bill.

There has been consistent outpouring of community outrage about the right to discriminate ever since Morrison first floated the legislation in 2018, when one poll found 74 per cent opposed religious schools discriminating against students and staff on the basis of sexuality and gender identity.

Most recently, community outrage centred on an enrolment contract by Citipointe Christian College which required students and parents to affirm that “homosexual acts” and “bisexual acts” were sinful, and that the college has the right to “exclude” trans students. Protests outside the college and over 150,000 signatures on a petition saw the contract withdrawn and the school’s principal, Brian Mulheran, resign.

Morrison’s bill is now set to be an issue right through the election campaign. He will keep trying to use it to spread bigotry and win votes. But his credibility is damaged and his own party is split.

Further protests and campaigning are needed to drive the Liberals out, and push Labor to end religious schools’ right to discriminate against both students and teachers—and to make sure there are not further concessions to the bigotry of the religious right.