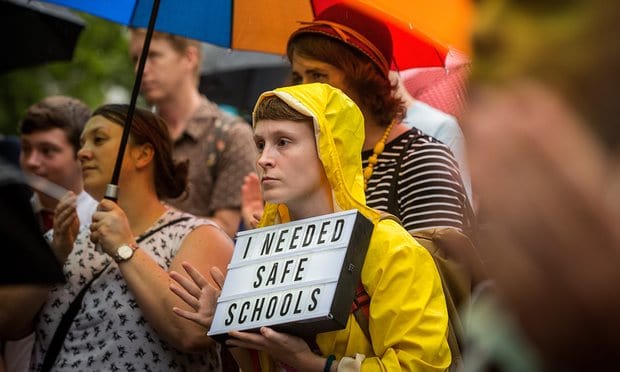 How fabulous it would be if the homophobes’ fears came true, and marriage equality really did place a tidal wave of pressure on schools to ditch the old and not-so-hidden curriculum of rigid gender roles and heterosexual standards.

Despite a marriage equality victory feeling closer, we are in the shadow of a vitriolic backlash against education programs that affirm the existence of LGBTI people.

Now even marriage equality advocates are distancing themselves from any demands for an LGBTI enlightenment in the education system. “Yes” campaign “fact checks” abound pointing out that the vote is “just about marriage”, reassuring supposedly anxious parents that the, “State Government and your local school decide what gets taught in the classroom, and updating the Marriage Act will not change that.” School principals promise that uniforms will remain gender segregated.

Benjamin Law’s Quarterly Essay “Moral Panic 101” is a timely dissection of the 2016 backlash against the Safe Schools program, the non-compulsory set of resources that schools could use to progress toward (or even just gesture in the general direction of) eliminating LGBTI school bullying.

He shows how the crazed ravings of right-wing Murdoch journalists like Miranda Devine, Piers Ackerman and Natasha Bita set an agenda that State and Federal Liberal politicians were all too willing to add their own frothing conservative moralism to.

The “moderates” in the Coalition like Malcolm Turnbull capitulated to internal pressure to “review” the material. Then, against the advice of the review panel, Education Minister Simon Birmingham gutted the program and ultimately ended its federal funding.

This was a dress rehearsal for the talking points the right is trying to use to derail marriage equality. The same homophobic and transphobic moral panic has also resulted in a ban on public schools in NSW screening Gayby Baby, a documentary about growing up with gay parents, and a ban on NSW teachers revealing to students that gender roles are socially constructed! The principal of private Anglican girls school Kambala in Sydney resigned in April after a campaign of moral panic against her for hiring and retaining gay teachers. The prospect of ending religious schools’ right to fire and expel LGBTI teachers and students feels more distant, despite the rainbows, yes signs and love hearts around the country.

Law’s account reveals how unimposing and modest the Safe Schools program actually is. The program was designed to address widespread and out of control homophobic and transphobic bullying. La Trobe University’s 2010 Writing Themselves In Again report found it had actually increased in the past decade, with 61 per cent of LGBTI young people reporting verbal abuse and 18 per cent physical abuse.

No school that is a signatory has been required to do anything practical at all—the program’s lesson plans are wholesomely pitched, the training sessions and “guidance and consultation” on making school policies more inclusive and accepting are optional (and unavailable federally from 31 October).

As Law points out, this makes the fulmination and lies about schools teaching “radical gay sex” all the more preposterous.

It’s not included in Law’s account, but this unenforceable approach has sometimes been to the frustration of LGBTI students and staff. In 2014, one school signed up to the Safe Schools Coalition in Victoria banned a student from taking a same-sex partner to the formal, and Safe Schools’ response was not to condemn the school for discrimination but gently to suggest it review its policies. Another Safe Schools principal stopped a student LGBTI group from forming and campaigning for marriage equality.

Law concludes by encouraging us to “think of the children” for whom Safe Schools was designed. But his own account shows that we need much more than sensible ideas to support young people.

If a backlash can kill such modest gestures towards tackling homophobia, we need a movement willing to confront and challenge the conservative agenda head on.

That would mean marriage equality advocates declaring the campaign will not stop until we win compulsory and enforceable Safe Schools reforms, with no exemptions for religious schools or cowardly principals. It would mean teachers, supported by their unions, publicly defying the NSW bans by screening Gaby Baby and letting kids in on the state secret that gender roles are not biologically hard-wired. It would mean public and private school teachers fighting together for full protection for LGBTI teachers—including the elimination of precarious contracts.

Turnbull’s plebiscite has given the right another opportunity to organise homophobic hatred. A strong “yes” vote is important, but for it to be meaningful blow to the right, the “Yes” campaign should be a full and confident challenge to all the homophobia coming from the “No” side. This means supporting mandatory curriculum reforms like Safe Schools, and an end to religious exemptions to anti-discrimination law.