Mussolini and the rise of fascism in Italy 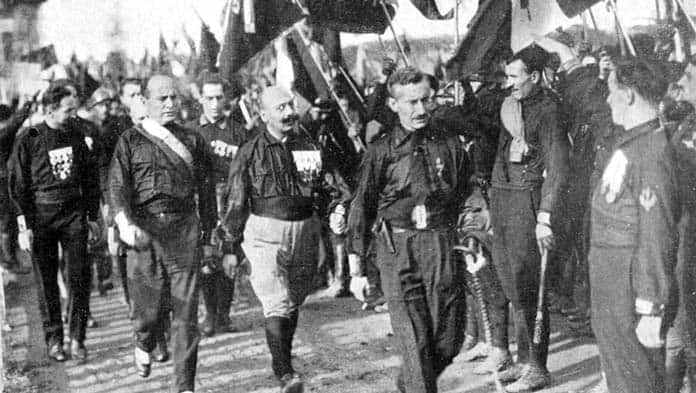 Italy was the first country where fascism came to power. Cooper Forsyth looks at what fascist rule meant and the lessons for stopping the far right today

Just weeks before the 100-year anniversary of Benito Mussolini’s “March on Rome”, which ushered in the world’s first fascist regime, Italy elected a fascist prime minister.

Giorgia Meloni’s party is the direct descendant of Mussolini’s fascist movement, formed by his former loyalists after he was driven from power.

Meloni is not about to reintroduce a fully-fledged fascist regime today, but she will use her position to mainstream fascist ideas and build a larger fascist movement.

So it is timely to look at Italian fascism, what defined it and how it could have been stopped.

On 28 October 1922, Mussolini’s Blackshirts marched on Rome, seizing control of the Italian government and inaugurating the fascist regime. The march on Rome is often portrayed as a coup d’etat, where the fascists overthrew the government by force. In reality they were invited to take power by the ruling class.

As left-wing historian Tom Behan writes: “The military forces fascism had in the field were far from overwhelming. On the morning of 28 October there were only 4000 men assembled 36 miles to the north west of the capital. There were another 2000 to the north east, and 8000 men 15 miles to the east in the town of Trivoli.

“They were badly armed, with a few machine guns and just one cannon. All three columns were without food and water, and were not in contact with each other. It was pouring with rain, and most men had neither tents nor a place to stay. But the army garrison alone in Rome contained 12,000 well equipped and battle hardened men with tanks and aircraft.”

In fact there was no military effort to stop the fascists, and the next day the King vetoed the Prime Minister’s declaration of a state of siege, and asked Mussolini to form a government.

It is hardly surprising that the Italian state allowed the fascists to come to power so easily. For the previous two years, collaboration between the authorities and fascists had been growing enormously.

Mussolini started his career as a socialist, arguing against those who saw parliament as the key to social change.

When the First World War began he broke with the socialist movement and joined the nationalist frenzy. He now opposed parliament from the opposite side—seeing democracy as too tolerant of working class organisations.

Mussolini later described fascism as “supreme anti democracy”. He argued a strong government was needed to suppress the “lawlessness” of the union and revolutionary movement.

The fascist movement emerged out of the profound social crisis in Italy as a result of the First World War. There was a deep economic crisis and such a high level of working class struggle that the ruling class feared socialist revolution. This meant the rich became prepared to consider extreme solutions, as the German ruling class was to do in allowing Hitler to take power in 1933.

Mussolini headed an independent mass movement of paramilitaries and thugs, who violently smashed strikes, unions and left-wing parties. More than other kinds of right-wing dictatorship, they aimed to eradicate every element of working class organisation and democracy.

Europe had become a slaughterhouse, where millions were sent to their deaths in the trenches. On the home front, economic life was in ruins and millions plunged into desperate poverty and hunger.

Revolution spread across the continent. In Russia the working class took control in a socialist revolution led by the Bolshevik party. This became an inspiration to workers everywhere. Mass desertions crippled armies and, in 1918, another revolution ended the war in Germany.

The situation was no less sharp in Italy. Italy had not only suffered intense shortages and poverty but had also undergone rapid industrialisation for the war effort.

Conditions in the factories were harsh and those who fought back could be sent to the front. When the war ended and these restrictions were lifted, workers had pent-up grievances to settle.

The years 1919-20, known as the “Biennio Rosso” (the “two red years”) saw a developing revolutionary situation. Spontaneous land occupations swept the rural south, while general strikes engulfed the industrialised areas of the north. Class war was intensifying, culminating in a wave of factory occupations in August and September 1920.

Almost all the factories in the north were under workers’ control, with production continuing and the idea spreading that workers could get rid of the factory owners and the rich completely and run society themselves. The capitalists, the government, the police and the military were powerless.

But the leaders of the unions and the Socialist Party failed to capitalise on the situation and take power. As a result, the occupations fizzled out and the workers movement retreated.

The industrialists and large landowners had seen how weak they could be in the face of workers’ power. So they began to look to more extreme options to protect their class interests given the apparent inability of parliamentary politics—and the whole apparatus of state power—to do so. Fascism emerged as revenge against a working class that came close to power yet failed to take it.

Mussolini and his fascist movement, founded in 1919, promised to bring an end to this “chaos” and restore Italy’s national pride.

At first, nationalist and anti-socialist rhetoric was paired with promises to improve the lot of ordinary people, including suffrage for women and the eight hour working day. But as the movement consolidated into the National Fascist Party it became more open about its aims, calling for authoritarian measures and a right wing economic policy.

The early vagueness of fascism was a product of its desire to build mass support.

Its main base was what Russian Revolutionary Leon Trotsky described as “human dust”—groups in society which are not able to form powerful collective organisations like unions to pursue their interests.

Fascism was predominantly attractive to the middle classes, such as small shopkeepers and professionals, who were hurt by the crisis but even more terrified of working class power. But it also sought to win over disenfranchised workers and peasants, including the unemployed.

As the movement grew it also attracted the support of powerful industrialists, landowners and the capitalist class in general.

The main appeal of the fascists for the ruling class was possession of a mass movement of street fighters. Industrialists and landowners funded their “punitive expeditions” against unions, peasant organisations and socialists.

The government also hoped to use the fascists as a battering ram against the left. Fascists ran candidates as part of Liberal politician and then Prime Minister Giovanni Giolitti’s “national block” list in 1921.

The military and police too were happy to have the help of the fascists in repressing the left. It is estimated that more than 100,000 guns were passed from military arsenals to fascists during their rise to power. Police forces not only armed the fascists and turned a blind eye to their attacks, they also fought alongside them.

The attacks allowed fascists to occupy whole towns and prevent workers meeting and organising. This showed they could successfully be used to defeat what was still an incredibly powerful workers’ movement.

Anti-fascist groups spontaneously sprang up in the spring of 1921. These were called the “Arditi del Popolo”. Formed initially by returned soldiers, they quickly attracted broad layers of working class activists. Tragically, the main workers’ parties, the Socialist and Communist parties, held a sectarian attitude and attempted to prevent members from participating.

The Arditi del Popolo’s message was simple: fascism presented an urgent threat and needed to be confronted with organised force. It was soon a national organisation with more than 55,000 members.

The power of its strategy was vindicated in July 1921, when thousands of fascists attempted a punitive expedition in the town of Sarzana. They were forced to flee chaotically, suffering 18 deaths and 30 wounded. As a result, fascism suffered a huge political crisis and demoralisation, with Mussolini briefly resigning as leader. Yet the left refused to draw the lessons and back the Arditi.

Again the Arditi showed the potential to smash fascism in a final confrontation in the city of Parma, just weeks before Mussolini took power.

More than 20,000 fascists were repelled by an incredible display of working class unity and discipline—with virtually the whole working class population organised under the command of the Arditi.

Years later, Mussolini, using the euphemism of “war veterans” for fascists, commented: “If the Parma model was replicated the right of war veterans to gain control over public life would have been called into question.”

The tragedy was that, while extremely successful on a local level, the hostility of the major left wing parties meant the strategy was not implemented nationally.

As a result, the fascist movement was allowed to gain enough strength to make its bid for power. The result was the complete annihilation of unions and the extreme repression of the working class.

Today, we need to learn the lessons of this failure. As capitalist crisis deepens, we are seeing the return of fascism in mainstream politics. History shows the police and the armed forces of the state cannot be trusted to deal with this threat.

Fascists and the far right win elections in Italy and Sweden

Emmanuel Macron has beaten the fascist Marine Le Pen to take the French presidency. But Le Pen’s vote of 41.5 per cent was a significant increase on her total in the last run-off election.

Greek Nazis jailed in victory for the anti-fascist movement

The leadership of Greece’s Nazi Golden Dawn party is behind bars, with leader Nikos Michaloliakos and six other former MPs sentenced to 13 years’ jail and another 11 former MPs to between five and seven years.