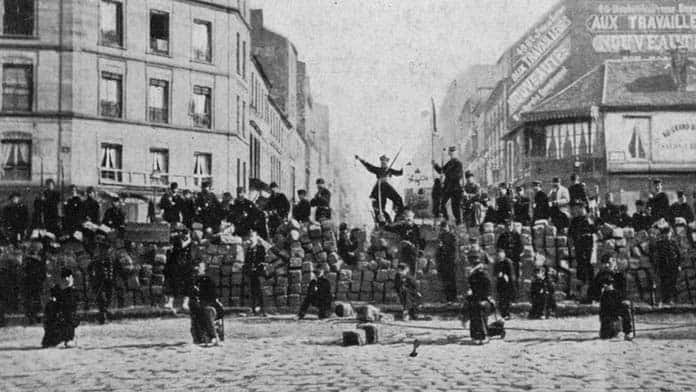 One hundred and fifty years ago the workers of Paris took control of their city, then the second biggest in the world. For 72 days they ran it collectively, as a commune—the first instance of a workers’ government.

Socialists celebrate the Commune because of its magnificent achievements, its vision and ambition, and the utter heroism of the participants. They tried to reshape what it means to be human, how we live and work. As Karl Marx said, “They stormed heaven.”

The Commune emerged from the defeat of the French army in the Franco-Prussian war.

More than 100,000 French troops had been killed and a quarter of a million taken prisoner.

In the years before the war, the French economy expanded massively. In 20 years coal production tripled. Steel production grew nine-fold. By 1870 half the population of Paris were workers, mostly earning barely subsistence wages, with 62 per cent of workplaces employing no more than two workers.

Bloody conquest, in Algeria, Indochina (now Vietnam, Cambodia and Laos) and New Caledonia had seen the French Empire triple in size. But a humiliating defeat in Mexico was followed by the disastrous war against Prussia.

In September 1870, the Prussian army laid siege to Paris. The city’s economy collapsed. By December 500,000 people were registered as paupers.

Thousands starved to death while thousands more resorted to eating rats and pets.

With most of the French army held prisoner, the Government was forced to mobilise the National Guard to defend Paris.

The Guard was a volunteer citizens’ militia first mobilised during the Great French Revolution in 1789. The small daily payment to the guards acted like a kind of dole and 340,000 men enrolled.

The National Guard elected its officers, who were also instantly recallable, and the 260 Guards battalions met daily to discuss the defence of the city.

The growing outrage at the Government’s incapacity led to a kind of dual power developing. Vigilance committees were formed in each of Paris’s 20 districts. “Red clubs” emerged where mass gatherings would discuss the siege and lambast the government.

Then, on 28 January, the French Government signed an armistice with Prussia and called elections to endorse their capitulation. Heavily backed by the provinces, it won easily. But Adolphe Thiers, who headed the new government, still did not dare to disarm Paris.

Finally, on 18 March at 3am, Thiers sent the French army into Paris to re-assert control and remove 200 cannons that the National Guard had placed at the top of Montmartre hill to defend working class areas. But at dawn the army was still there waiting for horses to pull the cannon away. The local Women’s Vigilance Committee, led by Louise Michel, sounded the alarm by ringing the church bells.

A crowd of hundreds, mainly women and children, came out, fraternising with the soldiers, imploring them to side with the working class. The troops were ordered to fire on the crowd but refused, turning their guns upside down. In that moment of mutiny, the Commune was born.

The government, fearing the rest of the army would side with the Commune, ordered an immediate retreat. The entire apparatus of the state fled to the Palace of Versailles, 20 kilometres away.

In Paris the Central Committee of the National Guard took control of the city, becoming the de facto leadership of the first workers’ state.

An election to the Communal Council took place. Using the old electoral system and with the vote confined to universal male suffrage, it was not the direct democracy that characterised the National Guard. Nevertheless, those elected to the Council on 28 March had a mandate to establish a workers’ government.

On its first day, the Communal Council abolished both the permanent army and the police. The democratic National Guard was the only armed force in the city and they called on all those of fighting age to join.

All Communal Council members and functionaries were to be paid no more than a worker’s wage and all those elected were subject to instant recall.

The Commune was to be “a working, not a parliamentary body; executive and legislative at the same time”. Council members would debate, vote and also work to implement the decisions.

Now the French government laid siege to Paris. But this time no one went hungry. There were communal canteens and provisions were distributed free to those in poverty. There was a moratorium on evictions and the payment of back rent. The Council requisitioned empty properties to house the homeless.

The Commission for Labour and Exchange was headed by Leo Frankel, a German follower of Karl Marx. The Commission immediately placed the Communal Council’s workshops under workers’ control. New contracts had to specify a minimum wage.

To keep production going, workshops whose owners had fled were passed to “the cooperative association of workers who were employed there”.

Working class women played a central role in the Commune. One newspaper wrote, “It seems like women see this revolution as precisely their own, and in defending it they defend their own future.”

The Commune began to address some of the inequities facing women. It abolished the differentiation between “legitimate” and “illegitimate” relationships when paying pensions to the partners of fallen National Guards. It also recognised “illegitimate” children when paying the Guards.

In place of religious vows, civil marriage was instituted; divorce was re-established and could be obtained if there was mutual consent; and alimony had to be paid to “women demanding separation”. These were huge blows to the church, the old moral order, and the institution of the family.

One of the most successful of the Commune’s organisations was the Women’s Union, founded by Elisabeth Dmitrieff, a 20-year-old Russian émigré and collaborator of Karl Marx. At its height, 3000 to 4000 attended its meetings.

Its manifesto called for, “A variety of work in each trade… A reduction in working hours… An end between all competition for male and female workers… Equal pay for equal hours of work… A local and international federation of the various trade sections… State credit for the setting up of these associations.”

Women’s Committees were set up in every district. Education committees established a free and secular education system. Nuns and priests were removed from the classrooms. For the first time, women were educated. Female teachers were recruited and awarded equal pay.

The experience of the Commune led Marx to make his only correction to the Communist Manifesto, adding, “The working class cannot simply lay hold of the ready-made state machinery and wield it for its own purposes.”

It was a vital lesson for the workers’ movement. The state is the apparatus the minority capitalist class uses to oppress the working class. Capitalist armies, the police, the courts, the church and bureaucratic functions all serve to maintain the power of the ruling class.

But what happens when this is turned on its head? If the working class democratically wield power in the interest of the majority and establish a workers’ state, once the old ruling class is finally defeated, the state itself can begin to wither away.

Fatally, the Commune never resolved how best to defend itself against the Versailles government. Thiers successfully called on the Prussians to return French soldiers being held prisoner to be used against Paris.

On the evening of 22 May, Versailles troops entered Paris.

For eight days, in what became known as Bloody Week, the National Guard, with the active involvement of women, fought to hold back the French army. Some 120 women fighters held the barricade on the Place Blanche.

The reprisals against the Communards were merciless. Anyone captured was executed on the spot, some along with their families.

Between 5000 and 10,000 National Guards were killed during Bloody Week. In the weeks that followed more than 20,000 were executed by firing squad.

Women were savagely treated as the state tried to extinguish the example of the women Communards.

The revolutionary women of Paris horrified those who defended the bourgeois order.

The director of the Theatre Francais wrote, “When we remember the squads of women, armed, uniformed, bedecked with sashes around their waists and red cockades, running through the streets and, like hysterics in politics, preparing for the implacable resistance of the last eight days, we can only wonder from what slime the human species is made and what animalistic instincts, hidden and ineradicable, still crouch in the dark soul of mankind.”

About 40,000, including women and children, were tried by military courts. Ten thousand were convicted with 4000 transported to New Caledonia.

Writing just two days after its defeat, Karl Marx paid tribute to the Commune. “Working men’s Paris, with its Commune, will be forever celebrated as the glorious harbinger of a new society. Its martyrs are enshrined in the heart of the working class.”

The experience of the Commune foreshadowed the recallable delegates and workers’ councils (soviets) of the 1917 Russian revolution.

Writing State and Revolution just before workers seized power that year, Lenin wrote, “The Commune is the form ‘at last discovered’ by the proletarian revolution, under which the economic emancipation of labour can take place.”