Rebellion against racist cops and a racist system sweeps the US 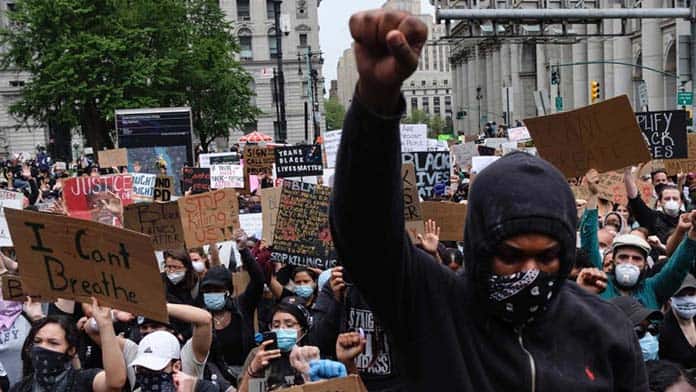 Night after night of mass protests and riots have swept the US following the brutal murder of George Floyd at the hands of police.

Fresh protests erupted following the police shooting of Rayshard Brooks on 12 June, who was asleep in his car at Wendy’s store in Atlanta.

This is a cry of rage against a system of racism and inequality. The anger has been simmering for decades, and the coronavirus crisis has only heightened the bitterness against Trump and the system.

Police harassment and killing of African Americans is routine. Being shot by police is one of the leading causes of death for young Black men in the US.

In December 2015, 26-year-old Dungutti man David Dungay Jnr was killed by prison guards in circumstances shockingly similar to George Floyd in the US. Yet the NSW Coroner has refused to recommend charges against any of those responsible.

Racism remains at the heart of US capitalism. Black people are six times more likely to be imprisoned than whites. On average they have one tenth of the wealth of white households.

The coronavirus pandemic has intensified this oppression, devastating Black communities.

Black people are dying at rates 2.4 times those of white Americans, with many forced to work in unsafe conditions in low income jobs classified as “essential”, while others stay home. Unemployment amongst Black Americans has rocketed to 16.8 per cent in May.

Donald Trump’s racist provocations all through his time in office have encouraged racists and the far right.

He has set out to demonise the protesters and encourage the brutal police crackdown, first tweeting “when the looting starts, the shooting starts”, then threatening to deploy the military if the protests continued.

Today’s riots are reminiscent of those that erupted in Black ghettos across US cities in the 1960s, raging against many of the same issues of police racism, poverty and slum housing.

That decade saw the height of the Black civil rights movement led by Martin Luther King along with the emergence of a more radical movement around groups like the Black Panthers.

At the time the establishment was almost entirely white. As the struggles lost momentum in the face of recession and increased state repression, the focus of efforts to win change shifted more and more to electing Black people into positions of power.

This meant that if you wanted something done, instead of relying on protests and grassroots organisation you could go to a Black mayor, a senator, or congressman.

Today African American politicians have built up significant influence inside the Democratic Party.

Another result of this was the growth of a Black middle class. The civil rights movement had won the right for Black people to attend elite schools and eventually to take positions on the boards of major US corporations.

The end result was the election of Barack Obama as the first Black president in 2008, something that was inconceivable a generation before.

There were huge expectations, fuelled by Obama’s promises of “hope” and “change you can believe in”. But Obama continued the bank bailouts in response to the 2007 financial crisis that handed trillions to Wall Street. In March 2009 he met CEOs of the leading banks and reassured them he was on their side, saying, “My administration is the only thing between you and the pitchforks.”

During his time in office the only people to increase their incomes were the top 20 per cent of the population.

For many poorer African Americans in particular, nothing seemed to change.

While a small layer of African-Americans have moved into the middle class, the overwhelming majority continue to suffer brutal class inequality inside the wealthiest nation the world has ever known.

It was also during Obama’s time in office that the Black Lives Matter movement first took to the streets.

Despite having a Black president in the White House and more Black people in positions of power than ever, cops were still getting away with shooting Black people dead in the street.

The reason for this would have been clear to Black radical Malcolm X, who pointed out in 1964 that, “You can’t have capitalism without racism.” Martin Luther King also argued in 1967 that, “We must see now that the evils of racism, economic exploitation and militarism are all tied together… you can’t really get rid of one without getting rid of the others.”

Racism remains structured into capitalism. It remains crucial to the capacity of the ruling class to divide and rule.

The decades of hoping to win change through working within the system have failed. The rebellion rocking the US is a sign of hope that ordinary people are starting to see the need to take action themselves.

The protests are facing down the armed might of a militarised police force armed with tear gas, rubber bullets, automatic weapons and tanks.

The power to resist this exists in the organised working class mobilised across racial lines.

White workers have an interest in rejecting all the ideas of racial superiority and division in order to unite against a system that keeps workers of all racial backgrounds oppressed by crushing economic inequality. With 40 million Americans now being pushed into unemployment through the current crisis, the willingness of the system to impose misery on working people across the US has never been clearer.

Workers have forged unity in struggle across the racial divide many times before. The recent teachers’ strikes involved multiracial workforces and took up anti-racist demands in places like Los Angeles, Oakland and Chicago.

In Minneapolis and New York, bus workers have refused to help cops transport arrested protesters to jail. The Amalgamated Transit Union’s 1005 branch declared, “Minneapolis bus drivers—our members—have the right to refuse the dangerous duty of transporting police to protests and arrested demonstrators away from these communities where many of these drivers live.”

Workers at a Mexican restaurant in Columbus, Ohio walked off the job after being asked to produce 500 tacos for police. On 19 June, the day marking emancipation from slavery in 1865, the International Longshore and Warehouse Union (ILWU) shut down 29 ports on the West coast with a one day strike in solidarity with the protests.

And nurses and medical workers have also come out of their hospitals still dressed in personal protective gear to applaud demonstrators, with some joining the protests.

In Australia, union support for the 1966 Gurindji walk-off for land rights was crucial to its success. Unions also supported the Tent Embassy and went on strike for land rights in the 1972 Black Moratorium, and have supported many more recent campaigns for Aboriginal rights and to welcome refugees.

In the factories, the schools, offices, public transport systems and the hospitals it is also the working class that keeps society operating.

United workers’ strike action has the ability not just to paralyse the working of the capitalist economy, but to take control of it out of the hands of the top 1 per cent into those of ordinary people.

The movements of the 1960s stopped short because they were unable to mobilise that power in the fight for change.

It will take a revolution from below, based on such mass movements of ordinary working people, to get rid of both the racism and economic inequality that are structured into US capitalism.

Riots are a cry of rage against injustice

The wave of anger across the US has seen widespread rioting. In Minneapolis, where George Floyd was murdered, over 1200 buildings were set on fire including the 3rd precinct police station.

Some have condemned the riots, like Scott Morrison, who said it wouldn’t, “change anything by burning anything down or by looting any shops”.

But people riot for good reason—they are tired of calls for justice being ignored and can see no other way to strike back. It is over five years since protests in the US first had to assert that “Black lives matter”. Yet the police murders and injustice continues.

We are on the side of the rioters and their rage against the system.

Much of the rioting has been targeted. The police station in Minneapolis was among the first buildings burnt down.

Poor people are also stealing items they desperately need. Many supermarkets and Target stores have been hit, with people carrying out products like nappies.

But the raw anger of the rioting has also seen small Black and minority-owned businesses destroyed.

Riots are an expression of rage against the system. But they are rarely able to last long or produce ongoing organisation.

To move from riot to revolution requires taking the anger on the streets into action in the workplaces—and building the strikes and ongoing workers’ organisation that alone has the power to bring down the system.