The Egyptian Revolution—18 days that shook the world 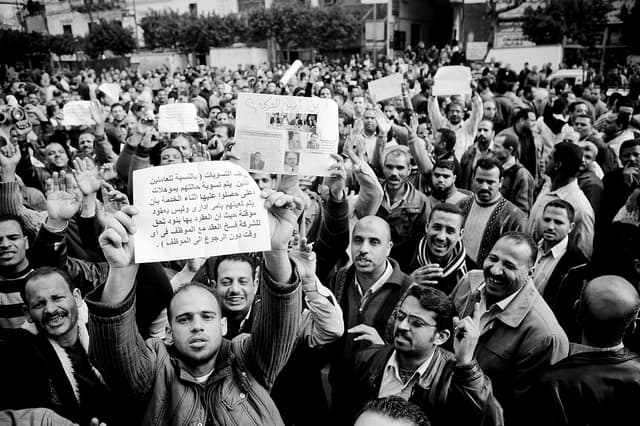 A revolution in Egypt in 2011 overthrew a brutal dictator and gave a glimpse of how society could be run differently. Egyptian revolutionary Hossam el-Hamalawy tells the story

Ten years ago this month, millions of Egyptians took to the streets in a revolution against the country’s dictator.

The uprising lasted for 18 days, before it forced Hosni Mubarak to step down.

He had ruled the country with an iron fist for roughly three decades. The revolution should be celebrated and remembered.

The Egyptian Revolution was largely presented in the media as a revolt by “internet savvy” youth using social media and smartphones to organise a sudden revolt. This was mistaken, but it suited some groups in and out of Egypt.

It suited the Egyptian middle class, which was suffering under Mubarak’s neo-liberal reforms. It wanted a limited revolt to change the head of the regime, and hopefully introduce some liberal political reforms to allow it a bigger say in how the country was run.

It suited the Egyptian army generals, who were shocked by the revolt. They wanted a quick end to the unrest in the streets, with cosmetic political changes.

These would leave power structures largely unchanged and safeguard the privileges of the military institutions.

It suited the Western backers of the Egyptian regime, who for three decades had armed and financed Mubarak.

They saw him as an essential force for regional stability, the continuous flow of oil, and protection of the Israeli state and Suez Canal. The Western imperial powers were concerned a radical change in the most populous Arab country could threaten their class interests.

The reality, however, was different from their narrative of a “Facebook” revolution.

The January 2011 revolution was a product of an entire decade of struggles that were brewing in Egypt.

They started with pro-Palestinian protests that swept the country in autumn 2000.

The movement revived street politics, and won a limited margin that had not existed previously, within which it could organise against the regime.

After three years of continuous mobilisations, the Palestine solidarity and anti-Iraq war movements metamorphosed into Kefaya, Arabic for “Enough”. This took on Mubarak and his plans to have his son Gamal succeed him.

Kefaya’s protests did not go beyond a few thousand. But they electrified the country. The rise of satellite television channels, which took its slogans and messages to large sections of the population in Egypt and abroad, helped.

Among those who followed the gradual erosion of Mubarak’s grip on society were the Egyptian workers. They had borne the brunt of the neo-liberal reforms implemented by Mubarak and his son’s associates and cronies.

In December 2006, thousands of women workers in the Nile Delta town of Mahalla, which housed the largest textile mill in the Middle East, struck over pay. They called on their male colleagues to join action.

The mill struck and forced the government to concede, triggering a wave of mass strikes across the country’s textile sector. Strikes then spread to virtually all other industrial and service sectors.

Mass strikes within the factories’ compounds soon developed into local uprisings in the streets of Mahalla, and later other smaller towns in the north. Farmers’ clashes with the police over land escalated. Protests by the urban poor in the capital and the provinces over housing issues became almost daily news. Anti-police brutality riots fuelled a vibrant human rights movement.

The Coptic Christian minority held a series of mass demonstrations against religious sectarian violence, and demanding an end to discrimination.

On the eve of January 2011, Egypt was a classic case of what Russian revolutionary Vladimir Lenin described as a “revolutionary situation”.

Lenin said this occurs “when it is impossible for the ruling classes to maintain their rule without any change; when there is a crisis, in one form or another, among the ‘upper classes’, a crisis in the policy of the ruling class, leading to a fissure through which the discontent and indignation of the oppressed classes burst forth. For a revolution to take place, it is usually insufficient for ‘the lower classes not to want’ to live in the old way; it is also necessary that ‘the upper classes should be unable’ to rule in the old way.”

Fear of Mubarak and his police was largely gone. The torture and murder of an middle class young man, Khaled Said, was enough to spark an uprising.

Had the murder of Khaled Said happened in 2000 or 2007, it would not have triggered an uprising.

In fact, Mubarak’s torture machine had been producing victims and dead corpses regularly, almost on a daily basis.

But only after a decade of accumulating dissent and anger did the Egyptian people feel the courage to take on the regime and its security apparatus.

They did so on 25 January, the National Police Day.

The 18-day uprising witnessed heroic fights in Tahrir, whose images were aired to the rest of the globe. Despite the heroism in the squares, however, it was largely the factories that brought down the dictator.

The protests that started in Tahrir soon spread to workplaces. Every single sector went on strike. The military junta had to rush to force Mubarak out, or else the entire regime might collapse.

The overthrow of Mubarak was enough to end the protests—temporarily—in the public squares. But the strikes in the factories and the ministries’ civil service were only starting.

The strikes had common demands—for job security, independent trade unions and the impeachment of corrupt bosses who were part of Mubarak’s ruling National Democratic Party.

The military junta denounced the strikes, but so did sections of revolutionaries.

They regarded the workers as “selfish” instead of seeing the strike wave as the embodiment of the fight for social justice slogans raised in Tahrir.

A genuine mass revolutionary party, that could provide leadership for the strike wave, didn’t exist. So the revolution was dominated by the reformist opposition. It pushed for a polarisation in the political scene along secular/Islamist lines, instead of polarisation over class.

This opened the door for agents of the Mubarak regime to rebrand themselves as a dissident revolutionary force against the mainstream Islamists (the Muslim Brotherhood) and the Salafis.

The army generals were happy to ally themselves with the Islamists in the first two years of the revolution. The Islamists promised to end the revolt in the streets and protect the military’s share of the cake.

Yet the alliance became shaky when it became clear the Muslim Brotherhood could neither co-opt the revolt nor diffuse it.

The military in secret reached out to the secular opposition (leftists, Arab nationalists, liberals), and secured its backing for a coup in July 2013.

What followed were the biggest massacres in Egypt’s modern history, amid the cheering of the Egyptian leftists.

They dubbed the counterrevolution, led by General el-Sisi, a “war on religious fascism.” It was only a matter of time before el-Sisi finished off the Islamists and turned his attention to the left and liberals.

The picture in Egypt today, a decade after the uprising, is bleak. El-Sisi’s prisons house roughly 60,000 political prisoners of all shades, including socialist comrades.

All independent unions have been crushed.

Youth movements and political parties have either been co-opted, besieged or paralysed.

Wildcat strikes break out every now and then, in addition to sporadic unrest over home demolitions. The Egyptian security services, with the full backing of the West, are embroiled in a dirty war, in the name of fighting terror.

Counter-revolutions do not simply restore the status quo. They regress society to a lower bar on all levels and fronts.

It is not wishful thinking to say there will be another Egyptian Revolution in the future. The underlying demands that ignited the 2011 revolt (bread, freedom and social justice) have not been met.

And the military dictatorship cannot provide solutions for such structural problems. El-Sisi’s policies are only making matters worse.

But a revolution will not simply break out because the people are suffering, or the economic situation is bad.

There has to be hope that, if the Egyptian people take the risk and confront the regime, there will be a positive outcome.

Regaining confidence in actions from below will take time. And it may require a long chain of smaller struggles that will eventually accumulate and snowball.

This must go hand in hand with trying to rebuild the organisations that could sustain the mobilisation—independent trade unions and revolutionary parties.

Such recovery from the defeat will not take a short time. But the next time we will be more ready, and hopefully we will have learned lessons.

Protests took to the streets of Egypt in April despite a ban on demonstrations. The coordination and determination of the mobilisations marks a shift in the confidence of the opposition to the regime.

If you want to understand the social processes and economic contradictions which led to the Egyptian revolution in 2011, read this book. It also explains why the military is back in charge and waging a counter-revolution, but never suggests this was the inevitable outcome.

Abbott and the US approve Egypt’s crackdown

Yet last month the US gave the military regime its seal of approval when Secretary of State John Kerry announced the release of $575 million in US military aid to Egypt.