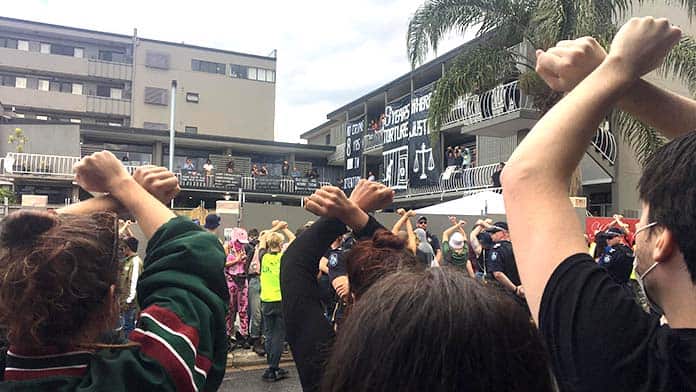 Around 400 protesters defied the strenuous efforts of Queensland’s Labor government to ban a pro-refugee demonstration outside the Kangaroo Point hotel, which is holding around 105 refugees transferred from Manus and Nauru for medical treatment.

The protest called immediately for the free movement of the refugees being held in the Kangaroo Point hotel, and for the release of all refugees into the community by Christmas 2020.

In events reminiscent of the days of right-wing premier Joh Bjelke-Petersen, police staged late-night visits on presumed organisers of the planned rally serving Supreme Court notice-of-appearance documents on them.

The Supreme Court action, brought by the Labor Attorney-General, sought to ban individuals from, “attending or encouraging others to attend” the rally that had threatened to sit-in on the Story Bridge.

Despite Labor ministers publicly presenting COVID-19 restrictions as the excuse to ban the rally, a theme beaten up by the media, the court documents did not refer to COVID at all, only “public rights of way” ie blocking traffic.

It was an unprecedented use of the Attorney-General Act and the Supreme Court to issue injunctions in an attempt to stifle the right to protest.

On the day of the rally, despite scores of police being mobilised to intimidate the action, protesters successfully took to the streets, marching around the Kangaroo Point hotel-prison. The police did manage to push protesters off the road outside the hotel, where the rally re-assembled to hear more speakers from both inside and outside the hotel.

With the refugees’ daily protests on the hotel balcony continuing, the Kangaroo Point hotel will remain a central focus for the campaign in Brisbane.

Three days after the Kangaroo Point rally, an early morning rally marched through Brisbane streets to protest against the re-opening of the Christmas Island detention centre.

The re-opening of the main detention centre there, the most isolated of Australia’s detention prisons, has been universally condemned, including by the island’s residents. While the government has said that the Medivac refugees being held in detention and the Kangaroo Point and Mantra hotels will not be transferred to Christmas Island, the government cannot be trusted.

Anyone sent there is cut off from family as well as community support. Although many being transferred there have pending legal cases, the island’s remoteness makes legal support more difficult. There is no wi-fi and the internet cannot be accessed on their phones.

The lack of medical facilities on Christmas Island is notorious. The inquiry into the death of Iranian refugee, Fazel Chegeni Nejad, who was found dead outside the detention centre fence in 2015, made particular recommendations relating to the mental health risks for people in detention on the island.

Meanwhile, despite the increased risk of exposure to COVID-19 associated with moving large numbers of guards and people from one detention centre to another, there have been at least three flights from Yongah Hill to Christmas Island, carrying around 48 people. Two flights from Villawood in Sydney, and one from Brisbane, have transferred people to quarantine in Yongah Hill before they are moved to Christmas Island.

Among those transferred to Christmas Island are refugees whose visas have been cancelled.

The government tries to justify re-opening Christmas Island with the claim that only non-citizens who have committed crimes will be transferred there. But it is a draconian aspect of the Migration Act that allows Border Force to impose extra-judicial punishment on non-citizens, including refugees, even though they have served any sentence imposed by the courts.

Immigration detention is the real crime. Christmas Island and all the detention centres should be closed.