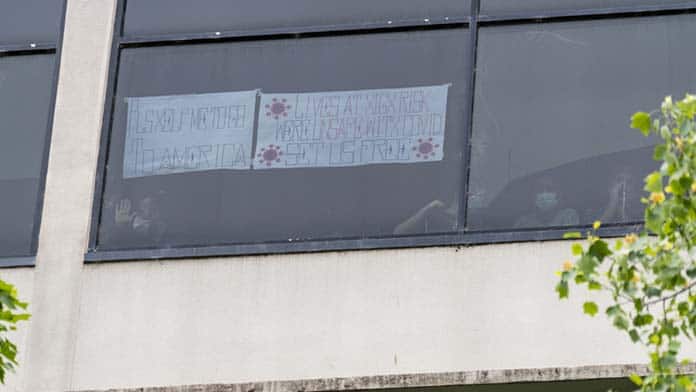 At the height of the COVID-19 outbreak among refugees in the Park Hotel prison in Melbourne, 22 of the 46 refugees were infected, an infection rate rivalled only by the worst of the outbreaks in aged care homes.

The government has never revealed how many Serco and Border Force officers at the hotel were also infected, although it must have been an officer who brought the infection into the facility.

Mohammad Sohrabi, an Iranian refugee hospitalised with severe COVID, has been returned to the Park.

The COVID scandal at the Park has brought renewed calls for the Medevac refugees to be freed from detention. There were protests outside the Park, called by the Refugee Action Collective and backed by the Australia Nursing and Midwifery Federation.

In just two days, more than 11,500 people signed a petition calling on the government not to send Mohammed back to the Park. A snap vigil was called at St Vincent’s hospital as soon as Mohammad was told he was being discharged but wasn’t enough to prevent Serco and police moving him back.

The outrage at the government’s negligence did win some changes inside the facility. Since the Park became a prison last December there had only ever been one nurse working, from 8am-4pm, Monday to Friday. In the early days of the outbreak, the same nurse was “caring for” both positive and negative refugees, an astonishing breach of basic COVID care protocols.

But as pressure mounted, a second nurse was employed working 8am-4pm; then more were rostered to work on weekends and around the clock. But the windows, sealed shut by Border Force in December 2020 to prevent refugees communicating with protesters outside, still didn’t open.

Eleven days after the outbreak, with COVID-positive and negative residents still housed on separate levels of the same facility, the government finally issued an air-filter for each room.

The government only narrowly avoided a COVID outbreak inside Melbourne’s MITA detention centre, where a large number of infected guards resulted in three compounds being locked down with just one infection, so far, among detainees.

The calculated indifference to refugee lives in the Park (and MITA) can only be understood as an extension of the deliberate cruelty of offshore detention that has kept refugees in detention, on and offshore, for over eight years. It is a glimpse of the brutality that has been systematically inflicted on asylum-seekers sent offshore.

Scott Morrison is determined to maintain that brutality as the central feature of Operation Sovereign Borders, to deter and deny protection to asylum-seekers arriving by boat. In September, Australia and Nauru signed a memorandum of understanding to maintain offshore detention on Nauru, indefinitely.

Money is no object. Between 2017 and June 2021, the government awarded contracts worth $1.419 billion. Between March and August 2021, the company Canstruct was paid an average of $25.9 million a month for “welfare and security services” on Nauru for an average of 180 detainees. Today, about 107 people are still detained there.

In October, the government signed an agreement with PNG to hand over total responsibility for the remaining 124 asylum seekers and refugees to the PNG government. The agreement gives refugees until 10 December to decide if they are going to stay in PNG or voluntarily transfer to Nauru.

But unless people are very sure they have been accepted to the US or Canada and are willing to wait in Nauru, and given no certainty of resettlement in New Zealand, Nauru is a step into oblivion—indefinite status as a non-person.

But an indefinite future in PNG is also no alternative.

From the 3127 asylum seekers sent to Nauru and Manus island since July 2013, around 300 are still held in PNG, on Nauru and in detention in Australia.

Over the last few months a number of federal Labor MPs (including Ged Kearney, Josh Burns, Alicia Payne, Andrew Giles and Sharon Claydon) have called for the release of the Medevac refugees and all those who were brought from PNG and Nauru but who are still detained.

But offshore detention remains Labor policy. The refugee movement needs to keep up the pressure to free the Medevac refugees and fight to get rid of the Morrison government, but we also have to prepare to fight an Albanese Labor government to bring offshore detention to an end, and bring all those in Nauru and PNG to permanently settle in Australia.