Detention is a coronavirus danger—free the refugees now 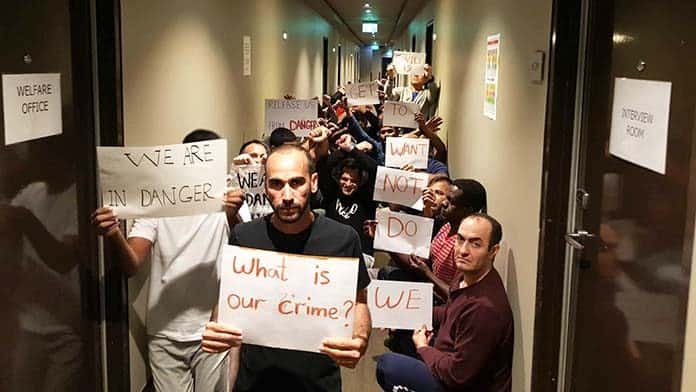 As the coronavirus spreads, calls are growing louder to free immigration detainees from the detention centres and hotels.

Almost 26,000 people have signed the “Human Rights for All” petition for their release. The Australasian Society for Infectious Diseases and the Australian College of Infection Prevention and Control have issued a joint statement echoing the call.

Refugees, almost all of them from Manus, staged a protest in Melbourne’s Mantra Hotel, with placards saying, “We don’t want to die of COVID-19.”

In Villawood, hundreds of detainees have signed a letter asking to be released and detainees have tried to keep Serco guards out of some of their compounds.

The revelation that two staff members at Sydney’s Long Bay jail hospital tested positive for COVID-19, and four prisoners showing symptoms, has highlighted the fact that prisoners face a high risk of infection.

Yet, as NSW prepares legislation to allow for the early release of prisoners from jail, Border Force and Serco are damned by their indifference to the risks inside their immigration prisons.

Unrest is growing in the detention centres and the hotels (in Brisbane, Darwin and Melbourne) that are holding refugees ironically transferred to Australia for medical treatment, now having their lives once again put at risk by the Australian government.

The refugees are the definition of vulnerable people, many with underlying medical conditions such as asthma, diabetes, heart and kidney problems, confined in places where any idea of social distancing is a joke.

With all movements between the hotels and the detention centres cancelled, the refugees have no fresh air. At Kangaroo Point (which has 80 refugees and around 40 staff at any one time) all activities are cancelled, yet English classes continue with at least 20 people in a room that doesn’t meet the four square metre rule.

One refugee told Solidarity, “We are living in a time bomb. Serco guards come and go. It only takes one of them to bring the virus. We are really in a cage.”

Detainees are in cramped conditions, and eat in crowded meal rooms. At Kangaroo Point the limited hand sanitiser (one on each floor) ran out several days ago. Despite constant requests none has arrived.

In Yongah Hill, it seems there is no sanitiser, only soap. Mantra hotel is even short of food, because of problems sourcing supplies, according to Serco.

There has already been one scare with a Serco guard in Brisbane testing positive for the virus.

Yet Border Force and Serco have made almost zero preparations for the virus. In every detention centre and hotel, there are complaints that the guards do not take the situation seriously.

Twice a day, at least 40 guards swap shifts. Few of them wear gloves or masks and are touching chairs, door handles, railings, all day. Detainees are even patted down by guards without protection.

Immigration detention has exposed the priorities of rulers around the world. In the US, where there are 37,000 people in immigration detention, more than 3000 doctors have signed a letter urging ICE (Immigration and Customs Enforcement) to release detainees—particularly  those over 60 and people with serious chronic medical conditions that put them at higher risk. There are hunger strike protests in three detention centres in New Jersey, after first staff and now two detainees were tested positive for COVID-19.

Astonishingly ICE has put out a call for companies to supply 45,000 N95 masks, even though hospitals are running out of the crucial surgical masks. On Sunday 22 March, New York reported it had only ten days of mask supply.

In Britain, three immigration deportation centres are holding people with symptoms of coronavirus. While High Court action is being taken to try at least temporarily to free the detainees, a government statement said, “our priority is to maintain the lawful detention of the most high-harm individuals, including foreign national offenders.”

The threat of the coronavirus shows even more starkly how much the barbed wire of detention is integral to the system that imprisons us all, and puts all our lives at risk.

We might not be able to rally openly this Palm Sunday, but we need to keep alive the fight to end detention and free the refugees.