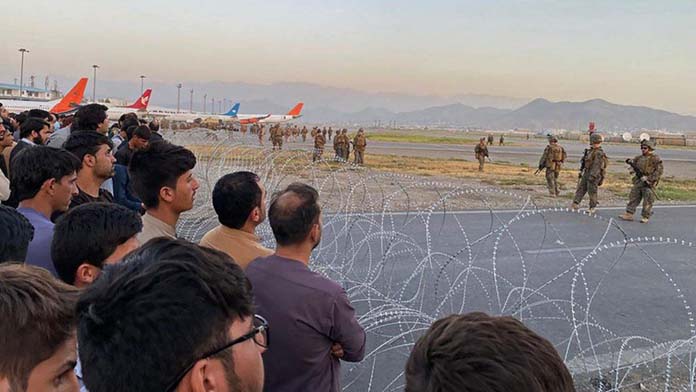 The Afghan crisis has exposed everything that is rotten about Morrison and the government’s anti-refugee policies.

Morrison has admitted that the Australian government evacuation efforts will not reach even all Afghans who worked with and supported Australian troops. Yet he insisted that Australia will only help those who come through “official channels”.

While thousands massed at the airport in Kabul desperate for a way out, Morrison has slammed shut any “official channels” to Afghan refugees in Australia on temporary visas.

There are 4300 Afghans on temporary protection visas (TPVs) and thousands more on bridging visas waiting for applications to be processed. But Morrison warns that there will be no permanent residency, no citizenship for them and no safety for their families.

Morrison says he will accept 3000 Afghan refugees this year but not the families of Afghans on temporary protection visas in Australia; they are officially barred by the terms of the temporary visa.

Morrison is channelling Tony Abbott’s callous “Nope, nope, nope” response in 2015 when he refused to help Rohingya refugees dying in boats as they fled persecution in Myanmar.

Later in 2015, Abbott also refused to accept Syrian refugees caught in the humanitarian crisis, until tens of thousand of protesters demonstrated across Australia and forced him to open the door. Abbott eventually agreed to establish a special intake of 12,000 Syrian refugees (over four years), well behind the 30,000 that Canada accepted in just one year.

A special intake is once again being demanded by the Afghan community and the refugee movement.

Just as Australia’s bombing in Iraq and Syria helped create the Syrian refugee crisis in 2015, Australia’s imperialist intervention in Afghanistan has helped generate the current dire situation. And Morrison’s offer is as pathetic as Abbott’s was. Canada and the UK are two other countries that partnered the US occupation. Canada is accepting 20,000 immediately and the UK says it will accept 5000 in the next year, alongside another 5000 for those who assisted the British military.

Far more than 3000 visas will be needed just for the family members of refugees in Australia. Then there are another 7000 Afghan refugees in Indonesia that Australia should immediately resettle but who are also excluded from Australia’s “official channels” since Morrison, as immigration minister in 2014, banned resettling refugees from Indonesia.

Temporary protection visas have a shocking history and are an abuse of refugees’ right to enduring protection and security. Yet they are a central plank in the government policies of deterrence and have created an underclass of vulnerable people.

In 2003, thousands of Iraqi refugees were denied permanent visas because they were told that the Australian supported US invasion of Iraq was going to restore democracy and they would be able to return safely to Iraq.

Morrison has a particular responsibility for the fact that the families of refugees have been left in danger in Afghanistan. Even before TPVs were re-introduced, Morrison introduced Direction 80, placing the families of all refugees who arrived by boat “at the lowest priority”. Thousands of applications by Afghan refugees for family reunion have never been processed.

There are also hundreds of Afghan asylum seekers who have been denied protection visas because the government wrongly proclaimed that Kabul (or Mazar-e-Sharif) was safe. All those claims must be re-assessed.

There is no “official channel” for the three Afghan Medevac refugees, nor the other 53 that are in Australian detention.

On TPVs, the Labor Party is diametrically opposed to Morrison. Anthony Albanese says that all Afghans on temporary protection visas should get permanent residency and “the capacity to become full Australian citizens”. That’s a start but much more is going to be needed.

The brutal reality of Australia’s imperialist intervention and the war crimes in Afghanistan is mirrored in the government’s calculated mistreatment of Afghan refugees and asylum seekers in Australia.

Despite COVID restrictions, a rally called by refugee supporters in Brisbane needs to be the start of a concerted public outcry if we are going to win permanent visas and the possibility of safety for Afghan refugees and their families. Morrison is a thug at home and abroad—he’s got to go.