Racists use Cologne attacks to demonise Muslims and refugees 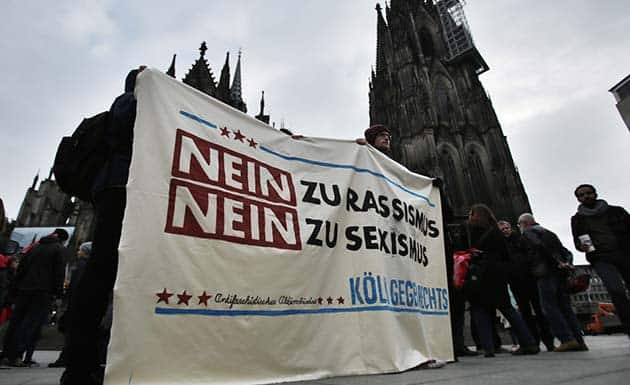 Racist politicians are trying to use horrific New Year’s Eve attacks on women in German cities to undermine solidarity with refugees. These attempts are also boosting racist groups.

They hope to stir up racism against the 1.1 million refugees that have arrived in Germany through the Syrian refugee crisis in the last year. But all these refugees are not to blame for the acts of a tiny minority among them.

In the worst incident in Cologne, at least 1000 men massed near the city’s cathedral and a railway station. More than 500 women have filed criminal complaints over attacks there—40 per cent of them sexual assault cases including at least one alleged rape.

A leaked police report describes women having to “run an indescribable gauntlet of drunken men”. It said they threw firecrackers and bottles at the women, robbed them and groped them.

The attackers have been described as of north African and Arab appearance. All of the 19 suspects being investigated by police are immigrants, 14 of them are from Morocco and Algeria. Some are asylum seekers. Similar incidents have been reported in Hamburg, Stuttgart and Bielefeld.

Gangs of north African pickpockets have existed for some time in Germany. Some have used sexual assault in the past as a way to distract women and rob them. It should not be a surprise that the illegal status some migrants are forced to live in, and the fact they find it harder to get jobs, have pushed some into crime. But this is a product of poverty and deprivation, not race or religion.

Much of the ensuing debate has blamed Arab and Muslim “culture”.

Chancellor Angela Merkel has proposed changing the law to make it easier to deport asylum seekers who commit crimes.

This would introduce a two-tier system, where criminals who commit the same act would receive different punishments according to their country of origin.

Cologne police chief Wolfgang Albers has been suspended. Police initially played down the attacks, reporting a “calm” night despite later admitting the opposite.

Mayor Henriette Reker proposed a “code of conduct” telling women to keep at “arm’s length” from strangers to avoid attack.

This holds victims, instead of perpetrators, responsible for sexual assault. It underlines that sexual violence and the attitudes and structures behind it are fully part of European society.

Rape and sexual assaults are shockingly common, including at public events like Oktoberfest and other German festivals. One in seven women have experience sexual violence, according to a study by the German Ministry of Family Affairs. According to Kate Davison, writing in Overland, “reported rapes at Oktoberfest are between two and ten per year. In 2015, 26 sexual assaults were reported at the festival, including two cases of rape”.

Yet politicians and the media have been quick to racialise these attacks. Angela Merkel said the events showed the need to, “discuss the fundamentals of cultural co-existence in Germany”. The Sat1 TV network’s breakfast show demanded the authorities “defend our values, way of life and beliefs” against “Muslim men”.

The same response has been heard outside Germany too. Belgium’s immigration minister Theo Francken announced compulsory classes for non-European migrants “on how to behave with women … in our Western culture”.

The hypocrites at the top have legitimised racist gangs who carried out a series of organised beatings in Cologne.

A group of several dozen attacked six Pakistanis near the train station where the New Year’s Eve assaults took place.

Two victims were hospitalised. Separately, a Syrian refugee was attacked.

This followed a “refugees not welcome” demonstration by racist organisations Pegida and Hodesa (Hooligans Against Salafism) in Cologne the previous day.

Despite the backlash, the bigots aren’t going unopposed.

Some 1000 people joined it from an earlier flash mob against sexual violence in front of Cologne cathedral.

Many Germans are outraged at attempts to blame 1.1 million refugees for attacks by a tiny minority—especially from those who do nothing for women.

Based on an article by Dave Sewell, Socialist Worker UK