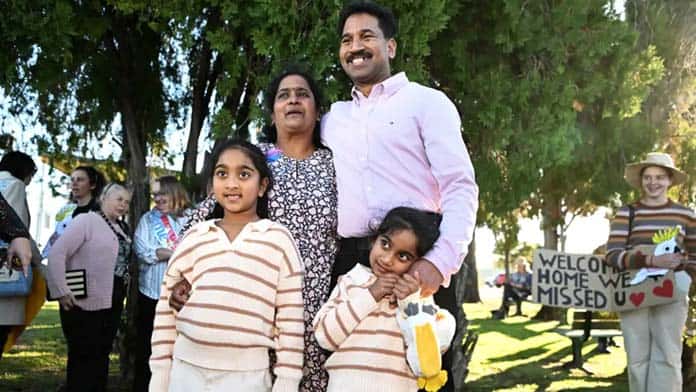 Labor made two major promises on refugees before it was elected: that it would return the Nadesalingam family to Biloela, and that it would grant permanent visas to all those refugees who arrived by boat and were only granted Temporary Protection Visas (TPV) or Safe Haven Enterprise Visas (SHEV) by the Coalition government.

Albanese said he could see “no impediment to the family being settled permanently in Australia”, adding, “but that will be a decision for the Minister”. The Minister, Andrew Giles, vaguely indicated, “What I am intending to do is allow the family to continue in Biloela with certainty.”

Real “certainty” would mean granting the family permanent visas but Giles has stopped well short of this.

With all the fanfare you could be forgiven for thinking it was Labor that got the family back to Biloela. But the real credit belongs to the tireless efforts of the Home to Biloela campaign to keep the family’s fate on the political agenda, and to the protests around the country in support of the family over the past four years.

But while Labor was trying to take the credit for the Bilo family, on asylum boat turnbacks and offshore detention, Labor is singing from Morrison’s songsheet.

Labor has already turned back four boats of asylum seekers from Sri Lanka, the first the day after the election.

All aboard were “screened out” and returned to Sri Lanka despite the government there attacking protesters.

But while O’Neil was meeting the Sri Lankan President and Prime Minister, to encourage more action from the Sri Lankan navy to stop the boats, troops turned their guns on protesters, shooting four at a petrol station north of Colombo.

If Labor really cared for the lives of people forced to flee Sri Lanka, it would be helping the Sri Lankan people topple the repressive Rajapaksa government that is driving them into poverty. Instead Labor is propping it up, offering the Sri Lankan government $50 million in aid, and more aid to stop asylum boats.

Along with turnbacks, Labor has re-affirmed its support for offshore detention.

During her trip to the Pacific, Foreign Minister Penny Wong told reporters that the Labor government remained committed to maintaining the Nauru detention centre.

Some 112 refugees and asylum seekers, first sent to Nauru from Australia in 2013, remain there. This year, Australia is paying Nauru $135 million as well as paying Canstruct, the private Queensland company with the contract for refugee services on Nauru, another $218 million to extend its contract to June 2022. That’s more than $3 million per refugee.

There are about 1300 refugees and asylum seekers who used to be on Nauru or PNG who are in Australia on bridging visas or in community detention. Like the Tamil family, they need permanent visas.

There are still refugees in limbo in PNG and Nauru nine years after Labor imposed the rule insisting they would never be settled in Australia. Labor has a very particular responsibility for offshore detention, and for the nine years of their lives lost to the people who were sent to Nauru and Manus Island.

But if the Biloela family tells us anything, it’s that protest works. Anthony Albanese said that under Labor, no one would be left behind. That’s not true for asylum seekers and refugees; Labor is leaving them behind.

The fight for asylum boats to land safely, to end offshore detention and close the detention centres will be fought and won outside parliament. The same protests, rallies and resistance that stopped the Tamil family being deported and got them back to Biloela are going to be needed for the campaign ahead.

Justice for Refuges rallies, calling for permanent visas for all, an end to offshore detention and resettling refugees from Indonesia, are being held in Melbourne on 19 July, Brisbane on 23 July and Sydney on 24 July to mark the ninth anniversary of Labor’s ban on resettlement of refugee boat arrivals.