A dream betrayed by racism and exclusion 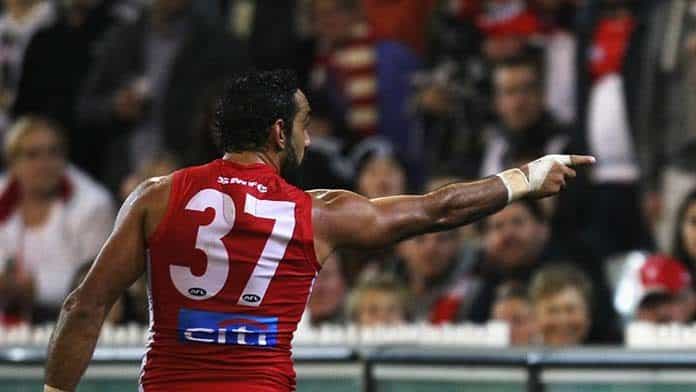 The Australian Dream is a powerful documentary on racism in Australia, but it misses an opportunity to also expose the racist nature of Australian nationalism.

The film focusses on the much-publicised booing of footballer Adam Goodes, who was relentlessly targeted by fans from opposing teams in 2014 and 2015. His appalling treatment by the crowds has led many to simply blame racist footy fans. But the booing was incited by an orchestrated media campaign launched by the conservative press against him after he called out a spectator for racially vilifying him.

The booing intensified after he was named Australian of the Year in 2014. He used the role as an opportunity to speak out publicly against racism and talk about January 26th as Invasion Day, drawing attention to the massacres and dispossession of First Nations people that were central to the colonisation of Australia.

Andrew Bolt and other hard right commentators savagely attacked him for daring to raise these issues and declared that he was “pedalling the politics of racial division”. For Bolt, and those of his ilk, any mention of racism existing in Australian society is an affront because it undercuts the image of Australia as a fundamentally fair society and its legitimacy.

Bolt and the Footy Show’s Sam Newman argued that the booing wasn’t racist, and that Goodes was just being targeted because he was staging for free kicks and, in Newman’s words, “because you’re acting like a jerk”. They would rather people of colour just shut up, copped the abuse and be grateful that they are even allowed to play the game.

The media attacks on Goodes incited AFL crowds so that the racist booing every time he touched the ball kept growing game after game. Tragically, this forced him to take leave from the game during the 2015 season as a result of the stress and pushed him into early retirement.

Stan Grant, producer of the film, powerfully articulates the response of many First Nations people to the booing which reminded them of their own exclusion from the “Australian Dream”.

The film could’ve branched out and looked at the not just the ongoing legacy of colonisation but the racist policies which are still in place and maintain this, like the Northern Territory Intervention.

There are some harrowing scenes where Goodes’ mother recounts her own experience as part of the Stolen Generation. This would’ve been even more powerful if it had been tied to the ongoing theft of First Nations children today, which is skyrocketing around the country.

Throughout the film Stan Grant is at pains to champion the greatness of Australia. He wants an inclusive nationalism, one that can find a place for Indigenous people in the “Australian Dream”. He even describes his and Goodes’ criticisms of racism as a type of patriotism—criticising the country you love so you can make it even greater.

But the problem with this approach is that there is nothing progressive about Australian nationalism, which is built on racism and the idea of dominating the peoples of the South Pacific and Asia.

By appealing to Australian nationalism, Grant opens the door for the right-wingers. They say that Goodes’ advocacy against racism is dividing the nation along racial lines.

But the truth is that nationalism is inherently exclusionary—it is used to divide workers in Australia from those in our region, to exclude migrants and to pedal the myths that colonisation was actually beneficial for Indigenous people. They want us to be proud of “our nation”— but there is nothing to be proud of when it comes to the attempted genocide of Indigenous people.

Nationalism also papers over the real division in society—that between ordinary workers and greedy bosses.

The “Australian Dream” is an idea they sell to us to make us think that we are all in it together, when in fact they exploit us for our labour and chuck us on the scrap heap when they’re done.

When Goodes’ treatment finally forced him off the field in the middle of his last season, fans responded by covering the stadiums with pro-Goodes messages, Aboriginal flags and also a standing ovation in the 37th minute to mark his absence—the number of his jersey. This mobilisation of white and black fans in support of Goodes points the way forward for defeating racism.

Grant’s film is a welcome exploration of the racist media frenzy that engulfs any person of colour who publicly opposes racism in Australia, and how this is tied to the original crime of colonisation. But rather than seeking to incorporate Indigenous people into Australian nationalism, we should use the racism they continue to suffer at its hands as a basis for rejecting that nationalism.