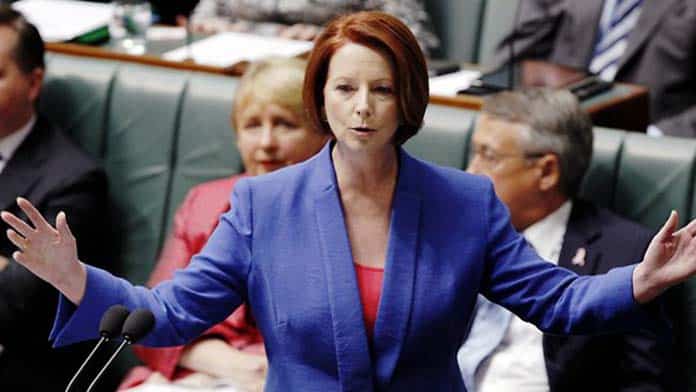 Undoubtedly Gillard as Labor Prime Minister was a victim of a cruel sexism.

As early as 2007 Gillard was attacked by Liberal Party Senator Bill Heffernan as “deliberately … barren”. In 2011 former Labor leader Mark Latham made similar negative comments about her choosing not to have children. Tony Abbott constantly heckled Gillard when she spoke in parliament.

At an anti-carbon tax rally in March 2011 Abbott stood with banners and placards reading “Bob Brown’s Bitch”, “Ditch the Witch” and “Juliar”.

No one should support that filth, but Gillard came late to the fight for women’s rights.

She didn’t respond against the sexism until late 2012, more than two years after she became Prime Minister. In fact, Gillard initially denied that her gender would be a significant aspect of her prime ministership, and only “played the gender card” as she faced electoral annihilation.

The Misogyny Speech reeked of hypocrisy.

It was actually delivered in opposition to a Liberal Party-supported motion calling for the Labor-supported House of Representatives Speaker Peter Slipper to resign.

Slipper’s lurid and sexist messages had been public knowledge for days before Gillard was willing to say anything about them. The speech was a desperate distraction from her government’s defence of Slipper.

On the same day she was lambasting Abbott for sexism, the government (with Abbott’s support) was enacting legislation to cut payments to single parents (who are mostly women) by between $40 and $156 a week.

National Council of Single Mothers and their Children chief executive Therese Edwards says those changes plunged tens of thousands of single mothers into poverty. Their effects are still being felt.

If Gillard were genuine she would at least have spoken to Edwards who, on that same day, was protesting outside Parliament House.

“I wanted to clap and cheer and be part of that empowerment [meaning the speech], but I couldn’t,” Edwards says. “I was an inconvenient reality because I was saying: ‘This is not OK from our first female PM’.”

Gillard did nothing to ease the burden of unpaid work of parents, mostly mothers.

Although from the left of the ALP, she became famous for supporting right-wing policies that affected the poorest women and children. She extended the Howard government NT Intervention.

She cruelly attempted to extend offshore detention to East Timor and asylum-seeker swapping with Malaysia.

Instead of implementing Labor Party policy supporting same sex marriage she allowed a conscience vote which delayed that reform for years.

Revelations over the past few years of widespread sexual harassment and rape allegations show how badly we need a genuine fight against sexism at every level of society.

Yet women in privileged positions like government ministers and CEOs cannot be relied on to lead that fight—they benefit from the low wages of the many women workers in Australia’s sex-segregated workforce, especially in the care economy.

The gender pay gap recently increased above 14 per cent partly thanks to the anti-woman policies of both Liberal and Labor governments.

Instead of challenging business’s priorities, Gillard stood fast in their support, continuing subsidies to the fossil fuel industries.

All women will continue to face such sexism so long as those capitalist priorities continue.

Many feminists paint Gillard’s prime ministership as destroyed solely by the sexism. Beyond the hypocrisy and myth-making her demise illustrated a cruel irony of her own making.