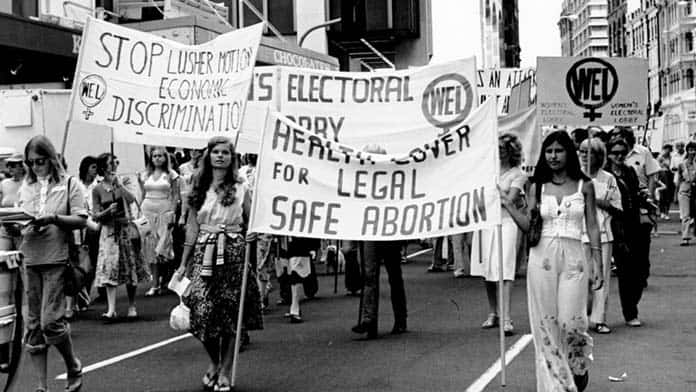 Until 1969 abortion in Australia was illegal, with a maximum sentence of life imprisonment. After that court decisions and law reform began to change this. The radical struggles of the period, including the emergence of the Women’s Liberation Movement, were also vital in securing access in the decade that followed. Abortion shifted from a taboo subject to become a major political issue.

Abortion has always been common. But before 1969, “Women who had means could attend a skilled abortionist; otherwise they went to someone less skilled or tried to abort themselves”, according to pro-choice doctor Stefania Siedlecky. Corrupt police ran a protection system for underground abortion rackets.

The legalisation of abortion saved lives, “abortion still remained the highest single cause of maternal death in Australia until the 1970s”, Siedlecky noted. “Annual deaths from abortion declined from 125 in 1941 to 14 in 1970, but in the triennium 1973-75 there were only 2 abortion deaths”.

From liberal to radical reform

The changing role of women in the workforce and the availability of the pill from 1961, which gave women greater control over the decision about having children, helped shift attitudes to abortion.

Humanist Societies and civil libertarians took the first steps for legal reform, opposing state interference in what they declared were “private” individual decisions including homosexuality and abortion.

They set up Abortion Law Reform Associations during the late 1960s, inspired by the 1967 Abortion Act in Britain which legalised abortion in the first 28 weeks of pregnancy, subject to agreement by two doctors that the woman’s physical or mental health would be endangered by continuation of the pregnancy, or a serious risk of foetal abnormality. In 1969, the state government of South Australia introduced reform along similar lines.

But Liberal Party governments in the largest states, Victoria and NSW, were unwilling to follow suit, despite growing evidence of police corruption and women dying at the hands of back street operators. Under the spotlight, police responded more vigorously against abortion doctors, with unintended consequences.

When two doctors were arrested in Victoria, Judge Menhennitt acquitted them and ruled that the particular abortion was necessary to preserve the woman from serious danger to her life or to her physical or mental health. The Menhennitt ruling acknowledged that some abortions were lawful, setting an important precedent. Doctor Bertram Wainer then set out to test the issue, daring the police to arrest him for performing abortions and threatening to expose corrupt police profiting from illegal abortions. His stand established that abortions could be performed legally.

In Sydney the smell of scandal compelled the government to send the infamous “Abortion Squad” to raid the Heatherbrae Clinic in May 1970, arresting five staff under the anti-abortion law.

Over the next year the Women’s Liberation Group in Sydney held six major demonstrations protesting about the arrests. They submitted a petition with 9000 signatures to the NSW parliament on 20 April 1971. With only 15 Labor MPs voting in support, feminists concluded the prospect for abortion law repeal was “very slim”. But in October 1971 Judge Levine acquitted all Heatherbrae staff and handed down a ruling similar to Menhennitt’s.

The growth of a militant new left would help push the abortion struggle forwards.

The first women’s liberation groups formed in early 1970. They grew out of a period where protest against the Vietnam War became a catalyst for deepening youth rebellion, encouraging other radical movements including Indigenous demands for land rights and a growing strike wave.

The Women’s Liberation Movement (WLM) would use militant protest tactics to break through cultural and political obstacles. Challenging the idea of sexuality and abortion as private matters, they insisted the personal was political.

Inspired by Vietnam and other national liberation struggles, the WLM demanded “self-determination” for women, control over their bodies, equal pay and abortion on demand. Socialist unionist Zelda D’Aprano, a leading equal pay campaigner, joined the abortion campaigns, saying that despite “all the scandal and exposure of the abortion [graft and corruption] trials, women were silent”. The first WLM demonstration in Melbourne, “Contraceptives, not Chrysanthemums!” demanded free contraception and abortion on request.

In November 1971 street marches were held in Melbourne and Sydney for a woman’s right to choose. The following year Women’s Abortion Action Coalitions were formed demanding “free abortion on demand”, and thousands joined marches for abortion rights. These efforts helped establish widespread support.

As early as the 1970 Gallup Poll, 57 per cent agreed that abortion should be legal “in all circumstances” or “in cases of exceptional hardship, either physical, mental or social”, a shift of 9 per cent since 1968. Only 11 per cent opposed legalising abortion.

The radical mood in society led to the election of Prime Minister Gough Whitlam in December 1972. Whitlam publicly supported abortion and sought to push the issue. However, the Labor party also allowed a “conscience vote” where MPs could vote according to their “own conscience”, and against party policy.

In 1973 when federal parliament debated abortion law reform for the ACT, right-wing Catholic ALP MPs used the “conscience vote” to defeat it.

Abortion law liberalisation had only succeeded in three of the six states—SA, Victoria and NSW. Thousands of women would travel to Melbourne and Sydney to access safer abortions.

But the legal changes made medical practitioners the gatekeepers instead of women themselves—no abortion would be lawful simply based on a woman’s choice to have one.

Whitlam also funded women’s centres and refuges, as well as Medibank, the forerunner of Medicare. When it was introduced in July 1975, all women who received “lawful” abortions could access a rebate (subsidy) covering most of the cost of the procedure, Australia-wide.

Because of these initiatives people began to understand abortion as “normalised”, affordable and safe.

Yet the Right never gave up. MP Kevin Harrold raised anti-abortion amendments twice, unsuccessfully, in NSW parliament. Clinics were banned in the ACT in 1978, and subject to ongoing police harassment in NSW.

The core political issue at stake over abortion is women’s right to control their own bodies and sexuality; in order to play a full part in social life.

Anti-abortion groups and the religious right defend what they see as women’s “traditional” role in the family bringing up children. This clashed with women’s demands for equality and the right to work outside the home as well as make their own decisions about abortion, marriage and children.

But women faced a contradiction: capitalism increasingly wanted them as part of the paid labour force; yet the system continued to rely on women in the home to care for and bring up children as part of the nuclear family. Without this unpaid labour in the home, capitalism would have to meet far more of the cost of bringing up the next generation of workers.

These developments created the circumstances for abortion law reform, but change was not automatic.

Beating back the backlash

In 1979 conservative MP Stephen Lusher moved a motion to stop Medibank funding abortion services. WLM and pro-choice supporters initiated broad-based rallies around the country and the Lusher Motion failed 62 votes to 52. Many MPs, concerned about their own support, recognised this as a class issue—that without subsidies working class women would not be able to afford the procedures, but wealthier women could still access them.

After the opening of Queensland’s first abortion clinic in 1979, the conservative Bjelke-Petersen government responded with a new bill banning abortion unless a woman’s life was immediately threatened, and even banned women travelling interstate for the purpose of abortion. The right mobilised with a “Celebrate Life” march and played the “heartbeat of a foetus” over commercial radio. Pro-choice groups including Children by Choice, Labor Women and Women’s Campaign for Abortion, with the support of the Trades and Labour Council (TLC), held rallies and illegal marches. The government retreated.

With this victory it was clear that bans on abortion were unlikely to succeed anywhere in Australia.

The social power of the union movement was a major factor. The Queensland TLC, along with ten major unions, helped build the pro-choice movement in 1979-80, arguing that, “The question of pregnancy termination should be the decision of the woman and her doctor”.

Today most states have laws allowing abortion at the request of the woman until between 16 and 24 weeks of pregnancy. However, availability and access are still a problem. Decriminalisation has been an important step forward but we still need to fight for free access to abortion accessible in public hospitals, and the full right to choose an abortion at any stage in the pregnancy.

Women are now a permanent part of the workforce and over half of union members, with great potential social power. While there is no prospect of the frontal attack on abortion rights here as in the US with the overturning of Roe v Wade, the right has used equal marriage, the Religious Discrimination Bill and opposition to transgender rights to try to maintain the status quo and enforce traditional gender roles.

Wave of anger as US Supreme Court to overturn right to...

The United States Supreme Court is set to wind back the clock after a leaked document revealed it plans to overturn the historic Roe v Wade ruling.