US marches against Texas abortion ban 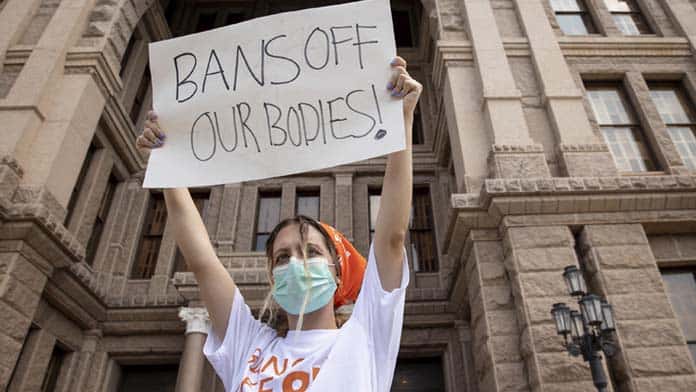 On Saturday 2 October hundreds of reproductive rights rallies took place across the US. The latest protests, part of the fifth Women’s March, came one month after Texas’s near-total ban on abortions went into effect.

The new law, commonly known as the “heartbeat law,” prohibits abortions after six weeks into a pregnancy—before most people know they are pregnant. It is also earlier than when 85 to 90 per cent of all abortions are carried out.

There are no exceptions for rape or incest—and the law also allows anyone to sue patients, medical workers, or even a patient’s family or friends who “aid and abet” an abortion.

The law relies on ordinary people to enforce the ban, awarding them at least $10,000 if they successfully sue anyone who helped provide an illegal abortion. For instance, drivers who bring people to clinics or anti-choice protesters outside clinics can report suspected abortions and be rewarded for it.

A similar bill to ban most abortions after six weeks has also been introduced in Florida.

In Austin, Texas, hundreds gathered. Thousands filled streets in downtown Dallas for a “Reproductive Liberation March and Rally” led by women of colour.

The largest demonstration was in Washington, DC, where protesters marched to the Supreme Court two days before it reconvened for a session in which the justices will consider a Mississippi case that could enable them to overturn federal abortion rights established in the landmark 1973 Roe v. Wade case.

If the court overturns the precedent, abortion access would no longer be protected by the Constitution, leaving states free to ban it, limit it, or allow it without restrictions. Many states already have laws to ban all or nearly all abortions that would be triggered if Roe were overturned, and abortion rights would not be protected in over half the 50 states.

The day before the marches, the Biden administration urged a federal judge to block the Texas law while a legal challenge works its way through the courts. The judge issued a temporary pause, but a higher court quickly overruled this.

The Supreme Court, in a 5-4 decision, has already denied a similar request. In response, for the first time ever, approval ratings for the Supreme Court dipped below 50 per cent. The full hearing will be one of a series of cases that will test whether the US Supreme Court will uphold or overrule Roe v. Wade. A strong movement in the streets could force them to recognise the country’s pro-choice majority.

The first Women’s March was held in 2017 on the day after President Donald Trump’s inauguration. But the October marches were not as well-attended.

Called by a liberal coalition of pro-Democrat organisations, the message at most demonstrations around the country was to vote Democrat. Nine months into a Democratic presidency and with abortion rights still under siege, it’s little wonder that fewer people turned out.

The Biden Administration is not supportive of the restrictive laws. But the Democrats are fair-weather friends when it comes to abortion— Biden himself originally opposed Roe v. Wade. He has voted throughout his career against federal funding for abortions. But popular opinion and movements for reproductive justice have pushed Biden to back Roe. We need movements today that can make the Democrats’ long time flip-flopping on abortion politically untenable.

Just a few years ago overturning Roe seemed impossible. Now it is a real possibility. There is a palpable rage against the Texas ban and people know it is a prelude to more attacks.

The general de-mobilisation around the election, coupled with the feeling that we are waiting for the Biden administration, or progressives in Congress, to act, have undermined building a movement that could actually pressure the Supreme Court to affirm abortion rights.

In the immediate days following the Texas ban announcement, it wasn’t clear if the mainstream women’s organisations were going to call anything in response.

In this context, the October protests were an encouraging sign. For all the limitations of the Women’s Marches, they are attracting a new layer of people who want to defend abortion.

The way Roe was won, and the way to defend it, is to build a huge movement that threatens the legitimacy of an anti-choice court. There needs to be a socialist pole inside these marches—and open, democratic meetings to plan them—to raise these arguments and demands.

By Virginia Rodino and Clare Lemlich Marx21 US