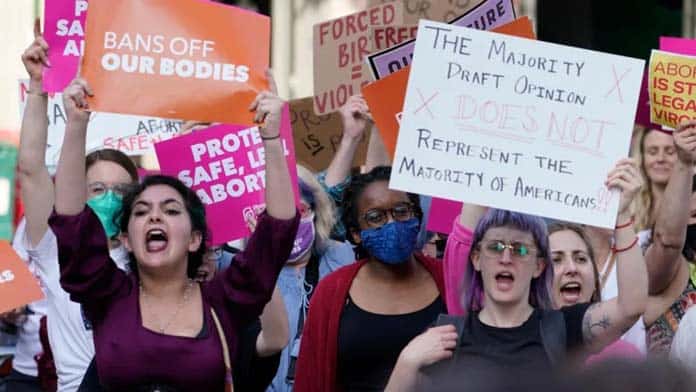 In the 1960s and 70s, the women’s movement fought for reproductive rights and safe access to abortion. But now the United States Supreme Court is set to wind back the clock after a leaked document revealed it plans to overturn the historic Roe v Wade ruling.

In 1973, the Supreme Court in Roe v Wade ruled that restrictions on access to abortions by the states were unconstitutional, effectively decriminalising abortion in the US.

But that hasn’t stopped restrictions being imposed on abortion—from 24-hour waiting periods, to laws requiring parental notification and most recently, the state of Texas outlawed abortion after just six weeks. Between 2011 and 2020, 480 state restrictions were imposed limiting access to abortion.

Already, conservative legislators are moving to outlaw abortion in more than 22 states. Thirteen states have anti-abortion trigger laws that will come into effect if Roe is overturned.

In Mississippi, abortion could be banned after 15 weeks. In Oklahoma, legislation has already been signed that could outlaw abortion in all but exceptional cases, while a ban on abortion after six weeks in Idaho has been temporarily stalled by a Supreme Court order.

Overturning Roe v Wade won’t stop people having abortions, but it will make them less safe and less accessible.

If states are free to decide abortion laws, 25 million people would completely lose access, according to Planned Parenthood. Another study suggests banning abortion could lead to a 21 per cent increase in pregnancy-related deaths.

Limiting access to abortion will disproportionately affect Black, trans and poor women who will have to cross state borders to access safe, legal abortions.

Support for abortion is widespread, with 80 per cent of Americans supporting abortion in all or most cases, and 69 per cent supporting Roe v Wade. But Republicans and the right have been preparing the ground to attack abortion rights for years.

Trump’s four years in office have emboldened anti-abortion activists. His three Supreme Court appointments, including Brett Kavanaugh who has been accused of sexual assault, has stacked the Court with conservatives, giving them a 6-3 majority. In a 2016 debate against Hilary Clinton, Trump claimed he was deliberately “putting pro-life justices in the court”.

Yet the pro-choice movement has been continually demobilised through channelling activists into campaigning for Democratic election candidates.

With the US midterm elections approaching, the Democrats are again hopeful that people will vote to elect more pro-choice politicians. In the weeks after the draft decision was leaked, the Democrats received more than $7 million in donations.

This approach has failed. The Democrats have had ample opportunity to codify Roe v Wade and abortion rights in law. In fact this was a promise of Biden’s 2019 presidential campaign. But in May this year, a vote to codify Roe in the Democratic-led Senate failed to pass, with fewer than 50 votes.

The Democrats need 60 votes to overcome a filibuster—making it almost impossible to gain enough seats in the midterms to win a vote on the issue.

The Democrats are not reliable supporters. US President Joe Biden, a devout Catholic, said in 1974: “I don’t think a woman has the sole right to say what should happen to her body.” And in 1976 it was Democratic president Jimmy Carter, with the support of Biden, who enacted the Hyde Amendment preventing federal funding being used for abortion.

Today Biden publicly supports the right to an abortion but has been reluctant to talk about the issue.

Access to abortion has been decriminalised across Australia, with South Australia becoming the last state to enshrine a legal right in 2021. But there still exists a tiny but vocal pro-life movement that is emboldened by the likes of One Nation and the conservative Liberals.

Victorian state MP Bernie Finn has just been expelled by the Liberals for arguing that abortion should not be available even for rape victims. Finn said: “Babies should not be killed for the crime of his or her parent.”

While abortion rights are not up for debate in Australia, a decision on Roe v Wade could encourage anti-abortion activists to push for further restrictions. Abortion access is nearly non-existent in the regions and mostly provided by private clinics. Any erosion of abortion rights would make accessing abortion even harder.

The Roe v Wade decision is a warning that it is possible for the right to reverse these gains. And the US is not alone. In 2021, a Constitutional Court ruling in Poland banned the majority of abortions, which saw protesters defy coronavirus restrictions to take to the streets in huge numbers.

It has been mass movements on the streets that won abortion rights, access to birth control and rape and domestic violence services. Now a mass movement in the US is needed to fight to save those rights.