Inside the Fairfax strike: details from the frontline 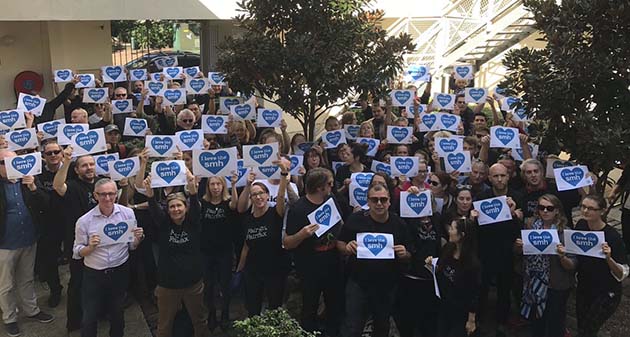 As Fairfax journalists head back to work after seven days on strike, Solidarity spoke to a journalist at the Sydney Morning Herald on the impact of proposed job cuts and how the unlawful strike unfolded.

What was the mood initially in your first union meeting after you heard about the job cuts? How did it get to the point where you decided to go out on strike for a week? Were there any important arguments made by people who swayed the group?

The stop work meeting on Wednesday was authorised for 30 minutes and in the end went for about an hour to make sure everyone had time to air their concerns. By the time we got to about 40 minutes it was clear everyone was very vocal and the meeting would go for a while longer, so we were technically on strike—it was then just a matter of how long to stay out.

One important argument, made fairly early on, was that we should go for at least 48 hours to affect the Saturday edition, which is the best-read of the week. Towards the end of the meeting, a senior journalist—who would have been part of the budget lockup—said we should go for a week to wipe out the budget as well, and show how serious we are. The floor agreed almost immediately.

Everyone was very angry that, once again, management resorted to slashing and burning instead of finding other ways to cut costs. In a meeting with staff a few weeks ago, Editorial Director Sean Aylmer said it would be technically possibly to make the $30 million of cuts without shedding staff, but he said it is very unlikely that will happen. When you’re talking about lives and livelihoods, it’s extremely insulting to say “we could keep you, but we’ll fire you instead because it’s easier”.

Was there much discussion of the fact it would be an illegal strike?

I think we all realised from the outset that it would be unlawful, and we fully expected that we could be ordered back to work by the Fair Work Commission at any time. There were already news cameras out the front of the office as the meeting began, so there was a sense of elation once we all walked out together that we had made this strong statement. One person, whose EBA exempts them from going on strike, cried as the rest of the staff walked out. They were upset they weren’t able to stand with everyone else.

You mentioned that some teams could lose almost all of their staff and be left with one or two people? Can you provide some more detail on what the threatened cuts are?

The cuts will target all people in the newsroom—contributors, casuals, part-time workers and full-time workers. The headline figure is the 125 FTE jobs that will go. In his announcement, Aylmer said, “we will be looking across all parts of the newsroom, at the end of the redundancy program we expect there will be significantly fewer editorial management, video, presentation and section writer roles”.

Most importantly, the “section writer” roles point to the people in arts and entertainment, especially those who write reviews and analysis of plays, books, music and more. The proposal is to assign those stories to “regular” journalists, with no dedicated arts reporters in the future, and some gaps filled in by contributors. This is unfair to both the journalists who are getting fired, and the others – probably young, at the beginning of their careers—who are expected to write to the standard of arts experts.

The contributors will be paid by article, instead of the industry standard of being paid by the word, which will result in less money for freelancers who are trying to pay their rent. Aylmer says there will also be an “audit of all contributors”, but has not said who will perform this audit or who will decide which contributors to keep. The casual work force will also be slashed by “around $3 million per year” across the SMH, Age and AFR. Aylmer says “we will significantly reduce the use of the casual workforce”. At the SMH, the casuals are primarily working in weekend breaking news shifts and production of the iPad and the website.

What have members been saying ought to happen in terms of tactics? Is anyone suggesting what the next step is after the week is up?

The union has been very open to considering suggestions from striking staff. One person suggested we go on a bus to Canberra to highlight that SMH and Age journalists would not be there for the budget, so the union organised to get us there. The main tactic agreed by everyone is raising awareness of what is happening, and getting readers to put pressure on the company through signing petitions and sending letters to CEO Greg Hywood.

Journalists have been out every day getting people to sign petitions, and most people can’t believe the company is cutting jobs—again. When we go back to work on Wednesday morning it will be with our heads held high, having received messages from support around the world—and solidarity messages from the ABC, Guardian Australia and News Corp newsrooms, among others. On Wednesday the union will go back to the negotiating table with the company to see if any of the 125 jobs can be saved. It will also be important to ensure these redundancies are only voluntary and no one is forced out the door who doesn’t want to go.

How have management been responding to the strike? You mentioned that they had sent threatening letters. Also that they were using some of the regional papers to recycle copy. Can you elaborate on that?

When we first went on strike, Sean Aylmer and Chris Janz sent a joint message to all staff. It said the company will deduct employees’ pay for the duration of the action, “the FWO [Fair Work Ombudsman] has indicated to the company that it is monitoring the situation”, and, “the company may consider taking disciplinary action against those employees who participate in any unlawful industrial action, which may include termination of employment”.

There are several roles that are exempt from striking under the EBA, including the print editor, digital editor and a handful of other staff, so they worked through. Management attempted to ask others to work, including the head of the Canberra Bureau, to no avail. They have been using stories from Fairfax regional newspapers including the Canberra Times and Newcastle Herald, heavily drawing on wire copy including AAP, and taking unfinished stories from journalists’ personal folders on their computers and running them. In one case, in their desperation for copy, they ran an embargoed story and were told to retract it. Where cartoonists are striking, they are running old cartoons.

There are also a handful of people who are breaking the strike, including notable freelancers, and some young inexperienced casuals who may not realise the gravity of what they are doing. Management have also blocked the swipe cards of people from Sydney and Melbourne so they physically can’t enter ODI (1 Darling Island Road) and Media House. On Monday, before journalists went to Canberra, one tried to use her swipe card to get into ODI to use the bathroom. Her card didn’t work, and when she asked security to let her in, she was told to leave.

Any idea of numbers of people who have been scabbing on the strike? What has been the mood of the members towards them?

No idea of exact numbers, but we have found out the names of some people who are scabbing, and it’s extremely disappointing. When we return to work, I don’t think there will be anything said, but we will forever look at them in a different light. To say their personal circumstances necessitate their scabbing is, frankly, not good enough. None of us enjoy going unpaid for a week, and some people will be in a tougher position because of it, but it’s better to forego a week’s pay than be forcibly made redundant.

When is the next union meeting and are there any more rallies planned?

We’re going to meet on Wednesday morning before we walk back into work. At the moment there aren’t any rallies planned after that.

I would also like to highlight the incredible support we’ve received from other unions, even when they perceive some journalists as being “against” strikes, or regularly branding them illegal in their stories. In Victoria, the Trades Hall helped with sausage sizzles, provided tea and coffee and facilities so journalists could make badges, and turned up at their Media House picket line to show solidarity. In Sydney, when we were out on the streets signing petitions, some union members bought journalists coffee and took stacks of petitions back to their work to get them signed.

Moving ahead, I strongly hope jobs will be saved—especially crucial arts writers, who have had messages of support from Peter Greste, John Safran, and other high-profile people.

Staff are also strongly opposed to a proposed takeover from TPG. We have no confidence they will protect journalism, and fear a sell-off of assets and an even steeper slash and burn. It is extremely insulting to have the Age and SMH described as just being a distribution arm for Domain stories.