Casuals win against wage theft at the University of Melbourne 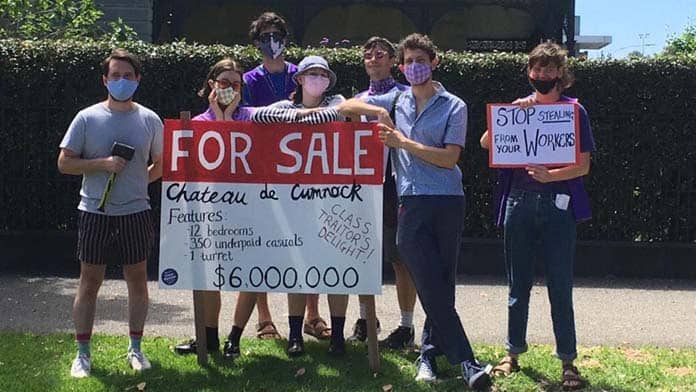 In the final weeks of 2020, union members at the University of Melbourne dealt a massive blow against systemic wage theft. Following a raucous rally outside the multi-million dollar mansion of Vice-Chancellor Duncan Maskell, up to $15 million is now flowing to hard working casuals. The struggle shows that even in the midst of a financial crisis, with university management crying poor, a fighting union can win gains.

The tertiary education sector is highly casualised. As is the case in universities all over the country, the vast majority of staff at the University of Melbourne are employed in either casual or fixed term roles.

Most teaching at the University of Melbourne is performed by casual tutors and it is the worst kept secret on campus that they are not paid for a significant portion of the work they do. It is simply impossible to adequately prepare for tutorials, provide assistance to struggling students, and mark assessment tasks within the time that the university allots (and pays) for them.

For over two years casual members of the National Tertiary Education Union (NTEU), organised through the NTEU Casual and Session Staff Network, have been fighting to change this, and to have years of stolen wages returned.

From the outset the network has been committed to open, democratic organising and public campaigning alongside industrial strategies.

Rather than attempt to solve our disputes solely through letters to management and lodging formal disputes, the network has applied pressure through—among other tactics—petitions, rallies and occupations. Hundreds of casuals have been recruited to the union via this strategy, and significant improvements to casual conditions have been won.

Among our most important gains occurred at the beginning of the COVID-19 crisis, when the casuals network organised a rally to demand COVID leave for casuals, who ordinarily would not have access to sick leave. Over 100 casuals marched across campus and occupied the foyer of management’s “COVID-response team”. Management caved the same day.

Since its inception the casuals network has had wage theft in its sights. At the end of 2019, following two rallies and occupations of the Dean of Arts’ office, negotiations began with management to rectify their use of an illegal “piece rate” for marking and subsequent underpayment of casuals for this work.

Management tried everything to avoid paying casuals for the work we do. They quibbled over how long marking takes, continually questioning casuals’ ability to understand the requirements of their work.

Casuals refused to back down. Rank-and-file delegates attended every meeting with management to make sure that not only would the underpayment of marking stop, but that casuals received full backpay for years of work. Late in 2020 negotiations reached a crisis point. The NTEU took management to the Fair Work Commission for mediation, but it was clearer than ever to casuals that we would not win through the courts alone, so we planned a rally outside the Vice-Chancellor’s mansion.

Melbourne was just easing out of lockdown and outdoor gatherings were limited to 50 people. We were not willing to limit our protest to 50 people and decided that we needed to find a way for everyone who wanted to attend to be able to, even if that meant pushing at the edges of the restrictions.

Protests around refugee rights, Black Lives Matter and Invasion day have shown it is possible to protest in COVID safe ways. We did the same by asking everyone to register, wear masks, socially distance and stay in groups of 50 or less.

After threatening two delegates with legal action over the demonstration, just half an hour before it was due to start, HR called and agreed to pay all wage theft claims in full. Just weeks later, casuals received their backpay. Many people’s claims were worth tens of thousands of dollars, with estimates total claims could reach $15 million.

The casuals network at the University of Melbourne has grown to be one of the biggest and most vibrant in the country and casuals are now a force to be reckoned with on campus.

Casual issues are now a serious focus of the broader NTEU branch, and increasingly permanent staff are looking to the casuals campaign for inspiration to fight redundancy rounds and job cuts. Just two years ago, we were a small handful of union members who were sick of the exploitation casuals face and disappointed with the official union response to casualisation. It was through taking decisive action, calling rallies in swift response to issues as they arose—whether it was the Working With Children Check, payment for lecture attendance, COVID leave or wage theft—that we were able to build activists and recruit new members to the union.

The experience at the University of Melbourne shows that, contrary to ideas based on US union organiser Jane McAlevey’s book No Shortcuts, there is no step-by-step formula for organising. If we had waited to have a “super majority” (or even a majority of casuals) recruited to the union to take action, we would still be waiting.

It was the network’s willingness to take action quickly, even with a small group of people initially, that enabled us to build a broad, fighting campaign capable of taking on university management and winning. As we head into enterprise bargaining, we need to take the same decisive and ambitious approach in order to win an agreement that decasualises our sector.