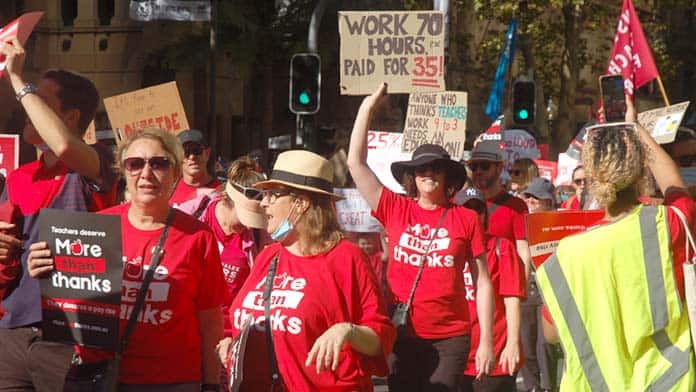 The NSW public sector union campaign has stalled, after the teachers’ union called off a strike day in October and the rail union delayed further industrial action following legal threats.

Despite giving every indication that 12 October would be a statewide strike, NSW Teachers Federation officials downgraded it to a day of wearing union shirts and a rally before work that many teachers were unable to attend.

In a sign that the teachers’ union leaders are giving up on industrial struggle altogether they have told members that a “detailed state election” plan will be presented at the next union council meeting.

Every unionist should want to see the end of the Perrottet government. But we can’t just rely on electing a NSW Labor government at the state election next March to deliver our demands.

NSW Labor has promised to scrap the wages cap and open a new bargaining period for teachers, without saying what a fair pay rise would be. It says it is “committed to putting forward a comprehensive education plan” but as yet there are no details. Its plan for hospitals goes nowhere near delivering the nurses’ demands for ratios.

Calling off the industrial campaign now cedes ground to Perrottet and would leave us in a weaker position should Labor win. Continuing strikes to win our demands could also help to sweep the Perrottet government from office.

Teachers have been on strike three times since December 2021. After a decade of no strikes, the action has been a sorely needed shot in the arm. Nurses have taken four days of strike action this year.

However, one-day strikes that have been spaced so far apart have limited disruption and not produced enough pressure on Perrottet to give in.

Union officials have suggested that teachers are getting tired of striking and should focus on campaigning to elect Labor.

But this misreads the mood. Union members have been raising questions about the strategy but that’s because they can see that occasional, one-day strikes are unlikely to force the government to back down.

TAFE teachers are now entering the fray. After convincingly defeating a non-union ballot they have begun their own protected stoppages around the state. This presents another opportunity to call joint strike action.

A joint escalation of strikes from teachers, nurses and rail workers could push the momentum in our favour and give us a chance of winning our demands.