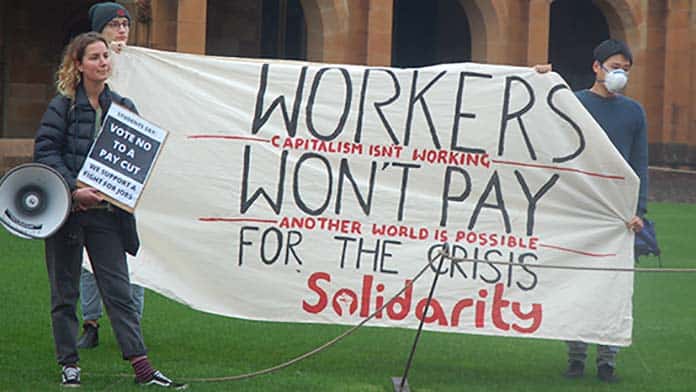 Treasurer Josh Frydenberg boasts that “Australia is leading the global economic recovery” and that living standards have risen by a “remarkable” 5.8 per cent over the past year.

Some people are doing very well indeed. According to the Australian Bureau of Statistics (ABS), company gross operating profits rose from 2.6 per cent in March 2020 to 11.9 per cent a year later.

But the headlines disguise the fact that millions of workers are doing it tough, whether they have a job or not.

The ABS reported that at the end of March there were 1.1 million people holding down at least two jobs—covering 7.5 per cent of all jobs. Both are record figures. The number of people with two or more jobs has grown by a third since the end of June last year.

This reflects years of slow wage growth that have left most workers struggling to cope with living costs.

A thinktank, the McKell Institute, has reported that the average Australian worker would be earning $254 more a week if wages growth had continued at the rate achieved under the last Labor government.

There are a range of factors at play here including public sector pay freezes, wage theft, modest minimum wage increases and, of course, anti-union laws that contribute to very low strike rates.

Another is the proportion of workers in full-time jobs with leave entitlements.

Alison Pennington at the Centre of Future Work reports that, in 2017, the number of such “good jobs” fell to just less than half of all employment for the first time on record.

She writes: “It’s still low, with around half (50.5 per cent) of all jobs full-time with paid entitlements at end-2020. This means, around half of employed Australians now confront one or more key dimensions of insecurity in their work (casual, part-time, marginal self-employment).”

Another reason workers are facing the pinch is revealed in inflation figures from the ABS that show the cost of basics has been rising twice as fast as the cost of luxuries.

The ABS is using a new method for calculating the level of inflation for necessities like food, housing, healthcare and transport separately from the inflation rate for discretionary items such as takeaway meals, alcohol and holidays. Together they make up the Consumer Price Index (CPI).

As Emma Dawson wrote in The Age: “Broken down this way, the figures released last month reveal that, during the ‘dog days’ before the COVID recession, the price of non-discretionary items increased by 14.8 per cent, while discretionary inflation was 12.9 per cent.

“Not too different—but when you take out the cost of tobacco … discretionary inflation was just 6.4 per cent. As less than 15 per cent of Australians are regular smokers, this lower figure is a more accurate reflection of the typical household.”

This is bad news for people on benefits such as JobSeeker, Parenting Payment Partnered, Special Benefit, Youth Allowance and Austudy, which are adjusted in line with overall CPI movements. (Age Pension, Service Pension, Disability Support Pension and Carer Payment rates are only partly linked to CPI.)

When benefits go up in line with the CPI figure, recipients are falling behind, given that they spend all their income on essentials whose prices are increasing at a much higher rate.

Jobseekers are also facing a fresh Coalition attack. People making new claims will not get paid until they have signed a job plan, which takes on average ten days.

The result is, according to the government’s own figures, that this change will affect about 144,000 jobseekers each year, with each to lose $450 in payments on average.

The Coalition are presiding over more poverty and misery. But we know there is an alternative.

In the middle of 2020, the Coronavirus Supplement meant poverty was briefly abolished.

According to the ABS, the share of disposable income going to the bottom one-fifth of households leapt from 4 per cent to almost 12 per cent.

People were able to pay bills, buy food and have the occasional treat without stress.

As a minimum, we need to fight for Jobseeker to be increased to $80 a day, for higher pensions and for more public housing.

Poverty is imposed by capitalism. It can be abolished if we resist.

Inequality and the class divide

It’s widely acknowledged that inequality is growing. Behind this is the enormous wealth and power of a tiny minority—the capitalist ruling class, argues Miro Sandev

Class war? Not from Labor

As opinion polls for Labor keep falling, Julia Gillard and Wayne Swan are trying to recast the government as the friend of working people....

Forget the spin, this is no battlers’ budget

Wayne Swan has been accused by the media and Tony Abbott of waging class warfare with the budget. We wish. Labor’s obsession with achieving...