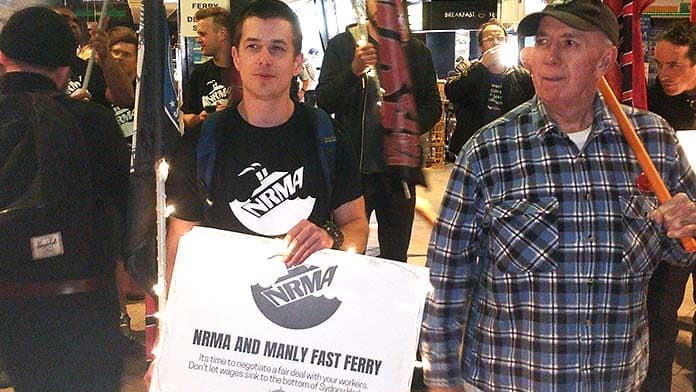 Workers at Manly Fast Ferries in Sydney have staged a series of strikes fighting for better pay, secure jobs and safety.

But so far the owners, NRMA, are not budging from their insulting pay offer and refusal to immediately convert casuals to permanent positions.

The 80 workers, who are almost all casuals, have organised four successful strikes against the company. These have varied from one or two hour stoppages, up to full-day strikes.

Initially the company attempted to bring in scab labour to run the ferries during the strikes, but the Maritime Union of Australia organised the workers to successfully block the ships from docking at Circular Quay.

Since that action, NRMA has backed down and just cancelled services when the union called a strike. The latest full day strike saw the cancellation of all fast ferry services on the busy Manly-Circular Quay route, as well as tourist charters and regular services on five other routes on Sydney Harbour.

Manly Fast Ferries and the union have been negotiating for almost four years, since the company gained the government contract to run the service.

Eighteen months ago, NRMA took majority share in the company but the workers saw no change in their low pay, conditions and safety issues.

But with the help of the union, workers started to turn things around, MUA delegate Brock Mamo told Solidarity. “When the MUA stepped in on the vessels and brought the unsafe nature of the vessels to the company’s face and the crew got to witness a lot of it, it really put a lot of their faith that the MUA is here to fight for its members,” he said.

The company did not have a proper fatigue management policy which was making it dangerous, as boat captains would get sometimes only a few hours’ sleep.

“However, there was a big problem if you spoke up,” said Mamo.

“It was called death by roster: because you’re casual they would cut your hours until you can no longer live and would have to find work elsewhere.

“We have changed that now, because we fought. Now if the company does not provide proper fatigue management then they have to pay them double time for the entire next shift, which the company avoids.”

Getting a win on safety helped boost union membership from around 40 per cent to almost 100 per cent and has given the workers confidence to fight on pay and secure jobs. The workers are being paid according to the tourism and charter boat award, instead of the award for commuter ferries like similar workers at Sydney Fast Ferries. This means they are drastically underpaid.

NRMA has offered a one-off increase of 10 per cent and 2.5 per year after that, but this is still well below the ferry award rate and industry standards. The MUA are asking for $67,000 a year for deckhands, going up to $94,000 for captains.

This bizarre situation is the result of privatisation—the Fast Ferries service was contracted out separately to the operation of the regular Sydney Ferries.

Casualisation is another major sticking point. The workforce is 95 per cent casual and still doesn’t have a guaranteed number of hours. NRMA have over-supplied the workforce and dropped some people’s hours.

The union has been pushing for conversion to permanency for people who have worked consistently for over six months. But the threshold for this is a minimum of 32 hours weekly and the company has been cutting workers’ hours in order to avoid giving full-time positions.

“They want to keep the workforce casualised,” Mamo said. “And that’s where we are standing strong because we can see what they’re doing and we’re not going to sign a deal which is going to allow them to continue doing this.”

NRMA have said they are prepared to look at converting half the workers to permanent but with major caveats, including phasing this in over a two-year period. But by the time that happens, the government contract will only have six months left and there is no guarantee NRMA will retain it.

“We will continue to escalate with the option of rolling stoppages,” said Mamo. “Last time around, when we did the rolling stoppages that’s when they caved in. We’re remaining optimistic that we won’t have to get there, that NRMA will come to the table and put some good deals forward. However, if that doesn’t happen we will need to escalate until we get action.”