No time for delay in fight to save uni jobs 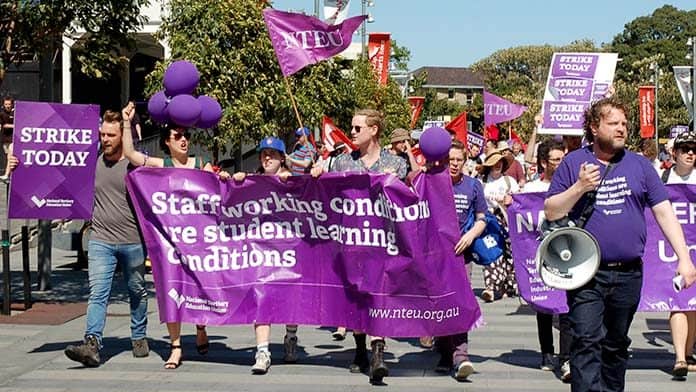 Across the Tertiary Education sector job cuts are coming in thick and fast, with international student revenue down and the Morrison government refusing to throw public universities a lifeline, denying staff JobKeeper payments. But private universities, including Notre Dame, Bond, Torrens, the University of Divinity and the Sydney campus of New York University all received an exemption.

At the Australian National University (ANU) 465 jobs have been lost, the University of New South Wales (UNSW) has made redundant 3.8 per cent of its workforce and at RMIT at least 1200 staff have been sacked. The actual number of jobs lost is unknown with many fixed-term and casual staff losing work hours or simply not having their contracts renewed.

Voluntary redundancy rounds have also been pushed through at a number of universities including RMIT, UTS, Macquarie University, Monash and UNSW.

We can’t accept voluntary redundancies as inevitable. They will mean jobs lost permanently from the sector, and increased workloads for those who stay. And in a sector already plagued by casualisation and on-going wage theft, staff cuts inevitably mean cuts to the quality of education.

At most campuses the National Tertiary Education Union (NTEU) has done little to fight this, and in many cases is still pushing for workers to make concessions on wages and conditions.

However at the University of Sydney, the NTEU Branch has committed to campaigning against voluntary redundancies and lodged a change management dispute with the Fair Work Commission over the lack of consultation around the process.

With managers at Sydney University being asked to submit budget plans with up to 30 per cent cuts to staff budgets, the union is rightly concerned by the workload implications of voluntary redundancies.

Revenue losses for 2020 are better than initially projected and management is using the COVID crisis as cover for savage cuts and restructures that were already planned.

According to Sydney University NTEU Branch President Kurt Iveson, the University is now on track for a $60 million surplus in 2020 and a projected surplus of $100 million for the next five years.

In August a national assembly of university staff voted to support unprotected industrial action to fight job cuts. Protests and other forms of campaigning are vital to build towards this.

Given the difficulties of COVID restrictions, the NTEU NSW division rally on 13 October was an important step forward. Sixty union members gathered in Victoria Park in groups of 20 to protest Federal Education Minister Dan Tehan’s funding reforms and the ongoing jobs crisis in the sector.

The rally was poorly advertised and no serious effort was made to turn out delegates. But it was significant that the union was able to successfully defend the protest in the NSW Supreme Court from police attempts to ban it using COVID rules.

This has opened up space for future, larger demonstrations against the cuts. Already the Sydney Uni NTEU branch has felt confident to call another protest against cuts and police repression on campus for 28 October.

NTEU NSW State Secretary Michael Thomson told the rally that it was important that members were gathering “under trying times” because the “right to protest is central to what unions do.” Workers’ rights including leave and workload provisions, “were won because we struggled for them”.

The protest also addressed the jobs crisis in the Tertiary Education sector with the NTEU estimating over 20,000 full-time equivalent jobs will be lost, with 30,000 workers being pushed out of the sector.

Ensuring the NTEU steps up the fight will require a push from activists across the campuses. The call for the October rally came initially from the National Higher Education Activist Network who got resolutions through the branch committees at Sydney Uni and UTS.

At the first members’ meeting at UTS in three months on 21 October, a motion was overwhelming passed to organise a protest on campus for 18 November. This needs to spread to other campuses across Sydney and the rest of the country, to build a united struggle against the crisis facing the sector.

Across the board university management are sacking staff left, right and centre instead of drawing on their borrowing capacity and other non-staff saving measures to see out the crisis.

Unionists must stand together to challenge management’s austerity measures and job losses. And we must continue to demand that the Federal government step in to fund the revenue shortfall. There can be an alternative vision for public education, but we’re going to have to fight for it.

Liberals hide behind COVID to force further cuts and marketisation of...

It’s widely known that Australian higher education funding has been hit hard by COVID-19. Less well understood is that under the cover of the crisis the government has been decisively restructuring university funding.